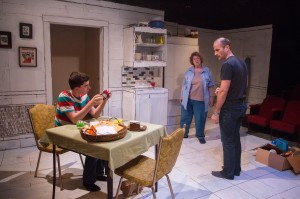 A topical family drama that reaches its true heights in its comic moments, The Fine Print’s production of Erik Gernand’s “A Place In The Woods” is unassuming and refreshingly unpretentious. Seating the audience on either of two sides of the homespun sparse kitchen which is the sole setting lends a fly-on-the-wall feeling as we witness a personal, familial tale wherein the decay of aging leads to revelations over a tragedy that occurred in the glow of youth—a heartbreaking fall from innocence that has sullied all the years since with deceit, distrust, and lingering loathing.

Shaun (James Bould)—gay, urban, successful, worldly, impatient—returns to the small-town scene of his teenage misery with his own thoughtful and inquisitive teen son Alex (Jacob Bond) in tow. The family matriarch (Barbara Berndt) has been acting increasingly alarmingly—the onset of Alzheimer’s is presumably to blame—and the begrudgingly responsible Shaun returns to the rickety house where mom and Shaun’s less reliable older brother (Mike Rice) still reside. All the festering sarcasm amongst the adults of the family stems from the death of the older brother’s best high-school pal, who it turns out was also Shaun’s first love. The most somber moments ring true and nearly all the comic bits—of which there are a welcome many—are as funny as any of the better sitcoms but with more emotional honesty. Some of what falls in the middle of the spectrum between tears and laughter affects a bit of an After School Special earnest prosaicness but this is outweighed by the heft of both the more dramatic and the more hilarious exchanges. 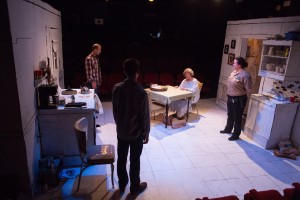 The cast wins the audience over from the start—a good thing considering the close quarters. Bould allows Shaun to be downright unsympathetic and unlikable at first in his smug, distant aloofness while slowly revealing his more compassionate and vulnerable side. Rice alternates between casual resignation and determined optimism—yet occasionally threatening—as the screw-up brother aimlessly aiming to make right. Bond shows much promise as the understanding but demanding son. Berndt elicits our empathy while raising our suspicions as the fading mom who increasingly clings to her deepest fears as her grip on the everyday slides further along. And Natasha Tsoutsouris turns what could be a hackneyed role as a goofy homegrown towny lifer police chief into a riotous showcase.

The whole thing takes place in Indiana and the design, staging, characters and dialogue all impart a hopelessness appropriate to your worst conception of our neighbor to the east. (It is east of here, right?) I’ve been there once and I’m no more eager to return than Shaun is at the start of his family’s journey out of dysfunction. Gernand’s script is an endearing mix of desolation and humor, and Patrick Kenney’s direction yields a surprisingly arresting evening with this family we meet at a critical and long overdue moment of truth. (Raymond Rehayem)