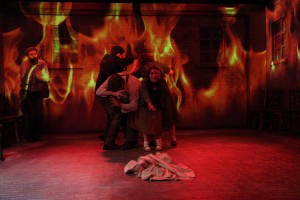 The World War II massacre in Jedwabne, Poland was long considered to be one of the worst Nazi war crimes; hundreds of Polish Jews were trapped in a barn and burned alive. But while Poles historically blamed occupying Nazi forces, recent findings determined that an angry Polish mob served as the real killers. Tadeusz Slobodzianek tries to make sense of the seemingly senseless, looking at this complicated impulse to turn on friends, neighbors and in this case, classmates.

The piece follows schoolmates as they endure the shifting political sands of 1930s and 1940s Poland. The town’s communities are slowly marginalized; the Jews are ostracized as prayer is introduced into the classroom by the Catholics, and the Catholics are then pushed aside by the invading Soviet Union as the local Catholic Club is transformed into a cinema. Hostilities reach the boiling point as the Nazis invade Poland; it doesn’t take much German influence for neighbor to turn against neighbor.

Thankfully, Slobodzianek’s script refuses to simplify the issues at hand; the villains’ actions, while horrible, are explained with empathy.  Ryan Craig’s adaptation seems stiff but manages to explore the town’s degradation with surreal black humor and a clear understanding of the rationalizations that all involved engaged in.

The ensemble successfully navigates the bizarre terrain of a terrified countryside.  Standouts include Rebecca Sohn, whose dignity anchors a bizarre vignette in which her Jewish schoolgirl marries a Catholic classmate to avoid death, and David Darlow, whose cataloging of family members lost in the town’s pogroms is heartfelt and devastating.

Director Nick Sandys’ lively staging keeps the monologue-heavy script from getting bogged down in the speeches; John Boesche’s projections embroider Joe Klug’s necessarily basic set. The tech supports the complicated story and doesn’t overwhelm it. The piece is a detailed, balanced examination of human nature at its worst and its best. (Lisa Buscani)