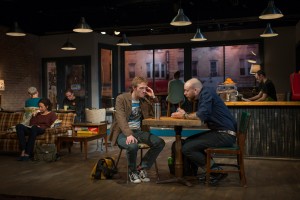 It’s been one of those days for Jamie (Brett Schneider), the shaky protagonist of Next Theatre’s “The Great God Pan.” First, he discovers that his live-in girlfriend Paige (Kristina Valada-Viars) is pregnant, a development this man-child is not prepared for. Then Frank (Matt Hawkins), a long-lost grade school friend, tells him that he may well have been molested decades ago by Frank’s father—an incident that Jamie cannot remember, either because it never happened or has been strategically forgotten.

Jamie’s attempt to cope with these two entangled situations is at the heart of playwright Amy Herzog’s seventy-five-minute work. Is his inability to commit to Paige due to a repressed history of sexual abuse? Is his poor recollection of childhood a means of warding off traumatic memories? Is his aura of anxiety and defensiveness a symptom of past horrors or just his tightly wound, default personality?

Unfortunately, we never quite learn the answers to these key questions, as Herzog has written only the first two acts of a three-act play. The abrupt ending, which arrives just before what should be the climax, comes off less as pregnant ambiguity than as cop-out, relieving the writer of the responsibility of taking a position and seeing the situation and characters through.

Nicely set by director Kimberly Senior in a finely rendered hipster café (kudos to designer Courtney O’Neill), the production is on a significantly higher level than the stiff, monotonous, going-nowhere script. Playwright Herzog introduces a broad range of characters—including Jamie’s Docksidered dad and chirpy mom (played by James Leaming and Jan Radcliff, respectively), his old babysitter (Margaret Kustermann) and a bulimic client (Halie Ecker)—but all are infected with a dysfunctional sameness that even the uniformly strong acting on display here cannot enliven. The catalog of woes is a long one, stretching from PTSD to addiction to dementia to eating disorders. By the end, “Great God Pan” feels like a browse through the psychiatric profession’s Diagnostic and Statistical Manual, without even the satisfaction of a diagnosis, let alone a cure.

Carl Jung once described neurosis as “a substitute for legitimate suffering.” The universe of “Pan” is one where characters luxuriate in their various hang-ups, perhaps because it frees them from the hassles of real relationship and ethical engagement—i.e., of growing up. Fixated on the past, terrified of change, they stumble along, grating on each others’ nerves while gazing ever more intently at their own navels. “The Great God Pan” captures the present moment all too well, but like its characters, it never pushes past the paralysis and denial that are conditions of our own time, into the painful but necessary truths that could conceivably set us free. (Hugh Iglarsh)