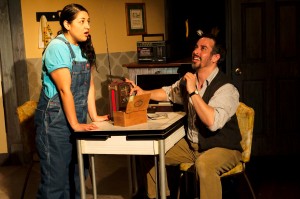 Artistic director Ann Filmer (who directs  “Pinkolandia”) and the 16th Street Theater stay in stride in this multilayered, culturally significant, fictional retelling of a refugee family from Chile assimilating into 1982 Wisconsin. At the heart of the story are twelve-year-old Beny (Maritza Cervantes) and her eight-year-old sister Gaby (Hannah Gomez). Beny has been in the states since she was three, when her parents Tomas (Carlos Diaz) and Camila Rodriguez (Stephanie Diaz) were forced to leave Chile after a military coup d’etat in 1973. There are several revealing story lines: an “uncle” (Miguel Nunez) comes back to the family, reigniting the revolutionary spirit; the children are having problems assimilating into the Wisconsin neighborhood; and the youngest daughter is repeatedly ignored to the point of a total withdrawal. In all, this is a play about estrangement and a family trying to forgive themselves and their countrymen in their past, while trying to cobble together a better future. But does this desire for a better life come at too much sacrifice and guilt?

Beny and Gaby have made a safe haven in their closet: “Closetland.” It is their imaginary place to go and enact the tethered pieces of remembrances and familial stories. The clever, eye-catching opening is heavily influenced by Beny’s reading of “The Diary of Anne Frank.” As this takes shape, Gaby comes into the closet to remind her sister of the rules: that they are supposed to play and imagine together. What we discover is that this in-between world of imagination and the small points of conflict that have been handed down to Beny make her into a small, angry version of her own revolutionary. She takes this out on those around her. She goes into class, where she is called names and ridiculed for her ethnic difference, and gives presentations on the obscenities of American foreign policy. At one point she runs through Hitler to Pinochet to Ronald Reagan.

Cervantes and Gomez have a strong stage presence, and Gomez’s childlike character Gaby is a delight to watch. She pulls it off. But on occasion the textures of the story seem too rich, too layered. And if the metaphor isn’t caught quickly, it could slide into an avant-garde piece. That was not the case on opening night, however. The stage was well crafted. The music was fun. This two-hour modern American tale walks many interesting paths, tells a wonderful story with passion and raises even more questions. (Mark Eleveld)