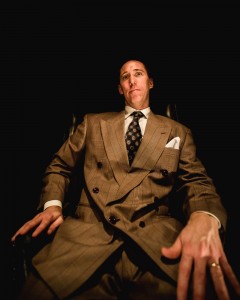 Hungarian-born playwright Ferenc Molnar loved this country enough to begin citizenship proceedings. But he had no love for capitalist deal-making; his sharp criticism of American business arrangements and human manipulation shines a light on questionable ethics through fast-paced humor.

The detailed Mr. Norrison (John Arthur Lewis) is set to join his family on a well-deserved mountain vacation. But his naïve charge, Lydia (Michelle M. Oliver), the daughter of Norrison’s wealthy and influential customer, announces that she is married and having a baby with Tony (Travis Delgado), a militant, communist cabdriver. In a flurry of wheeling and dealing, Norrison proceeds to transform everyman Tony into a titled captain of industry.

The ensemble brings the right energy to their broadly drawn characters; Lewis is smoothly corporate in his brokering and decision-making and Oliver endows her character with the sensual daffiness Lydia requires. The suitably ardent Delgado negotiates the transition between radical firebrand to titan of industry with confidence.

Certain casting decisions work better than others; Joan McGrath brings a fine comedic timing to the traditionally male role of nervous assistant Bartleby. But casting African-American Delgado brings race into distracting, anachronistic conflict with the piece’s 1929 class commentary. The show’s biggest flaw lies in director Max Truax’s choreography. The blocking fails to create the crisp chaos a door-slamming screwball comedy requires; pacing occasionally lags, while energy and intensity needs a boost. Molnar used that energy to comment on the amount of effort that goes into creating stable yet hypocritical American business façades. When the energy fails, so does the illusion, onstage and off. (Lisa Buscani)

At Oracle Theatre, 3809 North Broadway, publicaccesstheatre.org, Free. Through May 31.