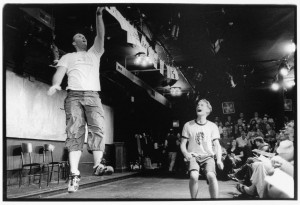 “What are the hallmarks of American culture that are also typical of ADD? The fast pace. The sound bite. The bottom line. Short takes, quick cuts … High stimulation. Restlessness … Speed. Present-centered, no future, no past.”
—Edward Hallowell and John Ratey, “Driven to Distraction”

At this point—after twenty-five unbroken years of performance in Chicago, of two generations of sell-out crowds, of untold thousands of two-minute sketches and hundreds of actor-writers, of spinoffs and Edinburgh Festivals and Hear ye-Hear ye civic proclamations—it is fair to say Greg Allen’s “Too Much Light Makes the Baby Go Blind” is more than an institution; it is a movement.

Allen and his cohorts have made their “neo-futurism” a hot commodity, spawning affiliated groups everywhere from San Francisco to Montreal, and developing into a perpetual motion theater machine, whose unique rituals of admission and spectatorship turn play-going into a kind of collaborative performance art. Neo-futurism is arguably the biggest, most durable entrant on the local scene since Second City began improvising fifty-some years ago. And like Second City, “Too Much Light” (hereafter TML) has created a precise and endlessly repeatable formula for achieving a tightly engineered spontaneity.

In different ways, each group offers theater aimed with calculated precision at a culture of instant obsolescence, of short attention spans and fidgety bottoms. Say what you will about a performance style built around two-minute blackout sketches, sight gags, clowning and spoken-word riffs—it is never stuffy, never slow. Offering the presence of live theater together with the quick and jagged pacing of the television commercial, the show sits well with a media-habituated audience, enticing them to return again and again to an experience that is both intricately repetitive and perpetually new.

Suitably enough for a show pitched primarily at a college-age demographic, the concept was first staged in the fall of 1984 at the raffish Harkness Nightclub at Oberlin College in Ohio, soon after Allen’s graduation. Working with fellow Oberlin alumnus Blair Thomas, who would go on to found Chicago’s Redmoon Theater and his own eponymous puppetry troupe, Allen and others staged a barebones, cabaret production of a series of long-forgotten brief plays. They were written by the early-twentieth-century artists—including Umberto Boccioni, Carlo Carrà, Luigi Russolo, Gino Severini, Giacomo Balla and ringleader Filippo Tommaso Marinetti—known as the Italian Futurists. Later, dubbing themselves the Automatons, Allen’s group performed the playlets in a quaintly modernistic robot style on the Oberlin quad.

It is tempting to say that the rest was history, but that’s not quite the case. It was only after a few years of “doing grunt jobs in Equity houses” and otherwise learning the ropes, according to Allen, that TML opened in Chicago, in the small Stage Left Theatre space at Clark near Belmont.

On that early December night in 1988, Allen and company introduced some of the distinguishing features of Neo-Futurist theater: the late-night starting time, making it accessible to working actors and bar-grazing students, and the chance-driven admission policy, charging theatergoers one dollar times the roll of a die (since risen to $9 plus the roll). Soon after, the troupe would add the audience-driven order of performance, whereby viewers are given a numbered menu of sketch titles and invited to scream out the number they wish to see next. 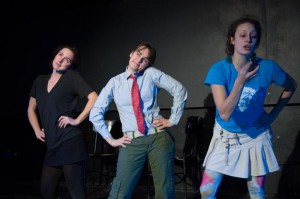 One may reasonably wonder why Italian Futurism—a movement firmly associated with some of the twentieth century’s less savory features—needed reviving. Guiding figure Marinetti, who would later become a charter member of Italy’s National Fascist Party, declared of Futurism’s aims: “We will glorify war—the world’s only hygiene—militarism, patriotism, the destructive gesture of freedom-bringers, beautiful ideas worth dying for, and scorn for woman.” In the salons known as serate futuriste, or “Futurist evenings,” the members would punctuate the poetry readings and art displays by yelling incendiary political phrases, in the hope of creating a ruckus, and thus regenerating a moribund, past-obsessed Italy. Balla was so enamored of the new machine age that he named his daughter Elica—i.e., “Propeller.”

“I liked the fiery rhetoric,” says North Shore native Allen of Marinetti’s 1909 Futurist Manifesto and the other outpourings of the artistic rebels. “It was a stick in the eye to everything that came before. It was a very clear rhetoric that wasn’t unhappy about starting riots.”

The Futurists weren’t seeking permanence so much as sensation and aliveness in a world of accelerating change, in which traditional humanism seemed fuddy-duddy.

“They anticipated their own demise,” says Allen—although in fact the group survived in one form or another until the end of World War II, when the impulse to worship strife and technology faltered in the wake of Auschwitz and Hiroshima. “There was a kind of planned obsolescence in the Futurist movement from the beginning. Certainly there were elements I was opposed to, like the love of violence and the misogyny, but I embrace what they accomplished. That’s what makes it Neo-Futurism.”

As Futurist visual art emphasized movement and action, so the group’s lesser-known theatrical wing put the accent on energy and pure emotion. Rebelling against nineteenth-century notions of rounded character and psychological depth, the Futurists proposed a kind of anti-theater, freeing the performer from the dusty conventions of bourgeois realism.

That freedom is reflected in the show’s title. It refers to a case study that Allen came across about an autistic child trying to explain why he smashed light bulbs. “It’s a long title with no real meaning,” he notes. “The title is an implied invitation”—a blank space for the audience to fill in.

The show’s note of gleefully edgy, almost-but-not-quite dysfunctional anarchy has found both a ready audience and a bottomless pool of performer-writers, who appreciate that TML is a decent paying gig in a theater scene where that is far from universal. Since its first sold-out performance in June 1989 at the seventy-eight-seat Stage Left, TML has had turn-away crowds innumerable times, with every packed house resulting in a take-out order for pizza, in another ritual of audience self-celebration.

When the show moved north in 1992 to the twice-as-large Neo-Futurarium at Ashland and Foster—a space memorably described by Hedy Weiss of the Sun-Times as “a dump over a [recently closed] funeral parlor”—the audience followed along, with many a show ending with a finely diced Konak pizza. As word spread about the new-old performance style, audiences also materialized in New York, San Francisco, Seattle, Colorado and even at a theater festival in Sibiu, Romania. (It was on that 1995 tour, among the pissoirs of Paris, that ensemble member Greg Kotis conceived the premise for “Urinetown,” his musical about a corporate plot to privatize the most basic of public functions, which would win two Tony Awards in 2002.)

Over the past twenty-five years, there have been myriad honors, tours and spinoffs, ranging from script publications to CD releases to feature films to an homage by NPR’s “This American Life” to a wide range of longer multimedia shows, processional and environmental productions, as well as more-or-less straightforward adaptations, by the prolific and protean Allen. These include a seven-hour production of Eugene O’Neill’s “Strange Interlude” at the Goodman Theatre in 2009, which resulted in both sustained, creative heckling and standing ovations. And what could be more TML than that? 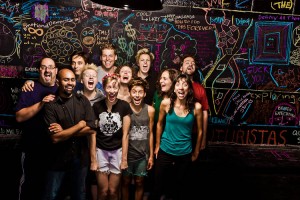 Through all of this, the flavor has remained the same. Adrian Danzig, an early cast member (also by way of Oberlin) describes the TML style as “non-representational” acting, abstract in the manner of modernist painting. “You’re not pretending,” says Danzig. “You’re playing yourself, being yourself, knowing why you’re doing what you’re doing and expressing that reason on stage. The experience here is not so much about being an actor as a theater-maker, who is not a celebrity but an equal to the audience, always responding to their response.” Adds Allen: “This isn’t escapist theater. We try to be as smart as we can.”

Hundreds of cast members have undergone the TML process over the years, creating and presenting at least two new sketch ideas each week, debating the merits of others’ ideas and preparing the final product, which is never played the same way twice. It’s an hour-long high-wire act performed three times a week without the net of formal script or direction. It’s not for everyone. “We’re looking for fully rounded individuals who can express themselves theatrically and spontaneously,” says Allen. “A lot of things can go wrong—we embrace the wrong, because it’s part of that oscillation between prepared and unprepared, which is what defines real.”

TML gives this quest for authenticity a postmodern twist by theatricalizing every aspect of the experience, from dice-rolling admission to pizza-chomping exit. Some of the sketches are topical and political in nature, mirroring the creators’ left-of-center stance. But all are fast and evanescent, merging into one another and creating a pauseless blur of language and activity that fills both stage and seats, softening the distinction between performer and spectator.

“In conventional theater, the audience members quiet their body and needs, and focus on the stage—they believe it’s more important than they are,” says Danzig. “Neo-Futurism gives the lie to that—we play a different game.” Allen notes that “Reality TV is an attempt to do theater on TV—people want actual experience.”

Which raises the question: Is TML an attempt to do reality TV on stage? There’s no doubt it’s attuned to today’s social media world, in which everyone is the star of their own selfie universe.

“The show predates blogging,” says co-artistic director Bilal Dardai. “But like blogs, it’s an art that represents one’s own experience. When theater is at its best, it functions like a conversation.”

But theater historically also functions as a mirror of nature, a way of understanding society better by viewing it from the outside and stepping away from the purely personal. The TML phenomenon, with its rejection of thought-through content in favor of fragmented and private experience, seems less about examining our engulfing media environment than about reenacting it in a playfully hip way. Inviting the audience to participate marginally in creating a high-speed spectacle does not alter the fact that it is a spectacle, a way to spice up the ambient alienation rather than to question it.

The original Italian Futurists were an avant-garde of sensation and attitude, seeking not to humanize society through culture, but instead to make culture absorb and reflect the dehumanizing forces of an industrial and militarized era. To some extent, the Neo-Futurists seem to play a similar role in our own time, creating an aesthetic of disposable fun that serves to accommodate viewers to the frenetic, self-absorbed emptiness of the information age.

TML continues to attract college students and others looking for something that’s always superficially different yet always fundamentally the same, which defines the media situation. The company’s longevity is tribute to its skill in merging edginess with conformity. Neo-futurism is a dramatic form designed, in classic postmodern fashion, to neutralize its own messages. It aspires to liberate its audience without actually challenging it, turning its own rebellious impulses into a carnival of sensory overload that, like the mass media, defeats any attempt at consciousness.

“Too Much Light Makes the Baby Go Blind” runs every Friday, Saturday and Sunday night at the Neo-Futurarium, 5153 North Ashland, neofuturists.org/toomuchlight. $10-$15.

While I appreciate the Italian history, I disagree with the majority of this article. “The TML phenomenon, with its rejection of thought-through content in favor of fragmented and private experience, seems less about examining our engulfing media environment than about reenacting it in a playfully hip way.” – That’s a tad bit extreme. They reject thought-through content? They have a voting session (I believe on Tuesdays) for plays that will be added to the menu as each Neo-Futurist presents their idea. It has to be a unanimous vote. They’ve discussed rewriting/developing ideas and bringing it back for a vote weeks… Read more »