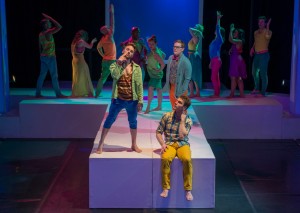 Flashing lights, club music, alcoholic beverages, a coat rack, wristbands and people mingling seem more like traits of a party than a play. However, this is what audience members walk into at House Theatre’s production of “Dorian.” Needless to say, once the show officially begins, the party just keeps rolling and the audience is taken on an avant-garde theatrical journey.

“Dorian,” is a new adaptation of Oscar Wilde’s “The Picture of Dorian Gray” from playwrights (and House Theatre company members) Ben Lobpries and Tommy Rapley (Rapley also serves as director and choreographer). Like the novel, the play tells the story of a man who desperately wants to hold onto his youth at any cost and magically receives his wish.

Though the show’s story can be quite dark, there is a great mix of comedy and drama in the script, which is fantastically brought to life by Patrick Andrews (as Basil, a tortured artist and love interest of Dorian), Kelley Abell (as Sybil, a performance artist and another of Dorian’s love interests), Manny Buckley (art critic extraordinaire), Ally Carey (Sybil’s daughter, Isabelle), Lauren Pizzi (a socialite in the art world), Alex Weisman (as Alan, a man infatuated with Dorian) and Cole Simon (as the titular Dorian). Dance and movement are just as important as the dialogue and comedic punch lines are hit just as cleverly as Dorian’s blades cut skin and echo his destruction.

While some liberties are taken to modernize the story, the overall themes from the book, such as aestheticism and the true cost of youth and beauty, as well as such motifs as the use of the color white, carry over to the stage with imaginative execution. For example, large white moveable blocks are a main component of Collette Pollard’s scenic design. The blocks allow the space to transform into various minimalistic smaller-scale settings, from tables in a restaurant to part of a catwalk.

The show is set in promenade style, meaning there is limited house seating and the audience is invited to walk about the set with the actors from scene to scene and experience every party, gallery opening and intimate scene shared from the point of view of the actors. However, when the set’s blocks aren’t being used in a scene, patrons can also generally use them as seats. The successful implementation of this style is also a credit to the talent of the entire cast and crew. From time to time the ensemble (Ben Burke, Ally Carey, Bryan Conner, Blake McKay, Monica Thomas and Donnell Williams) directs the audience where to move for safety or a better view, but it rarely takes the audience out of the show. Likewise, with the amount of movement that takes place throughout the performance—by actors and audience members alike—time passes quickly and two hours of theater seem to pass in mere moments.

Whether you enjoy “sloppy seconds” or “double penetration” (the adult drinks of choice at the show’s bar), this brilliant and boldly modern variation of a classic story that explores the lines between self-image and self-destruction is one that Wilde would likely take pride in. (Mary Kroeck)