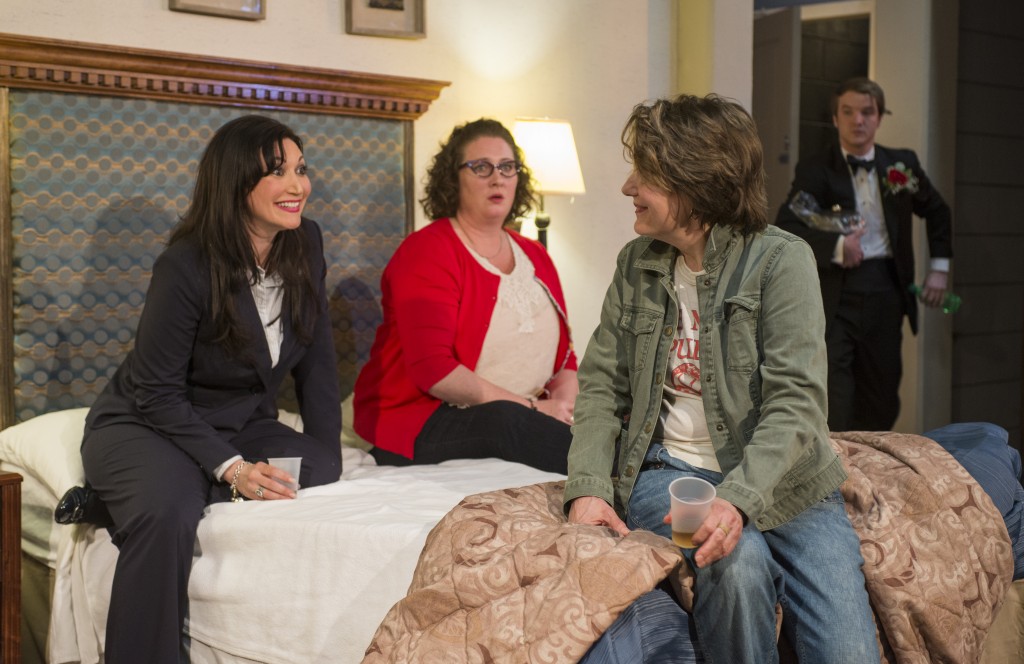 Images from the early days of mass airline travel, the “Mad Men” years, depict the life of a flight attendant (then called stewardesses) as one of high-flying youth and beauty, of casual romance and carefree partying. But the passing years brought on anti-discrimination laws that prevented the airlines from their early practices of hiring and firing based on age and looks and so, today, many of our flight attendants resemble their employers: aging and tired.

It is this world, that of today’s flight attendants facing early retirement, absentee parenting and a generally groundless life, that playwright Marisa Wegrzyn takes on with her witty and wistful new play, “Mud Blue Sky,” being given its Chicago premiere at A Red Orchid Theatre. Beth (played with a resigned demeanor that permeates her physical presence by Natalie West) checks into an airport hotel near O’Hare and seems to want nothing to do with the partying planned by the slightly younger Sam (played with sparkling energy by Mierka Girten). Turns out she has her own plan that involves buying pot to soothe her aching back from a high-school-age pusher who takes a break from his prom night to sell her a quarter ounce (Matt Farabee, holding up against this den of cougars who see him variously as an object of lust and longing and mothering). Before long, they’re all in Beth’s room, joined by Angie (the effervescent Kirsten Fitzgerald), a former co-worker who’s been jettisoned from her job for weight issues, and is adrift in the suburbs of Chicago.

Though much less happens than the setup might foretell, “Mud Blue Sky” manages to carry on a poignant conversation about careers and aging, about finding one’s place in the world. Director Shade Murray keeps things cracking in eighty-five uninterrupted minutes, with occasional bits of unfortunate blocking that are likely more a reflection of the challenges of AROT’s minuscule space than his directing. Speaking of spatial challenges, Jacqueline Penrod’s set design manages to depict a seemingly spacious hotel room past its prime (like our protagonists) and still have room for an outdoor smoking spot. This is a production with all the melancholy of a long layover at O’Hare, but with amusing fellow travelers you actually want to spend some time with. (Brian Hieggelke)