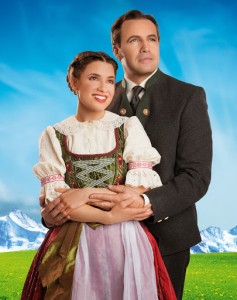 In her autobiography, “The Story of the Trapp Family Singers,” Maria von Trapp wrote of her confusion when the Mother Abbess of Nonnberg Abbey encouraged her to forsake her aspirations to the sisterhood in favor of answering God’s will: “I really and truly was not in love. I liked him but didn’t love him. However, I loved the children, so in a way I really married the children. I learned to love him more than I have ever loved before or after.” It was with this creation of a family that the wheels were set in motion for the careers of The Trapp Family Singers, the 1959 musical, “The Sound of Music” (the final collaboration of Richard Rodgers and Oscar Hammerstein II), and the 1965 film starring a practically perfect Julie Andrews. The aerial footage of Andrews spinning around on the top of the Tyrolean Alps outside Salzburg, palms opened upward in both supplication and celebration, and then that brilliant Rodgers score swirling and rising until hearts are so full that there isn’t another choice except voice, except song, has leapt into America’s collective conscious for the past half century.

Lyric Opera of Chicago hopes to send that gift twirling toward the next generation with their new production. Last year Lyric launched their American Musical Theater Initiative with “Oklahoma”; critics mostly raved, houses were sold out, extra performances were added. “The Sound of Music” is primed to repeat this success, given that the casting list includes a movie star, a television star, a Broadway diva and some Chicago-based leading ladies of the Joseph Jefferson Award-winning category. And not so surprisingly, nearly all of the stars of the production have one or more Chicago connections.

If there is a headliner in this romp, it would be Billy Zane as the zipped-up, guitar-strumming Captain von Trapp. Even though a successful film career has taken him all over the world, Zane grew up in Chicago. “There’s no more indelible horizon than Lake Michigan. I grew up basically on Ardmore and Sheridan overlooking that lake from the fourth floor, right off aptly named Hollywood Beach,” Zane revealed to a number of Chicago-area reporters during a telephone interview. Zane remembered fondly his time at Evanston’s Harand Camp of the Theatre Arts, where he acquired “the foundation of an appreciation of the American songbook.”

When we asked about Zane’s preparation for his portrayal of Captain von Trapp, he had some interesting responses. Queried about potential resonances as a new father, Zane revealed, “I’ve always felt hot-wired for fatherhood. I’d always looked forward to it. I’m a bit of a late bloomer. There’s an undeniable understanding once entering the fraternity that will permeate most choices and expressions onstage.” 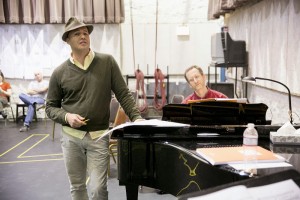 Regarding pre-production research, Zane said, “I’ve done none, and didn’t really intend to.” But our questioning may have caused a change of heart. “What serves me as an artist is I come in as open as possible with an ear trained to pull inspiration and information from the most likely and unlikely places and, although I must say I’m grateful for your question, maybe I’ve been too casual with that because it has served me, and this could…be an opportunity to reach into history and the facts and I will humbly acknowledge that this may be the flashpoint of that research.”

The wealthy and sophisticated Elsa Schraeder (Captain von Trapp’s would-be fiancée) is Chicago-favorite Elizabeth Futral. Beautiful and winsome, Futral stopped by the Lyric’s Ryan Center training ground from 1989 to 1991 on her way to an international operatic career. She returns to sing at Lyric regularly, and Chicago has had the pleasure of watching Futral add to her stunning coloratura repertoire by stepping into roles that tread that heady ground between opera and musical theater, such as her recent Desiree at Houston Grand Opera.

In Maria’s court is the Mother Abbess, who challenges Maria to follow her heart. Lyric was lucky to snare Grammy Award-winning American soprano Christine Brewer for a role that calls for true Brünnhilde-pipes. When not wowing the operatic world with her performances in Wagner, Beethoven and Strauss, Brewer and her husband continue the unending love-task of refurbishing their 1874 home near the historic district in Lebanon, Illinois.

Leading lady Jenn Gambatese’s Broadway background includes creating the role of Natalie in “All Shook Up” opposite Cheyenne Jackson and recently starring as Glinda in the first national touring production of “Wicked.” But she spent a lot of time earlier in her career in sit-down productions right here in Chicago, so she’s family, too. Part of the new breed of singers who can belt with the best and then pop out the legit top notes with ease, Gambatese is sure to bring her champagne enthusiasm and personal warmth to the character of a young woman forced to come fully of age in an instant.

But who’s going to figure out, and then neatly solve, Maria’s problems? That would be Sisters Margaretta (Cory Goodrich), Berthe (Susan Moniz) and Sophia (Erin Elizabeth Smith). And we’ll also have the Frau Schmidt of Mary Ernster. Some members of this artistic melting-pot “Sound of Music” family live and create right here. The rest have flown home for the spring thaw.