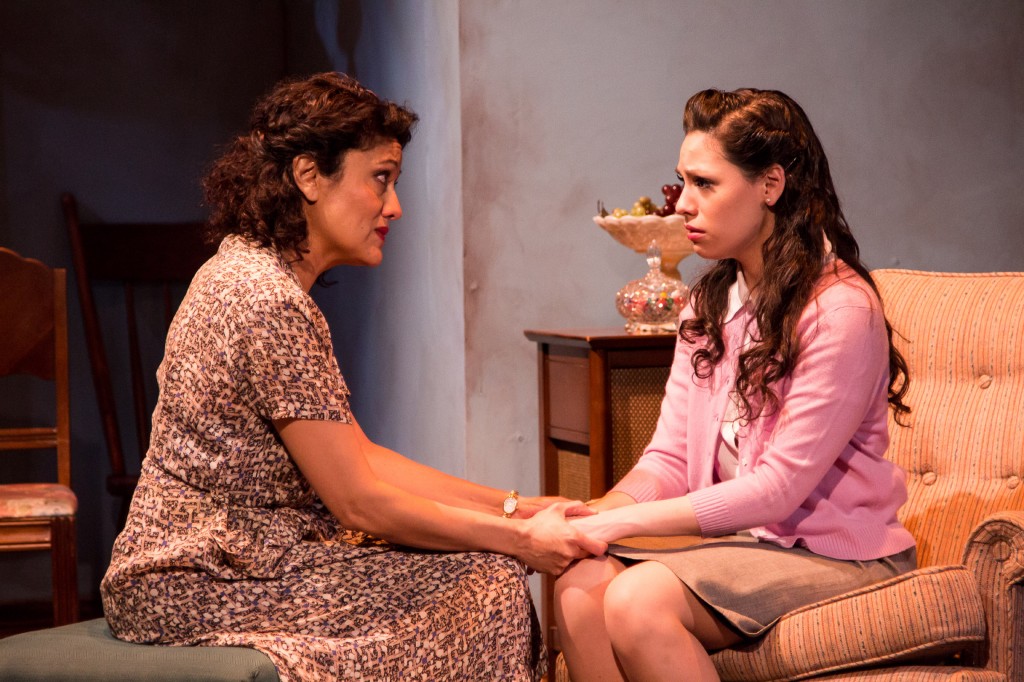 From the very beginning of Arthur Miller’s “A View from the Bridge, ” you know there’s a train coming, but you can’t get off the track. All you can do is watch as the train moves closer and closer until the headlights blind you. Perhaps, in this case, it’s more appropriate to imagine the Titanic heading toward that fatal iceberg.

Set in the 1950s in Red Hook, a New York neighborhood near the Brooklyn Bridge, the play follows hard-working longshoreman Eddie Carbone (Ramón Carmín) and his wife Beatrice (Sandra Marquez) and their differing opinions on how to let their niece Catherine (Ayssette Munoz) come into her womanhood. At seventeen, Catherine wants to work and has been taking classes in the hopes of becoming a secretary. Eddie is extremely protective of Catherine. While his care for her seems to come from a good-hearted place, it becomes clear that his emotions are a bit mixed up when he begins to project his feelings onto those around him, especially on his immigrant relatives Marco (Eddie Diaz) and Rodolpho (Tommy Vega-Rivera), who has taken a romantic interest in Catherine.

This Teatro Vista cast comes across as genuine and honest, bringing to life the true humanity of these characters and making every minute of the show feel as if you might be watching a home movie rather than a play. The intimacy of the Richard Christiansen Theater in the Biograph at Victory Gardens furthers this notion, as no one in the audience is too far away from the action to miss even the most minute details, such as the way Munoz’s Catherine changes her shoes from high heels to flats, depending on who she’s around, to express her womanhood.

Though there aren’t many surprises in the script or this production’s interpretation of it, Ricardo Gutierrez’s direction does exactly what Miller intended, mimicking elements of Greek theater and holding a mirror up to the audience, forcing us to question what we might do if we were in the same positions. Those questions never have easy answers. And that’s why productions like this continue to exist: to remind us all that humanity is complex, there isn’t always clarity in justice or what’s considered to be success, and dreams are only as real as you create them to be. (Mary Kroeck)