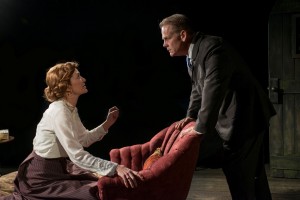 Having spent time in the mid-1880s dipped in some sort of madness reminiscent of Lewis Carroll’s Hatter, August Strindberg dug himself out of his personal rabbit hole and continued to fill the robust portfolio of theatrical works which made him one of the most prolific playwrights of his time. In 1900 he penned “The Dance of Death,” originally a two-parter, later reduced to an exploration of the first half alone. This later version is now enjoying a turn at Writers Theatre’s space in Books on Vernon in Glencoe. The tiny room at the back of the bookstore would surely have pleased Strindberg as a performance space as he founded the Intimate Theatre in Stockholm in 1907, specifying many rules for the manner in which the space would be used, among them that the stage was to be unusually small, with a minimal number of seats, assisting in—and insisting on—giving the audience a greater connection to the work. This bookstore’s back-room theater has fifty seats; a playing space so intimate that, in this instance, coal piled in a bucket near the stove on set can be smelt by every audience member. There is no chance for distance, either for the spectators or the players.

In keeping with the expected production values of Writers Theatre, the directors, designers and actors are topnotch. But the star of the production is playwright Conor McPherson, whose adaptation is given its American premiere here. In keeping with Strindberg’s drive to grab his audience and shake them about, McPherson uses contemporary colloquial language in sharp contrast to the Victorian jailhouse setting. Perhaps most telling, the character of the wife is given far more license to be an equal partner in the lies and carefully staged humiliations that drives this precursor to Albee’s ”Who’s Afraid of Virginia Woolf?” Whereas originally Alice may have been drawn as a victim, more in keeping with the plight of the 1900 wife, in this bloody triangle she is every inch the self-assured virago, ratcheting up the tension and leveling the playing field between the sexes. Despite Strindberg’s traditional expectations of his own wives, it is clear from his writing that he understood the treatment of the women of his time to be unfair. McPherson places on the stage the equal woman that Strindberg could not live with in fact.

Larry Yando’s Edgar, either dying or brilliantly playing at dying, slipping into dementia and/or madness, enjoys every moment of torture this brings to his wife Alice (Shannon Cochran). Equally skilled at both the smiling and the damp-eyed lie, Cochran’s Alice waits breathlessly for the complete freedom that will be hers once Edgar exits, whether it be natural or from the banana peel slipped beneath his boots. When Alice’s malleable cousin Kurt (Raymond Chapman) arrives, Edgar and Alice join forces as cats batting at a mouse, and they resolve to remake him into a facsimile of their miserable, irascible selves. Kurt initially falls for their game, but for how long? Making his Writers Theatre directing debut, Henry Wishcamper creates the choreography for the trio’s dance of death. (Aaron Hunt)