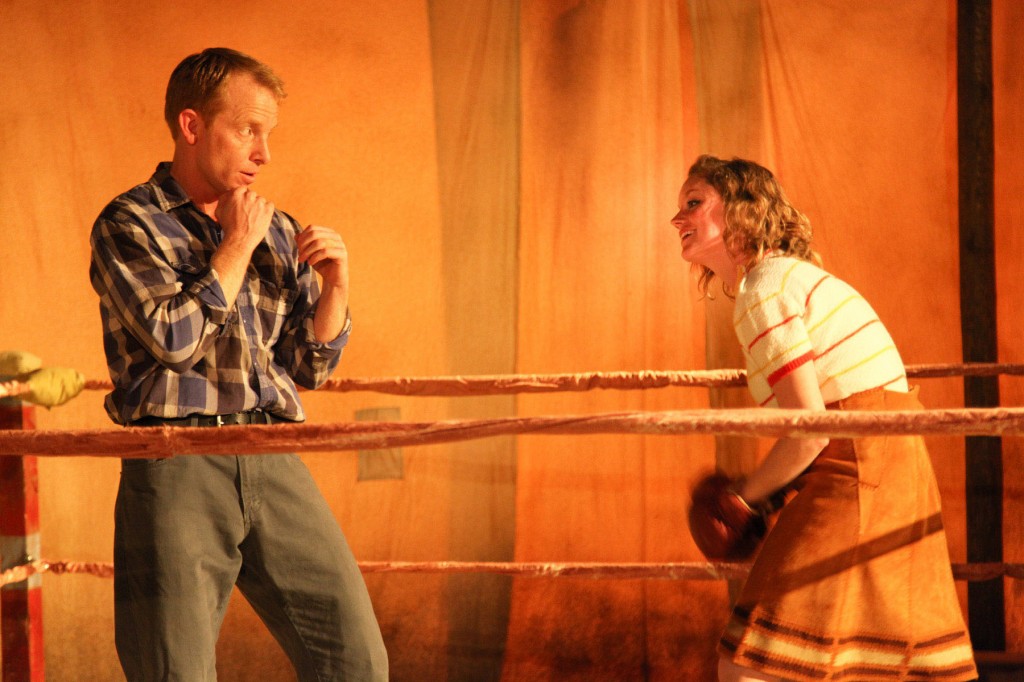 We’re not too far into “Lay Me Down Softly” before we learn that the carnival where the play takes place isn’t the sort of traveling sideshow that features freaks; if there were any freaks, they’d probably steal the show as I suspect a coterie of select circus-type oddities would be a better draw than the cast of characters Billy Roche’s script provides.

The story focuses on the main attraction of Delaney’s Traveling Roadshow: the boxing ring. None of the boxing or other fighting is shown on stage; the altercations take place offstage and the boxing is hinted at by a darkened ring, flashes of lighting, and the lingering after effects on the carnival’s pugilists. At first the center of attention is Dean (Matthew Isler)—a belligerent, disrespectful boxer who thinks he’s a real cutup. Instead, those around him—his enablers, let’s say—seem to find him a right bore and even a threat to themselves and to the roadshow. They merely tolerate his taunts and his violent antics because as boxer he’s a big part of whatever money their sideshow manages to bring in.

But once some of his anti-social behavior comes back to bite him in the boxers (a professional fighter shows up to grant this amateur a lesson in humility as revenge for an offstage beating visited upon one of the pro’s relatives), Dean quickly gets dispatched from the spotlight. As quickly, the other characters are done coddling this manchild. Stepping into his place as “savior” for Delaney’s is handyman Junior (Dan Waller)—a better boxer by all rights, one who has even fought the pro before, but one whose career was stillborn due to an ailing Achilles tendon. Though Junior staves off the pro and manages a draw in their first meeting, the declining state of his bad foot is a guarantee that soon he’ll fall and with him the fate of the roadshow, which rests clearly on his shoulders, or his heel.

Amidst these developments, a romance buds between Junior and the long-abandoned daughter (Jamie L. Young) of the roadshow’s gruff owner Theo (Jeff Christian). There is an unspoken hint that though Theo is patron of the road show, the paternity for lovely young Emer may indeed rest with Theo’s trusted cut man Peadar (Michael Grant). Much of the dialogue is intently snappy, the frequent monologuing is at times florid, the set design is evocative of a rundown roadshow on its last legs, and the cast is able. But there’s a listlessness or inertia in director Kevin Christopher Fox’s telling of these hapless lives that left me unengaged. Some theatrical spark is missing from this Seanachai production and I can’t quite pin it down. ‘Twas like watching a boxing match from some distant place and strangely not caring who wins. (Raymond Rehayem)