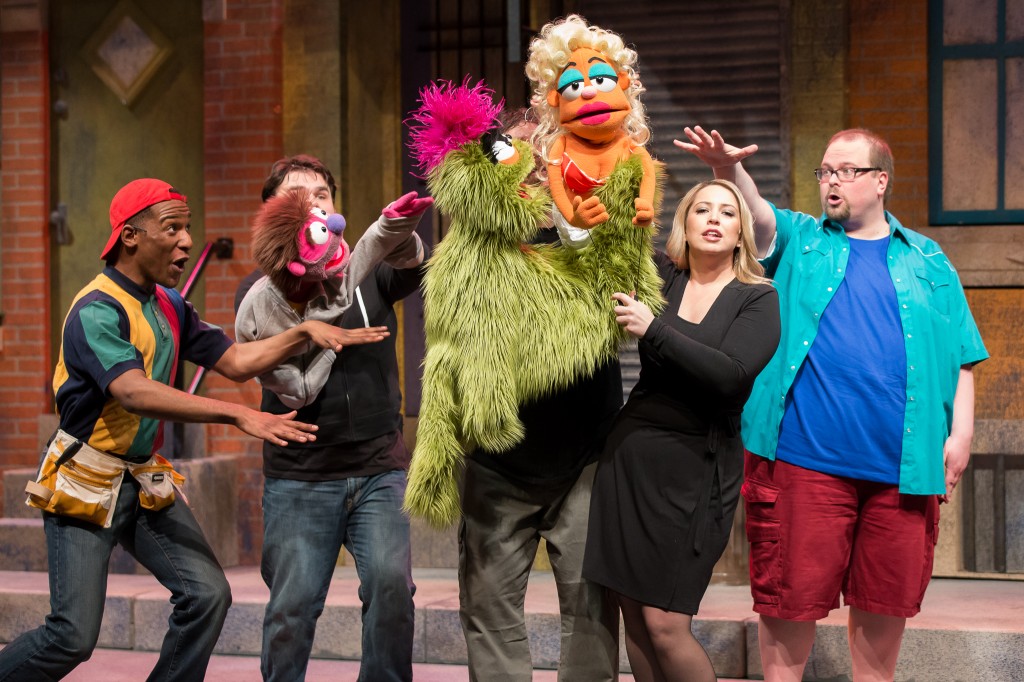 “Avenue Q, ” originally conceived as a television series, developed as a stage production in 2002, moved Off-Broadway and then to Broadway in 2003, and garnered three Tony Awards. The fresh production running at the Mercury Theater continues to teach the coming-of-age lessons, delivered with the gentle distance provided by our puppet friends, manipulated by unconcealed actors, interacting with other actors. Baby Boomer parents coddled their little Generation X-ers into believing that they were unique, “special,” and that the world was their oyster. Learning to experience the real world without the aid of those parental, rose-colored glasses, our lovable protagonists take their B.A.s in English, and sing and shuffle-ball-change their way into an understanding of purpose, relationship negotiation, fiscal responsibility, homosexuality, racism, drinking, porn (and its engine, The Internet), sex and Schadenfreude.

Eugene Dizon turns in another fine performance as conductor/musical director; the vocals are clean and natural, the diction clear, and the five-piece band sounds like a full pit. Kevin Bellie’s choreography delights with just the right amount of Junior High School Show Choir chutzpah. Alan Donahue’s set sports a temperate color palette that highlights the hues of Rachel Boylan’s costumes, seeming carefully coordinated while also appearing to be joyous discoveries from The Brown Elephant.

Jackson Evans, Leah Morrow and Adam Fane shine as the puppet-people with the most vigorous character arcs; Evans’ Princeton and Morrow’s Kate Monster forge a relationship that crosses “racial” lines and Fane’s Rod struggles to overcome his self-hatred and own his sexuality. Christine Bunuan’s Christmas Eve and Sean Patrick Fawcett’s Brian own that their life “sucks” and then find the self-reliance to change and grow. Donterrio Johnson’s Gary Coleman (yes THAT Gary Coleman) is a Peter Pan-cum-landlord who builds his character with soul, wit and a pelvis that cannot possibly be connected to his spine. Stephanie Herman pushes up Lucy’s big puppet boobs and turns in a Madeline Kahn that will force your smile even while you grimace. Daniel Smeriglio and Thom Van Ermen round out the group, playing friends and bears and monsters and lovers, oh my.

But the seamless theatrical calm underlying the fun-fun-fun of this production is provided by the guidance of director L. Walter Stearns; the connectivity established rushes like electricity around the stage, and zaps its way right into the heart of the audience. (Aaron Hunt)