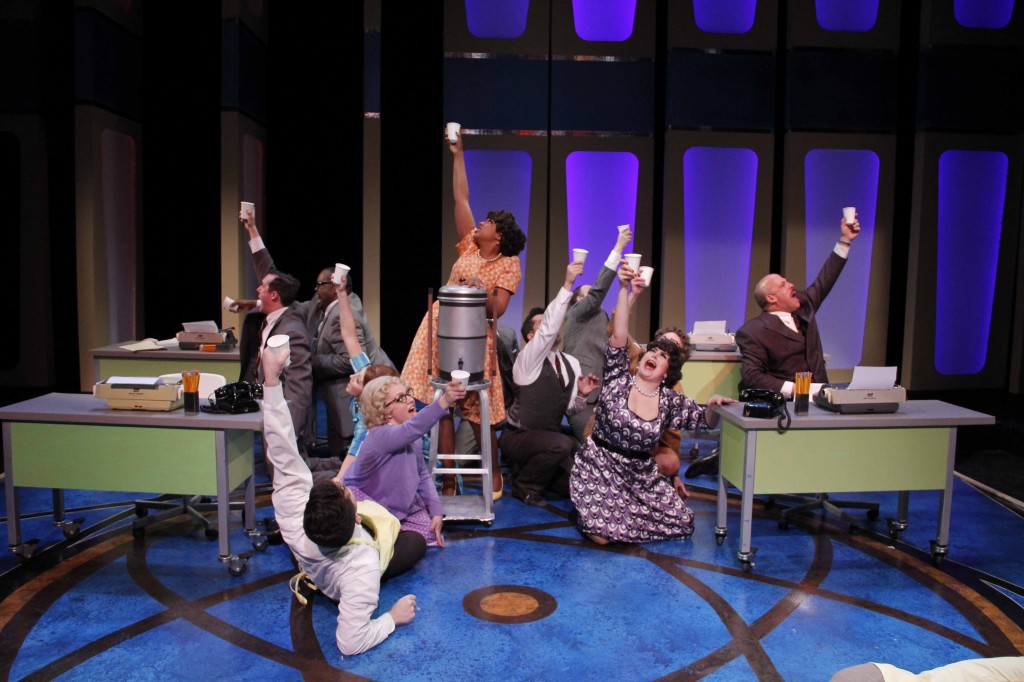 Seven Tony Awards and a Pulitzer Prize for Drama celebrated the first production of this Frank Loesser-musicalized story about an ambitious young man who stumbles upon a book with the same title and, using its precepts, schemes and scams his way to the top, not actually doing anything that might be considered “work.”

But what possessed managing artistic director Michael Weber and his Porchlight crew to think that a revisit of a 1960s musical about ruthlessly clawing up the big-business ladder at a time when everyone smoked (everywhere), adultery was business-as-usual (for men), and a woman’s biggest dream was to get married so she could stay home and keep her man’s dinner warm was a good idea?

But while the wildly popular television series examines the dark underpinnings of American society and culture of the 1960s, Porchlight’s production keeps it light. As director Rob Lindley tells us in his notes, “This…is satire written by some of the most brilliant comedy minds of their generation, maybe of any. …I’ve approached this production wanting to honor it, stay out of its way, infuse it with some passion, and remember that it is not a serious show.”

Lindley and colleagues meet that promise. Choreographer Brenda Didier’s dances undulate like the mysterious shapes inside a lava lamp, and costumer Bill Morey provides the polka dots, big hair-bows, and microscopic jacket lapels. Jeffrey D. Kmiec’s twirling, brightly lit flats could be the background of the set of “The Dating Game.” Music director Kory Danielson handles his pit with aplomb, and assists his singers in adhering to the multiple stylings of the score.

Elizabeth Telford, with her upturned nose and a mezzo-soprano with a lovely bloom at the top, is reminiscent of a young Mary Tyler Moore. Sarah Hayes takes a tiny role and, with a twist of her spine and a limp cig hanging out of the corner of her mouth, recalls Carol Burnett’s mop lady. John Keating’s Bud Frump is all scrumptious malice, and if Tyler Ravelson’s Finch hides his soft center a little too close to the chest, he otherwise buzzes with delight, and trumpets his songs with an exciting tenor. But veteran Iris Lieberman outshines them all. She so underplays her senior secretary Miss Jones that, when she lets down her hair and provides both the vocal and the toe-tapping obbligato for “Brotherhood of Man,” the show leaps off the dais and onto the audience’s laps. (Aaron Hunt)