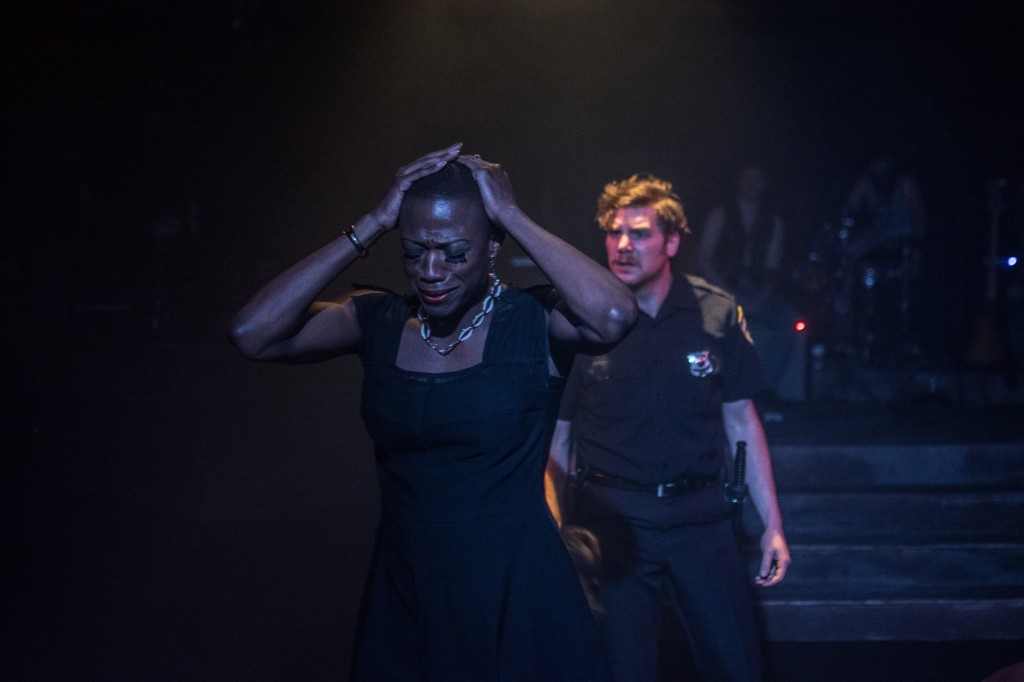 A historical reenactment “is an educational or entertainment activity in which people follow a plan to recreate aspects of a historical event or period.” Critics of previous mountings of this production (at the Steppenwolf Garage and New York’s Barrow Street Theatre) have called attention to its performance art quality. As entertainments once called “musicals” are now considered “operas, ” performance art is becoming theater, in order to find a new and younger audience. Certainly a reenactment can place the audience member in a space to feel as if they were there, whereas a play might provide only a window through the fourth wall.

And that is what “Hit the Wall”—produced here by Chicago Commercial Collective with most of The Inconvenience company’s cast still intact—is all about. Because it isn’t properly a play. It is a historical reenactment that allows an audience—perhaps a younger audience who wants a greater connection to the past—to be emotionally in the heart-space of ten characters who, in playwright Ike Holter and director Eric Hoff’s production, find themselves taken up into the swirl of the early morning hours of June 28, 1969 when a standard police raid of a gay bar begins to turn the rusty wheels of justice; those who had been pushed to the fringe found the group-strength to fight. Not to simply watch the status quo, but to take back the neighborhood that they had built, the homes and the families that they had cobbled together under the radar of a misinformed, easily manipulated majority. Long considered the first volley in the gay civil rights movement, this is a night that will burn in the memory of those who lived as adults in that time, some who were there physically, and all who were there spiritually.

We follow Hoff’s ten characters and three-man rock band through that evening. In ninety minutes it isn’t possible to give them all fully fleshed-out characters, nor does the show make that attempt. But we listen to the rage and the hurt, the yelling is in our faces, the crying buried into our shoulders. We see the garbage over-turned, and listen to the electric guitars scream as police batons crack down on helpless limbs. And we live it. We are there. Our collective guts spill with the beaten, and we breathe a new breath with the survivors. (Aaron Hunt)