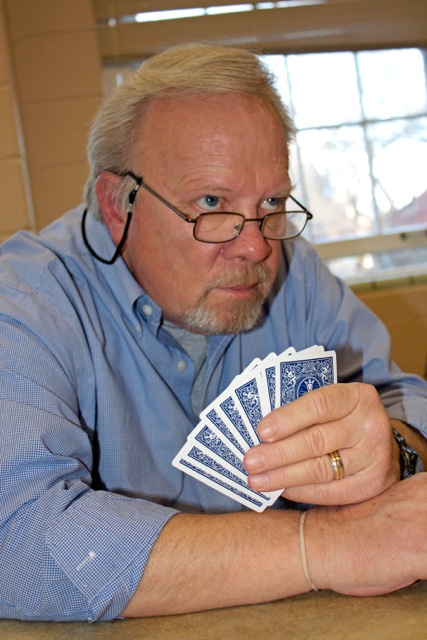 Like the 1981 movie starring married couple Jessica Tandy and Hume Cronyn, Rebekah Theatre Project’s production of playwright D. L. Coburn’s first play also stars a husband-and-wife team, Paul and Patricia Tinsley, as Weller and Fonsia. As nursing-home residents disconnected from family and friends, the two strike up an acquaintance while Weller teaches Fonsia to play gin rummy. The relationship travels the expected paths back and forth between connection and disconnection as Fonsia quickly shows herself to be the luckier (or is it the more savvy?) gin rummy player, causing Weller to lose confidence and status within the confines of their growing bond. The pair slowly gets to know each other’s secrets, and hilarity ensues.

Except it doesn’t, actually. The funny jabs that cause the belly laughs are gradually revealed as polished tools carefully honed by two curmudgeons who have learned, both aggressively and passive-aggressively, to end up on top of every life-game they have encountered. And this ongoing gin rummy-championship can have only one winner. Director James Sparling takes a very different tack with the ebb and flow of the relationship than did the first director Kip Niven, and the dialogue is played more matter-of-fact than with hidden meanings. This causes the arc of both the characters and of the play itself to be revealed more quickly than Coburn might have desired, pats down the laughter much sooner in the evening, and makes for an expectedly singular exploration of this 1978 Pulitzer Prize winner for drama and Best Play Tony Award winner.

Tinsley and Tinsley appear very relaxed onstage with each other. On the night I saw the play there were several botched dialogue cues that were carefully covered by one or the other of the couple. Mr. Tinsley fared the better of the two in creating Weller, perhaps because of the complexity of the role of Fonsia, which may only be fully realized by sticking to the original fight-plan of the production. (Aaron Hunt)