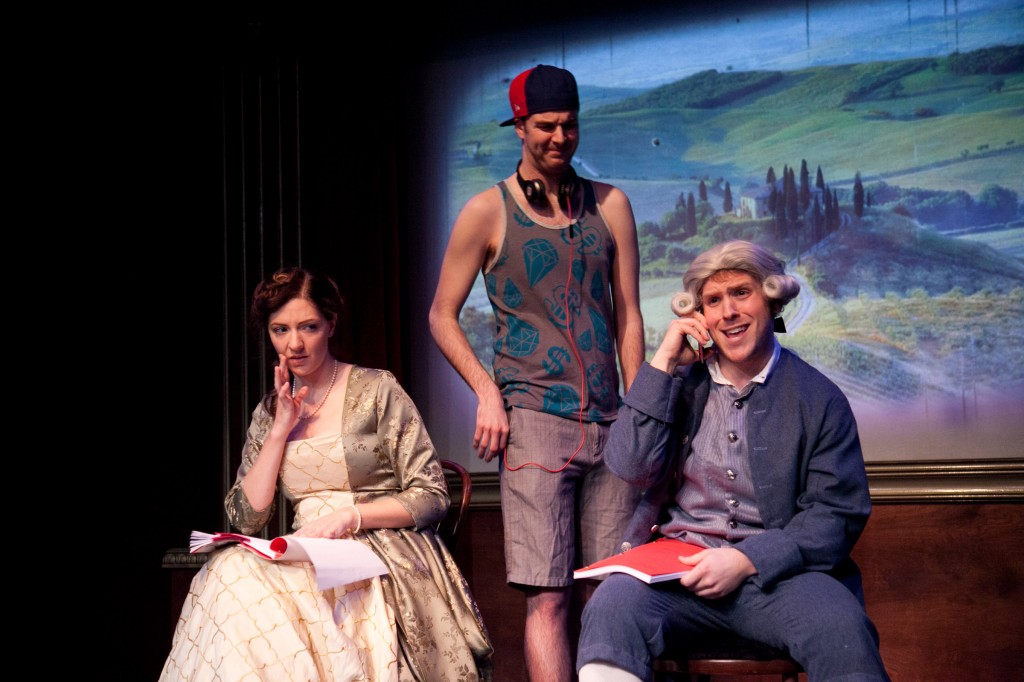 The eternal story of love grasped for and lost, lost forever or regained resounds all the way back to Eve and that snake’s apple, and goes down easiest with musical accompaniment. Is it a sin to usher in a Chicago-type spring with a formulaic world-premiere sing-fest that causes us to find ourselves hoping that the evening will end in a major key, and propel us humming out the door into leftover April showers and a middling of promised May blossoms? Perhaps in an attempt to find out, Signal Ensemble Theatre closes its eleventh season with the boy-meets-girl original musical “The Next Thing.”

Signal’s offering, with a book penned by co-artistic director Ronan Marra, has as its central conceit that our could-be lovers are warring movie stars, continually paired together because of the wild success of their first celluloid coupling. American film star Conor (played by Christopher Selefski) and British film star Kate (Courtney Jones) charm the paying public while fighting behind the scenes due to a disparity of styles and personalities, and a shared unwillingness to let down walls. Sam, their director—(the always energetic Joseph Stearns)—keeps tossing back the grain beverages, longing to create art that will soothe his soul, instead of the cash-cow scripts brought to him by self-absorbed producer Laura Golden (Eleanor Katz).

Mix in a dash of mentors, a sprinkle of bimbos and a splash of paparazzi, stir (because shaking might bruise this oh-so-light froth), and all we need to complete this cocktail are the tunes which Jon Steinhagen’s score provides. Choreographer Brigitte Ditmars invests the numbers with the right amount of movement for the music and the size of the performance space.

But we focus, quite naturally, on the will-they-or-won’t-they potential lovebirds. Cast against physical type (Selefski isn’t tall and dark and Jones looks nothing like Kate Winslet), their chemistry is right. Jones is possessed of a lush singing voice, and under Marra’s direction keeps her Kate both sufficiently reserved and big-hearted. And Selefski is nothing less than magical, beginning as a would-be rapper and continuing as a new-moneyed snob, all the while hiding the soft, scared boy underneath. Not a singer according to the script, Selefski keeps his bubbling tenor under wraps, speak-singing his musical moments until the final duet that will decide everything.

If spring is really the unofficial best time to fall in love, don’t finger-wag at Signal for neglecting to produce another grit-encrusted, reality-stuffed Chicago play; grab a hankie and go. (Aaron Hunt)