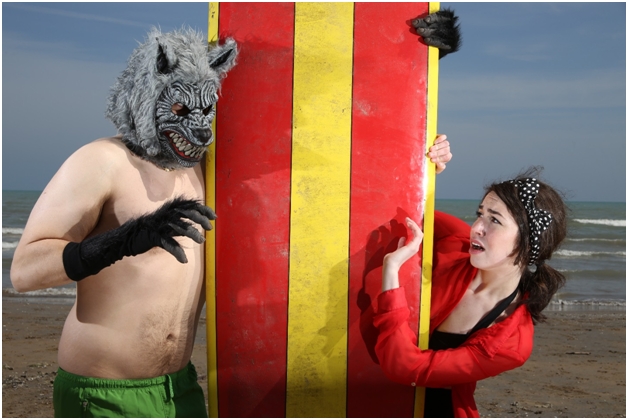 There’s an abundance of kitschy romps through pop-culture landscapes on today’s Chicago stage. Such presentations are often unimaginative and charmless. “Attack At Bikini Werewolf Beach Part II” is a pleasing exception.

In the tradition of 1960s beach party movies, Robot vs. Dinosaur’s production features urgently youthful white twentysomethings cast as irritatingly buoyant white teens. The bubbly ensemble surf songs that set the scene crest just above insufferable. The fun-in-the-sun lyrics are deliberately maddeningly banal, but the collective Robot vs. Dinosaur crew responsible for the script manages to push the jokey numbers for the few laughs they’re worth and then let up just before it’s all too unbearable. Later solo or duet numbers rely less on testing your endurance and provide more outright humor.

Blending beach (setting, songs, surf contest, summer vacation, flesh in bikinis and swim trunks from start to finish) and horror (werewolves!) with the help of some less-than-obvious connecting supporting characters (Stephanie Jones’ fortune-telling gypsy, Geoff Crump’s industrial tycoon tyrant, Pat Rourke’s rule-spouting Ranger, Tristan Tebeau’s British Invasion heartthrob, and Rinska Carrasco as a ridiculously sensuous Latina surf expert) the comedy rarely succumbs to predictability. The stylistically dated but original slang the show inevitably relies on for much of its humor is creatively inventive rather than tired or even familiar.

Director Nat Topping keeps the cast wholly locked into the absurdity of a farce that ranges from teen romance angst to shrieking confrontations with cheaply costumed lycanthropes. As befits such silliness, the entirety of the werewolf costuming consists of a fanged hairy mask and a pair of gloves.

There’s no pig roast at this beach but there’s plenty of ham and the talented cast slices it thick. Hailey Fyfe is undeniable in the lead as Sandy. Terrorized by a monster, lovesick for her self-obsessed childhood beau (Adam Ston’s flummoxed Tommy), lovestruck by Tebeau’s British Johnny, remorseful, vindictive, or ebullient, Fyfe’s elastically expressive face and exaggerated emotional and physical posturing strike a winning balance between B-movie and slapstick. The rest of the cast, though offering one-note performances, each find the right note and hit it relentlessly. Mo Mckibbin as Fringie is irresistibly hilarious, repeatedly working her mute character’s one amusing trait—pantomiming the most vulgar, carnal actions in order to communicate innocently practical, sexless ideas. As implicitly gay innuendo-dropping small-time beach-club owner Uncle Tickle, Rob Grabowski screams ubiquitous sitcom character actor. And Taylor Barton’s Marty drags us into her increasingly Debbie Downeresque thoughts, proving nothing can ruin a day in the sun quite like a serious case of hypochondria.

Less a genre satire and more an intent mash-up looking for gags wherever they’re to be found, “Attack At Bikini Werewolf Beach Part II” frees itself from too many expectations and quickly gets on with the entertainment. And with saving the beach… for the kids! (Raymond Rehayem)