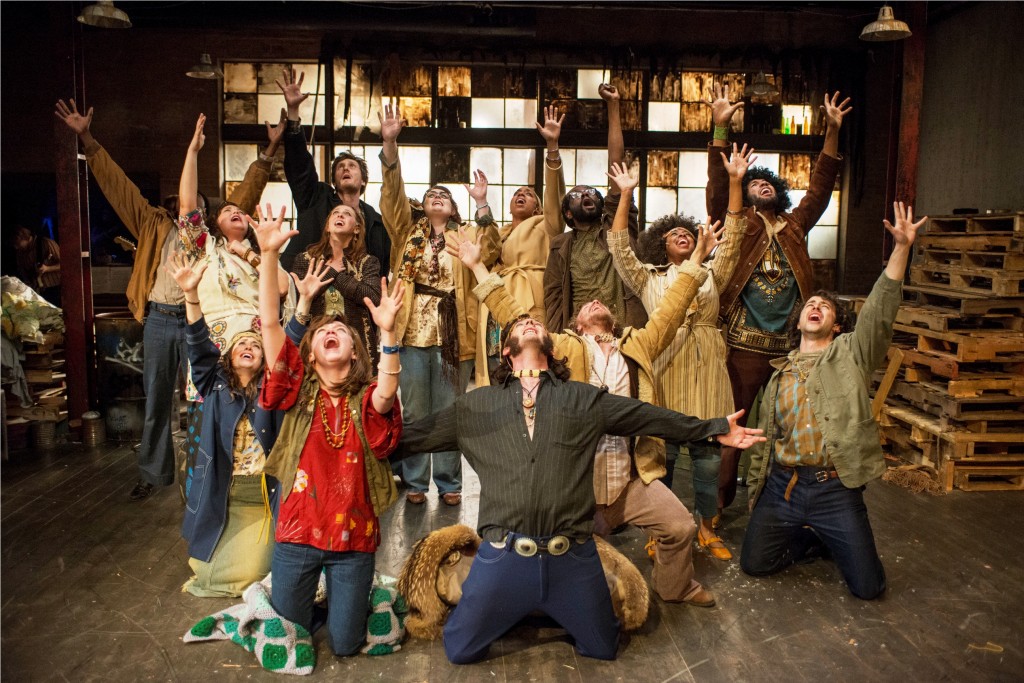 Just like they sing it in the title song, “Hair” is indeed “fuzzy, snaggy, shaggy, ratty, matty, … bangled, tangled and spaghettied.” But for all of its loose-jointed, self-indulgent raggedness, it remains the classic theatrical expression of its cultural moment. And even a crewcut Teabagger would find it hard not to dig American Theater Company’s vibrant revival of Gerome Ragni’s, James Rado’s and Galt MacDermot’s “American Tribal Love-Rock Musical.” Superbly cast and lovingly directed by PJ Paparelli (assisted by JR Sullivan), with expert musical guidance by Austin Cook, this production harkens back to the show’s roots as a street-theater-inspired experiment, conceived by two working actors and staged in a cozy East Village space far from the lights of Broadway.

Forty-six years after its premiere, the musical still packs a wallop, and if the characters on stage seem impossible to imagine today, it’s not because things have gotten better. For all their goofy extravagance, their swings from profound to infantile, the patched and fringed young romantics who populate “Hair”’s hippie tribe exude a spirited, evergreen charm.

The show is set specifically in October of 1967, a turning point in that tumultuous decade. Within one week in that month, Woody Guthrie died, Che Guevara was killed in Bolivia and thousands of kids staged a “Death of Hippie” mock-funeral in Haight-Ashbury, mourning a Summer of Love scene that had played itself out and was turning rancid. Yesterday’s flower children were rising up angry, inflamed by the genocidal, unstoppable war in Indochina and the larger structures of oppression and injustice they saw everywhere on the home front, from the inner city to their own schools and families.

Paparelli and his cast of twenty catch the knife-edge ambivalence of the sixties, oscillating between the Age of Aquarius and the demands of the draft board. Set in a semi-abandoned warehouse (grungily designed by Keith Pitts), the deliberately thin storyline concerns the anguished indecision of Claude (played with a sweet vulnerability by Zach Kenney), who faces induction into the army, and the effect of his Hamlet-like plight on his friends, especially the charismatic and outrageous Berger (Sky Seals, who shows the arrogance beneath the antics). Both are hung up not only on each other, but also on sexy war protester Sheila (played by Jane Fonda lookalike Ella Raymont). Complementing this triangle are the Afro- and shade-bedecked brother Hud (Aaron Holland), hapless but insightful Jeannie (Mary Hollis Inboden), naïve Crissy (Rachael Smith), and a dozen or so fellow hippies, all grooving in a constant swirl of music and movement.

Constructed like a sixties be-in, “Hair” is all about atmosphere, and this production has a pitch-perfect vibe, going down like Brecht on acid. With three dozen or so songs to get through, there’s little time for dialogue or character development. Yet by the end we feel we know these kids, revealed through an easy, jazzy flow of asides, schtick and soul-baring songs, in styles ranging from ballad to cabaret to rock anthem.

The original “Hair” was more than a musical: with its language, nudity, druggy dramaturgy and mood of incipient revolution, it was a provocation, encroaching on the border between stage and reality. Original cast members, chosen in some cases for their horoscope, were expected not just to perform but to believe, and some actors—notably Ragni, who created and played the part of Berger—melded with their roles. Watching “Hair,” audience members knew that something was happening, and that they were part of it.

This production could use one more edit—the group trip in Act II goes on a good twenty minutes too long. Worse, the miking of the performers in the pint-size ATC space defeats the purpose of the intimate staging, and goes against the work’s funky grain. These are just quibbles, though. The show succeeds not just in depicting but in creating a real, felt sense of promise and community, beyond the limits of conventional narrative and characterization. In 2014, as in 1967, having once seen “Hair,” everything else seems old-fashioned. (Hugh Iglarsh)