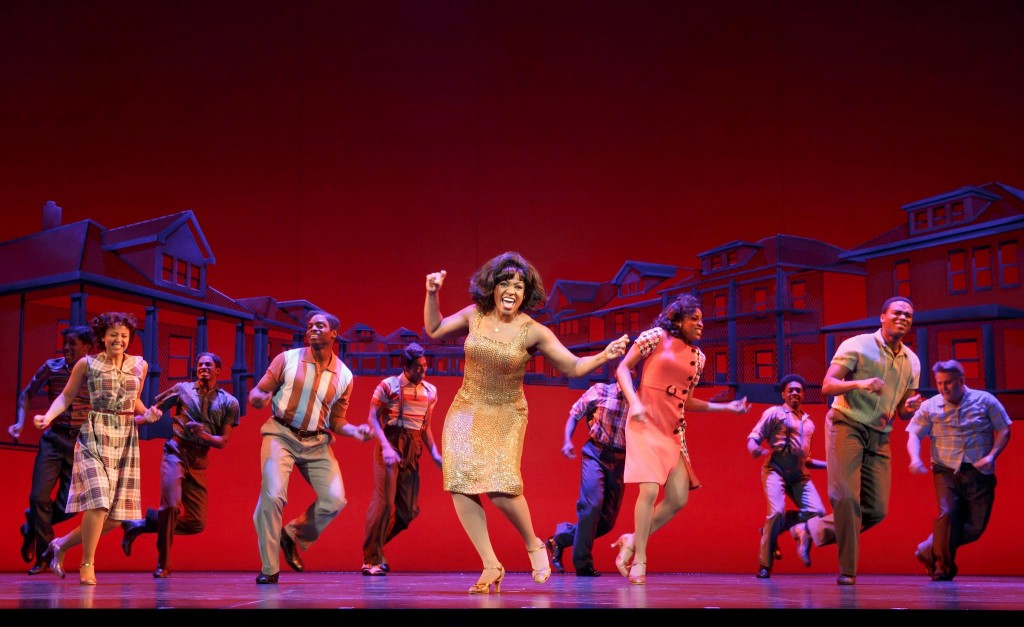 “A song is something with a beginning, middle and an end, ” Berry Gordy (Clifton Oliver) advises Smokey Robinson (Nicholas Christopher) early on in “Motown the Musical.” It is not only the deepest, but virtually the only creative insight offered in a three-hour show that attempts the gargantuan task of telling the story of Motown record label founder Gordy and the label’s many groups and stars throughout the decades.

It is easy to understand Gordy’s frustration and his need to pen a show like this (he wrote the book of the show, based on his autobiography). One can almost picture him foaming at the mouth at the success of a show such as “Dreamgirls,” about a fictional all-female group from Detroit that has an uncanny resemblance to Gordy’s super group the Supremes, or “Jersey Boys,” based on the story and music of Frankie Valli and the Four Seasons. Geesh, there have even been jukebox musicals of songs of Abba, Billy Joel, you name it. And here’s Gordy, sitting on the song catalog of all song catalogs. How to make that work on Broadway and still tell his own story in his own way at the same time?

One way definitely not to do it is to wedge in a few bars of the biggest Motown hits whenever and however you can, relentlessly, throughout the entire evening as “Motown the Musical” does. How disrespectful to those wonderful records, to hear them rendered in such truncated fashion and put out like a Detroit automobile assembly line, one right after the other, merely to solicit applause for the audience’s ability to recognize them go by for a few moments.

There are fifty-some such song fragments, and little rhyme or reason to when they are heard or why. Some appear embedded within the storyline, such as it is, sticking out like a sore thumb when they are intoned, often quite oddly, by Gordy’s character rather than the artist(s) who performed them. Others appear within a fly-by concert context.

Some might think that the excuse to hear so many Motown classics live back-to-back might be enough to justify seeing “Motown the Musical,” however skeletal the narrative or truncated the songs. The problem is that even that aspect of the show, which you would think would be a no-brainer, is problematically handled. The essence of the Motown sound was its energy and momentum and Gordy’s talent for searching out and molding unique artists with distinctive voices, approaches and in the case of the groups, their ability to flawlessly harmonize and blend. The misguided thought here is that Broadway musical veterans are the folks to accomplish this, which gives most of the performances a rather bland, antiseptic quality. Even the band is a show band rather than the type of musicians best-suited to bring authenticity to the Motown sound. It often feels like a lounge act does Motown, particularly an Act II segment where Diana Ross (Allison Semmes) milks “Reach Out and Touch” with audience participation.

As for Gordy, who was there at Thursday night’s opening to take a curtain call with no less than Smokey Robinson and the large cast and creative team—quite frankly the most exciting moment of the evening, but not one likely to repeat itself eight shows a week—the show treats him as an omnipotent figure who, aside from not being able to keep up with Diana Ross sexually, his only revealed flaw, seems to walk on water.

We receive little insight into who he is, where he came from, his creative process or how he was able to accomplish all that he did. The biggest challenge Gordy faces in the show is whether or not he should bother showing up to the Motown twenty-fifth anniversary celebration since so many of the artists who he had created had unappreciatively left his label, like disciples who had betrayed him. We never get to know him nor those that he discovered or worked with as most make little more than cameos.

A Motown revue done with carefully chosen full songs and perhaps with a few anecdotes as to how those songs and their artists came to be done with lots of heart, the way Jackie Taylor and the Black Ensemble Theater regularly do, performed by artists and musicians skilled at the unique styles needed to pull that off, would make for a far more satisfying evening. (Dennis Polkow)