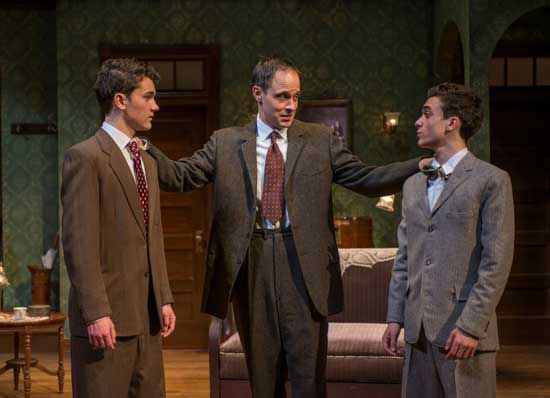 “You can’t keep cancer a secret forever, can you?”

In the emotionally and factually fat exposition scene that begins Neil Simon’s autobiographical play “Lost in Yonkers, ” a father reveals to his two young sons how he and their deceased mother had attempted to shield them from unpleasant truths. Having spent everything to afford care for his dying wife, and then borrowing the rest from a loan shark before the never-seen, yet omnipresent wife/mother figure has passed, he presses his mother into caring for the boys while he takes traveling sales work that may allow him to pay his debt before pounds of flesh are weighed. But corporeal cancer isn’t the only variety that holds court in Neil Simon’s Yonkers; anger and hatred and lies eat away at both the physical and spiritual bodies of everyone in the family. And it remains to be seen if the injection into the dynamic of the brothers is sufficient catalyst to lead them to remission.

Director Devon de Mayo leads her cast through the minefields of this Pulitzer-winning piece. Simon’s wildly successful turn from comedic, commercial vehicles to self-exploration gave us a work that vomits out great personal pain, with only brief moments of the old chuckling Simon to save us before we fall too far, and this makes for exciting and hair-raising challenges for the players. Underneath the linear, episodic plot structure whirlpools of heart-disconnects swirl. The broad, sweeping character arcs that the writing demands can only be fashioned internally by artists who commit to the material. And in Northlight’s production we have that in spades.

As sons Jay and Arty, Alistair Sewell and Sebastian W. Weigman carry the burden of being the conduit through which the other characters reach for each other, and as such, are rarely offstage. They give fine, layered performances of young men coming of age in the eye of a family storm. As their father Eddie, Timothy Edward Kane fights against the sentimental even while living the pain of loss and the necessity of self-discovery right before our eyes. Erik Hellman’s Uncle Louie, having graduated from the grandmother’s school of emotional thievery and learned to make his living in a world of fiscal crime, gives us lightning-fast switches between laughter and tears, and Anne Fogarty’s Aunt Gert shows the boys what life might be like for an escapee, tears tamped down and dried under layers of sandy determination.

But the battle that determines the outcome of the war is fought between Ann Whitney’s Grandma and Linsey Page Morton’s Aunt Bella. The craft that equips them to plumb such dark and horrific places, and the artistic alchemy that allows us to go along for their ride, landing unscathed yet wiser, is not to be missed. (Aaron Hunt)