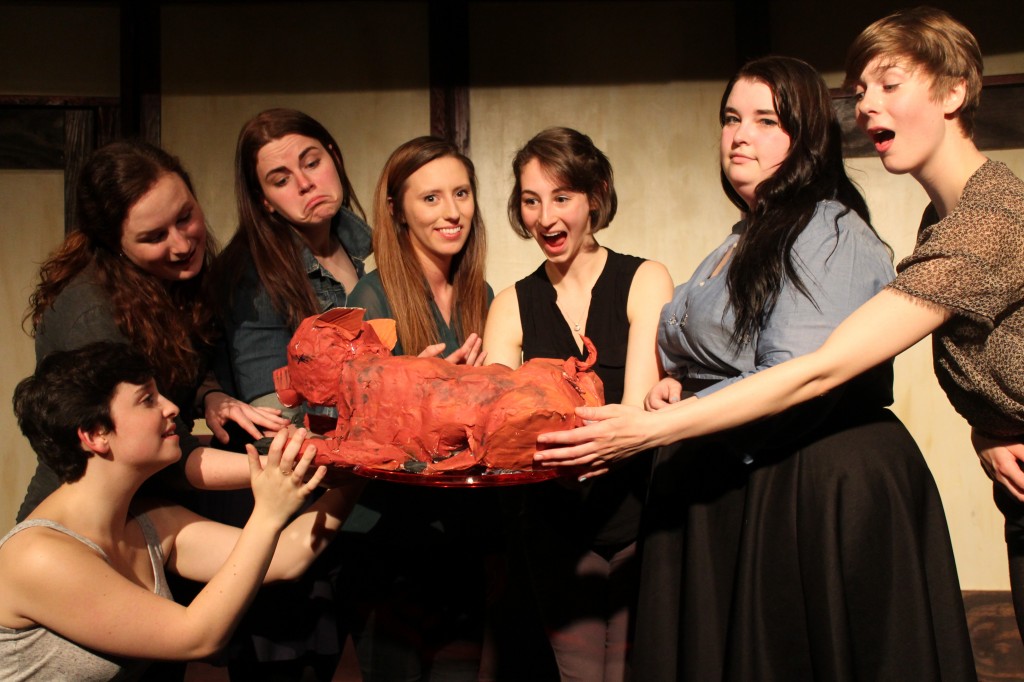 Everyone’s got to eat, right? But not everyone has a healthy relationship with food. In fact, it’s estimated that over twenty million Americans are affected by an eating disorder. Women tend to be particularly impacted. While illnesses associated with eating disorders are no laughing matter, the women of “Table Manners” at The Public House Theatre certainly strive, and often achieve, a chuckle when they share their stories and struggles of “female mastication.”

After a champagne toast to their “food baby,” the ensemble of Karly Bergmann, Jenelle Cheyne, Kaitlin Larson, Ellen McMahon, Grace Palmer, Amy Rose Ramelli and Elianna Stone perform a series of skits, monologues and comedic songs to illustrate just how complex their connection to various cuisines really is.

While the show is fairly minimalistic in its set, it relies on various props (including a fake pig named Shamus) to drive home its points. Most pieces don’t overtly touch on eating disorders, but a few—like a mother/daughter lunch scene—illustrate potential causes. Two of the most hilarious sketches of the show are the “Food Pigeon” raps, performed by Ramelli and Palmer. In the pieces the women liken themselves to birds and discuss how food impacts the body, whether one realizes it or not. At the end of the first piece, they fly off to their next food adventure and eventually soar into the realization that the more nutritious foods they consume, the better they can feel.

One of the most serious pieces of the show is a monologue by McMahon, where she recites, “I used to be fat.” It’s a deeply honest piece with before and after pictures of her and her journey through weight loss. It’s not a barrel of laughs, but it’s real and raises the question of which is better: being thin and constantly being seen as an object or being heavy, happy and invisible.

There are a few pieces that hardly touch on food or eating, such as a monologue about getting picked to be Mrs. Popper in “Mr. Popper’s Penguins” as a child or an ensemble “Bathroom” scene, which make it hard to understand the real through-line of this production. On opening night the show ran over its seventy-minute runtime and had an oddly placed intermission after a take on the Bruce Bogtrotter cake scene in “Matilda” leaves the stage quite messy. But after it’s cleaned up and the show resumes, the ensemble’s first piece of the second half spills bananas on the stage, making the intermission to clean seem somewhat pointless.

Luckily, there is a bar at the theater and patrons can bring their beverages in, which aids the flow of the second half. “Table Manners,” directed by Cassie Ahiers, brings to the table a show that is clever and poignant, but is unmannerly executed. (Mary Kroeck)