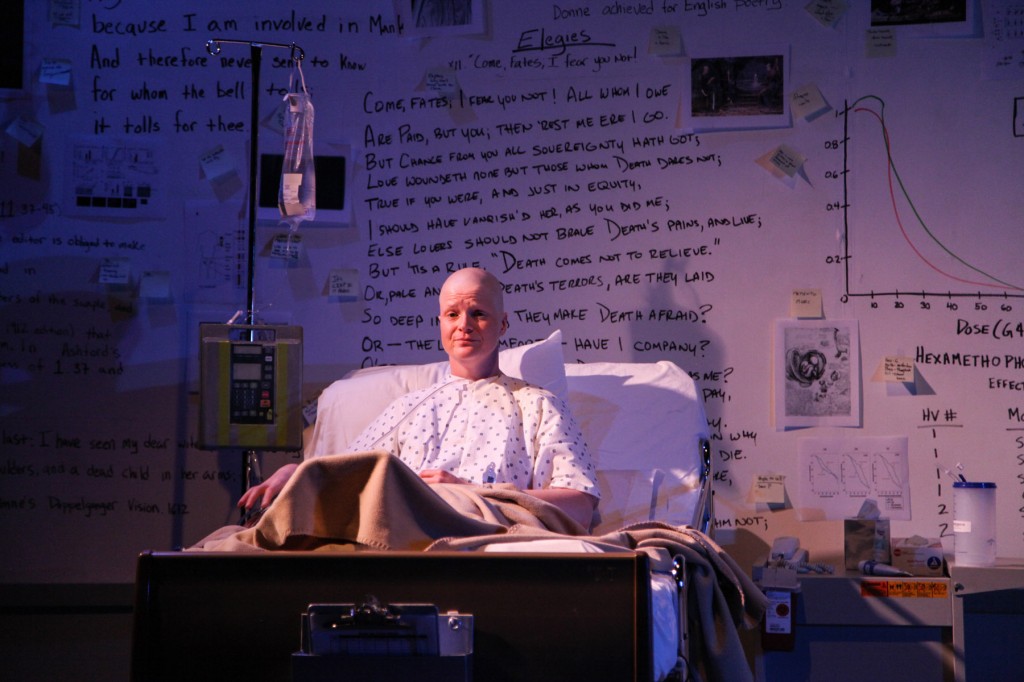 “Now is a time for, dare I say it, kindness. I thought being extremely smart would take care of it. But I see I have been found out.”

The play takes place in a hospital setting and Jeremiah Barr’s set design includes a back wall scribbled full of important quotations. Various medical furnishings—a bed, a pole to hold fluids, stools, wheelchairs, etc.—fly around balletically to classical music during the scene shifts, partnered by stone-faced, task-focused medical personnel. Head shaved and bedecked in the requisite hospital packaging, Dr. Bearing (Alexandra Bennett) shares her thoughts and the beginnings of feelings with the audience as she undergoes the most extreme form of chemical therapy available.

“…but as I am a scholar I feel obliged to document what it is like here, most of the time, between the dramatic climaxes. In truth it is like this: You cannot imagine how time can be so still. It hangs. It weighs, and yet there is so little of it. It goes so slowly and it is so scarce. If I was writing this scene it would last a full fifteen minutes. I would lie here and you would sit there.”

A better talker than a listener, Vivian doesn’t hear that the punishing course of drugs cannot save her; she is merely being studied.

But Vivian continues to critique and teach the other text-bound characters and the audience-as-character, until her illness imposes such severe sanctions that her fine mind is sufficiently subdued; can she learn to receive, and finally to share, rather than lecture?

Bennett is given the herculean task of presenting a character that the audience really needs to enjoy, at the very least, even while laying bare her character’s deep intellectual narcissism. And she never leaves the stage. Ms. Bennett pushed a bit at the top of the performance I saw, but once she started to breathe and relax, which was very soon, she was a complete joy.

Robert Tobin hits just the right notes as Vivian’s primary cancer physician, and Drew Wieland’s Dr. Jason Posner, a young clinical fellow in medical oncology specializing in research, affords Vivian an opportunity to look at a model of her young investigative self. Wieland plays Posner so steeped in academic self-love without a connection to humanity that no one in the audience can fail to catch the lesson. Lona Livingston is wonderful as E.M. Ashford, a professor who attempts to entice Vivian to go outside, to watch people, to take in life and learn to connect so that her academic studies can reach a new level. But the key to the evening’s success is in the work of Alison Plott as Vivian’s nurse, Susie.  Plott is the audience’s way into the story. She holds out her hand to us, and doesn’t let go. (Aaron Hunt)