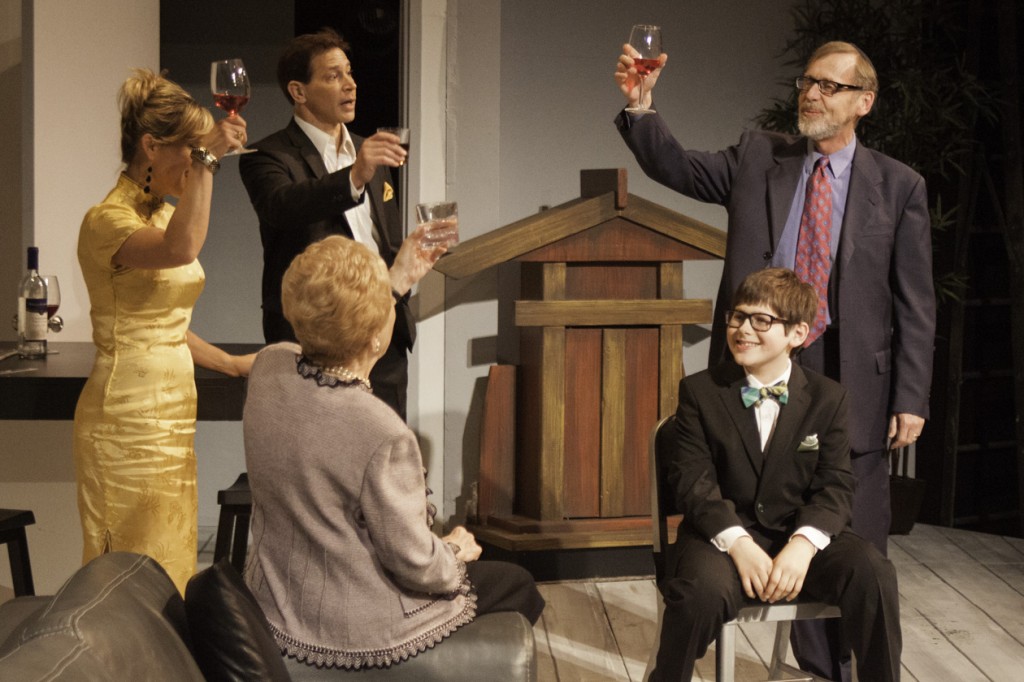 Just a few blocks from I Sachs Sons shoe repair on Roosevelt, Provision Theater Company coincidentally presents a contemporized take on the biblical tale of Isaac’s son Jacob and his struggle with God. It’s no coincidence that Jacob’s surname in “JACOB” is Isaacson. Though such lack of subtlety in familial appellation may seem nearly inevitable, it’s an early sign of the script’s obviousness. As explained by Rabbi Rick (Chuck Spencer) and explored by Jacob’s newly bar mitzvahed son Josh (Johnny Rabe), the act of naming gives something its meaning. This story’s meaning is about as nuanced as the naming. Amidst the ensuing strife Josh even exclaims “We’re supposed to be a family!”

We meet this Jacob, a wealthy Chicagoan, as a lifetime of deception involving his brother’s right to their father’s estate reaches a boiling point. John Mossman manages a satisfactory performance in the wholly unsympathetic lead, a cowardly liar who fears his deceit is at its end. The supporting characters merely reflect Jacob’s dishonesty and the consequences of his panic. Jacob’s attorney Mike (Rod Armentrout) accepts being scapegoated for smoking in the Isaacson’s home, but he’s having his doubts over his client’s honesty and is growing concerned about his culpability in Jacob’s legal affairs. Jacob’s wife Rachel (Lia Mortensen, also co-director) is relegated to the role of put-upon, justly suspicious wife with an unexplained faith in her husband’s innate goodness. They both admonish Jacob for arming himself in anticipation of his wronged brother’s return, while schooling the unconvincingly incompetent Jacob in rudimentary gun loading.

Renee Matthews is wryly effortless as the archetypically inappropriate big-mouthed matriarch Becky, knocking on the fourth wall for some of her more off-color pronouncements. She’s also given more agency than Jacob’s wife, lawyer, and son; as in the bible, Jacob’s mother initiates the manipulation of the dying patriarch’s final wishes. Considering their vested interest in keeping secrets, Jacob and Becky are too quickly loose-lipped as the first act unfolds.

Imbued with an altogether divine agency is the Repairman (playwright and co-director Timothy Gregory). Jacob and this mysterious, vengeful surveillance technician engage in an expertly choreographed dusk-till-dawn wrestling match which garners some well deserved laughs. Appropriately for a fable of potential fratricide, this fight derives its humor from childish exchanges, including a snack break and a pillow fight. It echoes an earlier playful fight between Jacob and his son. That play-fight is a father-son bonding moment, just as Jacob’s struggle with the angelic repairman finally bonds Jacob to God. As brother Eli, Bryan Kelly only appears after the titular hero has unsurprisingly learned the error of his ways. By then, Eli’s presence is largely unnecessary. It’s not Jacob’s relationship with Eli that’s central to the outcome, but rather Jacob’s relationship with God. For all the focus on family dynamics and sibling rivalry in the show’s first half, a second half tale of two Isaacsons that gave Kelly some room as a performer and he and Mossman a shot at delivering on the building expectations of fraternal confrontation would likely prove more revelatory. (Raymond Rehayem)