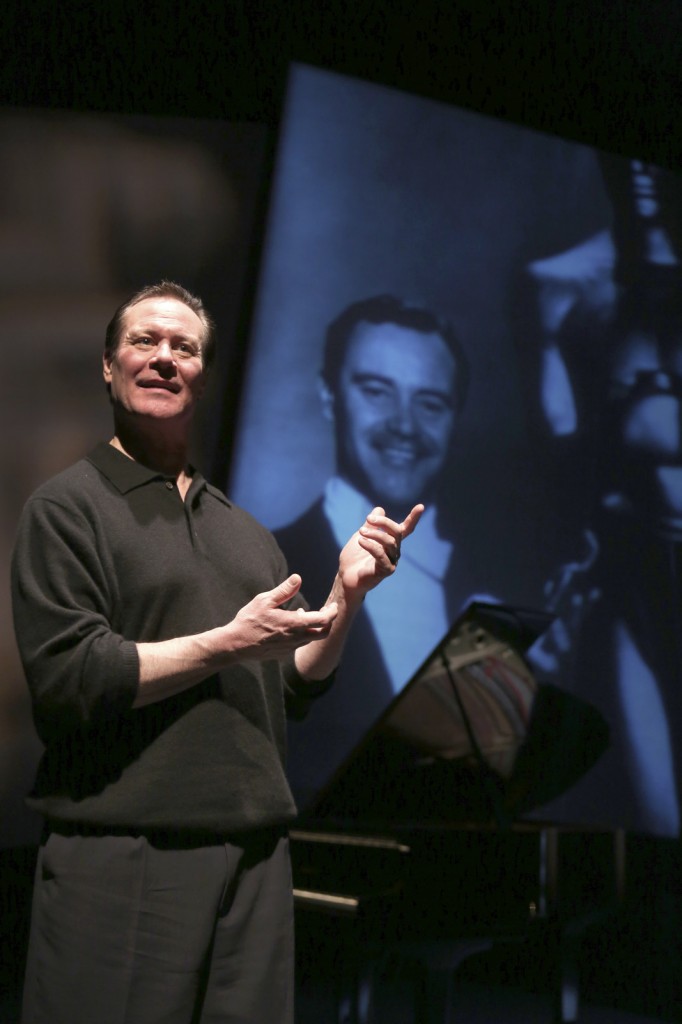 The kid’s a natural. Of course, the kid’s a grown man and what seems to come so naturally is his onstage embodiment of his famed father, two time Academy Award-winner Jack Lemmon. Chris Lemmon’s impersonations of Jack’s notable friends are much less convincing—I’d forgotten how many Jimmy Cagneys I’d seen when I was a kid until the younger Lemmon reminded me—but that’s hardly a quibble. If anything, in contrast to his night-long stint as his dad, Lemmon’s workable but unremarkable quick turns voicing Cagney, Gregory Peck, Marilyn Monroe and others merely emphasize the strength of his main performance. After all, it ain’t Chris who’s passably mimicking those other stars—it’s Jack. What Chris is doing is so spot-on and inherited it’s less impersonation and more resurrection. As the show’s name promises, “Jack Lemmon Returns.”

Written and directed by a man of many one-man (and one one-woman) shows, Hershey Felder, this Royal George Theatre world premiere is part primer on the senior Lemmon’s extensive acting career and part Parenting Foibles Of The Rich And Famous. Altogether, it’s clearly a loving homage to the man Chris describes as his best friend.

While hardly an expose, it’s no whitewash either. Even more than this production celebrates the late star’s life and talent, it serves as an extended apology to his child for his failings as a dad. Throughout,  father addresses son—ostensibly seated offstage in the theater, but literally onstage portraying the father—in a manner alternately affectionate, admiring and remorseful. I’m not certain this was the intended primary focus of the show, but it’s the most lasting impression of the ninety minutes we spend listening to the uncannily revived Lemmon. At times it gives the show an air of family therapy in absentia, yet leaves no doubt these issues were ironed out while the elder Lemmon was very much still around.

The late Lemmon turns out to be an engaging host, and the night an enjoyable one. Aided by rather routine use of projections, the dearly departed raconteur takes us through what amounts to a scrapbook look at his life. Amusing anecdotes about Lemmon’s more legendary pals and details of his own rise to fame lighten heavier moments dealing with Jack’s personal shortcomings as a father and husband and his struggles with alcoholism, which parallel those of his most respected “serious” onscreen roles.

It’s Jack Lemmon’s determination to succeed in blending the dramatic and the comedic that offers the one intriguing element of the show, and not coincidentally brings the one illuminating use of projection. Watching a loop of his idol, French director and actor Jean-Louis Barrault of whom we hear repeatedly, an eternally awestruck but precisely studied Lemmon lovingly imitates the movie mime’s delicate gestures. Acting is what made Lemmon a star, and why all these years later an audience sits far from Hollywood to catch a glimpse of his star power presented by his capable son. This peek into how Lemmon honed his craft far outshines the rest of this endeavor, and reflects the range which Lemmon recognized as essential to his art. (Raymond Rehayem)

In life we have our fathers for only so long. When it’s literally “so long” we are left with a painful void. This story which is unique by way of its composition, deals with a top American movie star and his son from an immediate perspective, which is in an “isolated” scenario. Because of that, it is certainly worthy of public exposure. This story evolved from real life, into this play from; a book, a documentary and a one man show. If we look back at the career of the star’s landscape, it is dotted with just mere glimpses of… Read more »