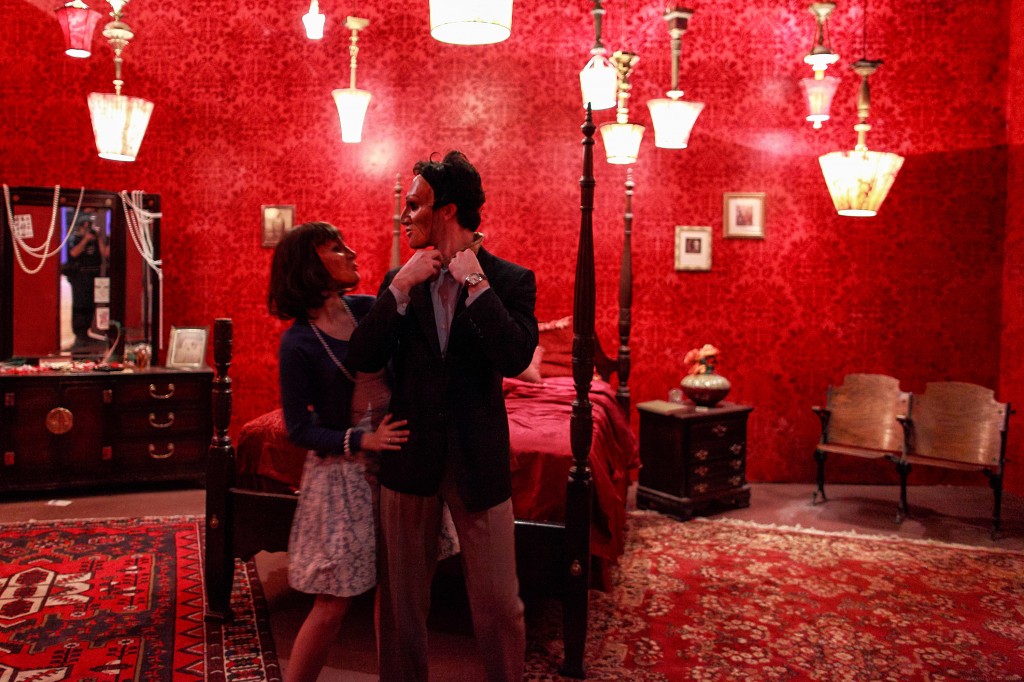 Just an upward glance and a bird on a wing away from Redmoon’s vast Pilsen warehouse space there’s a building emblazoned with the graffiti “Memories Are Sacred.” While Shakespeare’s “The Winter’s Tale” is the clear springboard for Redmoon’s Spring Spectacle, this spray-painted sentiment could have just as likely inspired the fetishistic visual cataloging of life’s stages that serves as this show’s intricate backdrop.

Upon entering “Bellboys, Bears, and Baggage,” theatergoers are faced with three doors and one of many literary allusions written on the walls or otherwise eminent throughout the surroundings. It’s Shakespeare’s oft-repeated line depicting us all as merely players upon the world’s stage. From this first of many decisions which you, player, make, you immediately recognize your choice’s irrelevance. It’s the same world/stage beyond all three doors, with myriad scenes and rooms for you to focus or pass on.

A half dozen men in identical masks dressed in matching outfits topped off with a hint of aristocracy (hint: an ascot) and a half dozen women looking somewhat more casual in their masks, skirts and cardigans interact with each other—and occasionally with the audience—in alternately tepid and hectic scenes. Some take place on the main floor, central to all action, some on individual stages set opposite each other in the main area, and some in ornately decorated rooms suggestively identified by doorway plaques as The Capitulation Room, The Accusation Room, The Subjugation Room and so on. These shifting pairs are effectively expressive while anonymously interchangeable, engaging in tense wordless exchanges that at times turn flirty and playful, and other times burn with unspoken allegations, fear and loss—yet always dissolve by approaching but never reaching resolution. The masks do quite a bit of the work, the facial expressions affixed in a permanent accusatory glare. Or is that remorse? Either way it’s not a smile upon these shared visages.

There are other masks too—those that complete the many bear costumes. Shakespeare’s most hilarious stage direction plays out repeatedly, as bears pursue these men and women and assorted bellhops (boys and girls), in and out of the rooms where the more private and elaborate dramedies unfold.

The bellhops are more directors than attendants, nudging some of the action. Their friendliness is snidely detached. They achieve a look on their collective face somehow less human than the masks on the aforementioned romantically entwined. The funniest line I heard all night came from the accessibly human bartender, who had just served a stiff drink to a resigned white bear.

Just like life, there’s plenty of baggage. In this case, or suitcase, it’s quite literal. Luggage with labels like “mistakes” and “faults” is everywhere. Even the music, which you may or may not choose to listen to in certain rooms, comes in the form of baggage: vinyl spinning on little suitcase turntables.

High above all the action, on the upper level, are exquisite installations that further explore the night’s themes and are essential viewing.

Though you’re free to move among and above the action at your own pace and of your own accord, one routine grabs everyone’s attention as the assembled ascot and skirt crowd suddenly dance to a propulsive cover of “I Heard It Through the Grapevine.” Part come-on and part recrimination, it’s the sole segment that stands out as a “production number” and it astounds as a choreographed show-stopper, enjoyably theatrical in a setting generally akin to a gallery.

In a more insular, creepily absurd and humorous scene, within one of the rooms you may endeavor to visit, a man is forced to confront his fear of responsibility, in the form of that most beloved human-animal hybrid: a Teddy bear. It seems the masked man has sired the toy baby beast presented to him.

This cuddly chimera aside, sadly there’s no Shakesbear. But the merely human playwright himself is indeed there, milling about, more observer than orchestrator. In this you’re on par with the Bard. As audience, you’re surely more immersed than in your typical theater experience, where you take a seat and stay put. But as is often true in this world, despite your choices you’re still just along for the ride—enjoyable as it may sometimes be. (Raymond Rehayem)