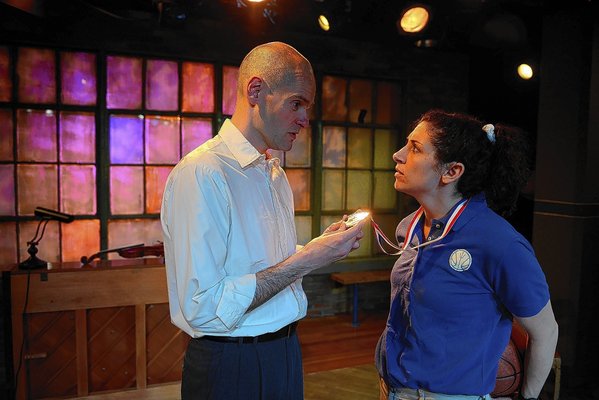 Modernist composer Charles Ives may be one of the most famous unknown composers in American music. Largely ignored during his lifetime, Ives’ innovative work continues to influence composers internationally. However, Ives really excelled at balance; in addition to his musical accomplishments, he served as captain of his high-school baseball team and played varsity football at Yale. He later achieved acclaim as an insurance executive and actuary, pioneering the field of estate planning. Charles Ives successfully channeled his passion into numerous expressions.

Violinist John (David Belden) and his basketball-obsessed daughter Laura (Stephanie Chavara) are not as successful in negotiating their passion or accepting each other’s, despite guidance from the memory/spirit of Charles Ives (Jamie Vann). John resents the family responsibilities that hold him back professionally; Laura begrudges her father’s constant rehearsal and his inability to recognize the importance of her ambitions. Belden nails his character’s clueless hyper-focus; the fact that he can back up his acting chops with solid violin playing is icing on the cake. Chavara also masters Laura’s single-minded concentration, infusing her monologues to the team she coaches with palpable desire. Vann charms as Ives, reminding us that to truly explore our passion, we have to forget everything we know.

Jessica Dickey’s script runs into roadblocks as John and Laura attempt to overcome their differences; the struggle to find common ground seems a bit pat and the plot twist isn’t all that twisty. But Dickey’s language is lovely and she strikes the right balance between humor and pathos. Keira Fromm’s staging beats back the talk-talkiness of the piece and correctly hits its numerous rhythms, ably music directed by Mike Przygoda. The piece plays as an elegant ode to respect and flexibility. (Lisa Buscani)