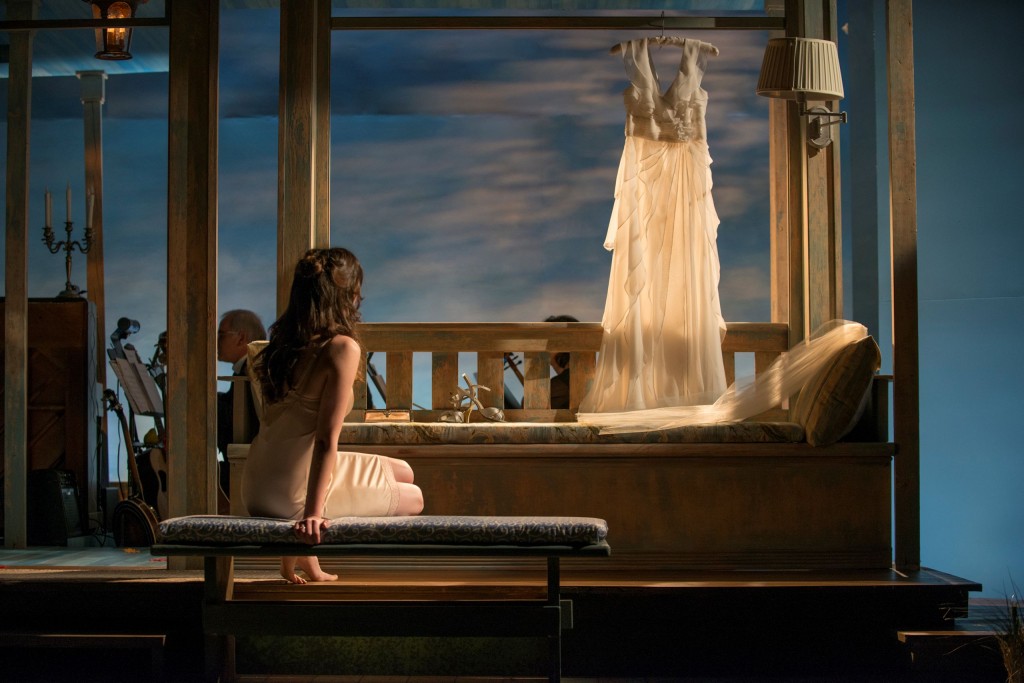 Laura Eason, book writer of Writers Theatre’s new world premiere musical “Days Like Today,” says of playwright Charles L. Mee’s work, from which “Days” borrows and burnishes, “It is epic and expansive and messy and highly theatrical and deeply thoughtful.” Composer and lyricist Alan Schmuckler writes, “It felt to me that music would make manifest the interior lives of (his) characters, as they experienced moments of love and loss that I recognized from my own life. Music felt like a good fit. That was the start.”

And indeed it was. Schmuckler’s musical based on Mee’s work was given a reading which Writers artistic director Michael Halberstam attended; Halberstam invited Schmuckler to work further on the piece with Writers, and Halberstam brought Eason on board to write the book. Staged readings and workshops, refocusing, a new book, new music, and something altogether other, and yet explorative of a direction in which the lyric theater is now traveling, was born.

These new creatures that perhaps are still musicals, but may careen in the direction of contemporary opera—while giving nod to the long-ago plays-with-music—give us the opportunity to examine eternal themes and right-this-minute challenges bathed in the same sort of layers as tangible existence, yet elevated and elucidated by the addition of melodies and poetry. Who among us has a life that isn’t “messy”?

“Days Like Today” blows our hair back with the multiple-colored moments of love and anger, of longing and stubbornness, of confusion and clarity. Weddings might happen. Marriages might disintegrate. When does an affair become a relationship? What is a family? And while we ponder the consequences and the questions, someone has to fold the laundry and food has to be prepared and deadlines have to be met and life swirls like a hurricane, and all of it happens at once. “Days” answers with Eason’s book, alternating careful thought with foot-in-mouth brusqueness, Schmuckler’s sometimes-rhymes-always-poetry and glorious melodies that are spoken and curt words that are sung, musical direction and orchestral collaboration shining with the singular talents of Doug Peck, and the meticulously clear-eyed direction of Halberstam.

Lyric theater stalwarts Jonathan Weir and Susie McMonagle give us parent-children, doling out truths they can’t seem to learn. Jeff Parker layers the mother’s lover in bravado and neediness, Jarrod Zimmerman beautifully voids the daughter’s fiancé’s terror-filled stomach and father’s would-be fiancé Stephen Schellhardt takes us on an emotional and vocal journey so engrossing that his story could be a “messy” music-play of its own. Emily Berman, choreographed as the eye of the family storm, shouts to be heard, spins pretty top notes flecked with dreams, and displays a warm middle voice that beautifully matches her hard-won self-reliance. Will Mobley charms as a pizza boy/renaissance man, endearing and passionate with a tenor to match, and razor-sharp timing. (Aaron Hunt)