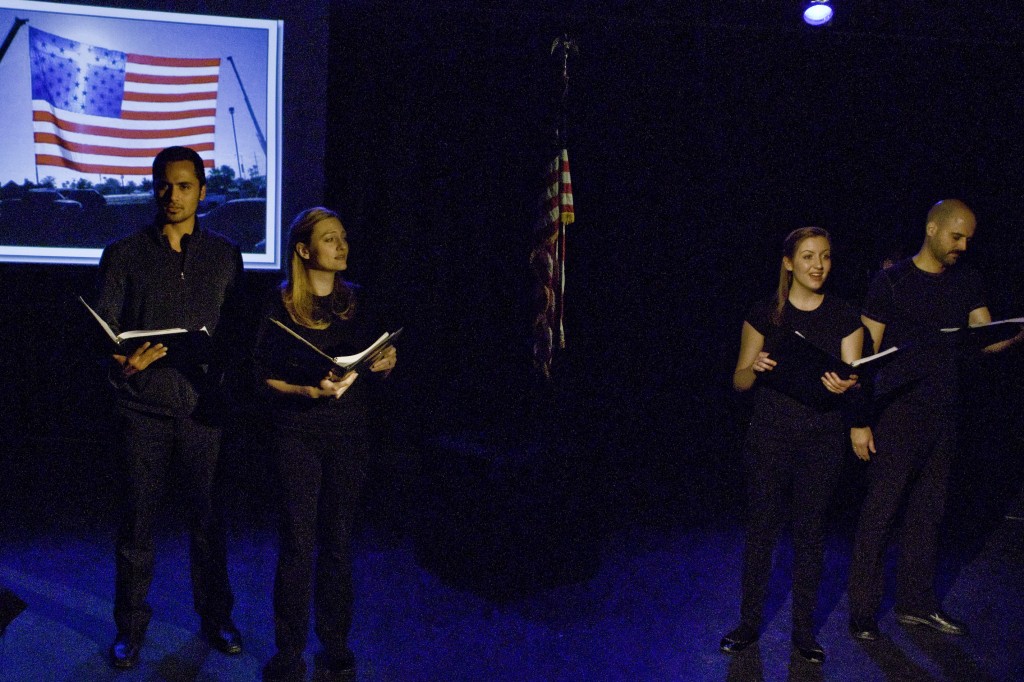 “Many mumbling mice, Are making merry music in the moonlight, Mighty nice,” sing six fresh-faced, eager-eyed young performers in unison, up the scale and then back down. David Kornfeld, musical director of “Mr. Munch has a Murmur,” is leading vocal warm-ups from behind a portable keyboard, snuggled away in The Mountain Room of Bubbles Academy, a childhood learning center in Lincoln Park, the walls painted with deer drinking from pools of water, porcupines, a campfire and tents, and a gargantuan bumblebee in front of the frosty-grey mountains.

Cast members have gathered with guitars, a ukulele, an autoharp and a swarm of highlighted, marked and re-marked pages of music and lyrics to rehearse the story of a country-music singer and his might-be girlfriend on vacation in New York City. L.C. Bernadine, who adapted the book from a short story by Mark Sanders, passes out some new lyrics, and cast and crew have a relaxed chat about how the new words will fall on the audience’s ears, and the potential to enunciate them at the required speed. We learn a lot about this entry in Underscore Theatre Company’s Chicago Musical Theatre Festival listening to the cast sing the song in question, “Keep Walkin’.” Lyrics such as “If you want to live to talk about New York someday… speed it up… move along… keep walkin’,” suggest the collision of two unique worlds. 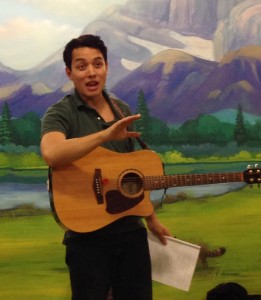 Aaron Stephenson, the director for “Munch,” suggests, “I wouldn’t hate it if we went through ‘Borderlands,’” solidifying the ensemble tone of the rehearsal. Stephenson moved to Chicago after graduation, and found himself working on a show at Chicago Shakespeare Theater with Underscore’s artistic director Alex Higgin-Houser. Underscore was growing, and Stephenson was project-hunting. Higgin-Houser is present at this rehearsal as well, making himself available for questions and passing out the requisite postcard advertisements for further distribution. The actor playing the country singer takes a seat on a mock bus bench (it’s two pink folding chairs, for now) with the maybe-girlfriend, the cast sits at the sides, and the haunting song “Borderlands” begins. The four-member ensemble provide vocals, instrumentals and play multiple characters to tell the story about the fellow with the guitar, one of two “mentored” offerings in the eight-show festival; the other six pieces are more self-produced, while the mentored projects get some extra TLC.

The second mentored show is “Anthem.” Adele Dodds Powers grew attached to a project about stories drawn from the letters and diaries of soldiers and their loved ones during times of war, originally brought to her by Rachel Payne.  Zak Sandler, who has a career in New York City playing keyboards in the orchestras of Broadway shows, coaching singers and having opportunities to hear his own compositions performed, joined the collaboration when it became clear that someone who knew something about “music theory” was required. “Anthem” has had a little more feedback during its gestation, having a couple of readings in Los Angeles and participating in a workshop in Salt Lake City; the piece is already accepted to appear at this year’s New York Fringe Festival.

“Anthem” is through-composed (there is very little speaking), and one of the conceits is that there is a musical remembrance of “The Star-Spangled Banner” in every song. But what Sandler and Dodds Powers want their audience to know is that “Anthem” isn’t a patriotic piece, as such, but a story about people who have dedicated their lives to something, and the ways in which that decision impacts the rest of their lives, and the lives of others. Dodds Powers gives Underscore and its Festival high marks for their contribution to “Anthem:” “They arranged for a crew, booked rehearsal spaces… they took care of the nitty-gritty, while we struggled with what we wanted to say. …They gave us the support that allowed us to do our work.”

The Chicago Musical Theatre Festival is a central focus of a company started by a group of friends who graduated from Carleton College. Underscore’s executive director Laura Stratford summed it up nicely, when we chatted about Porchlight Music Theatre’s “Off The Porch” new works program, the sale of The Theatre Building, and the subsequent loss of “Stages,” their New Musicals project; gifted monies in support of The Theatre Building’s work were transferred to Chicago Shakespeare Theater at that time. “While Chicago Shakespeare has done amazing work with the endowment, they aren’t on the storefront level; that means that there is an under-served part of our community, and we are stepping in.”