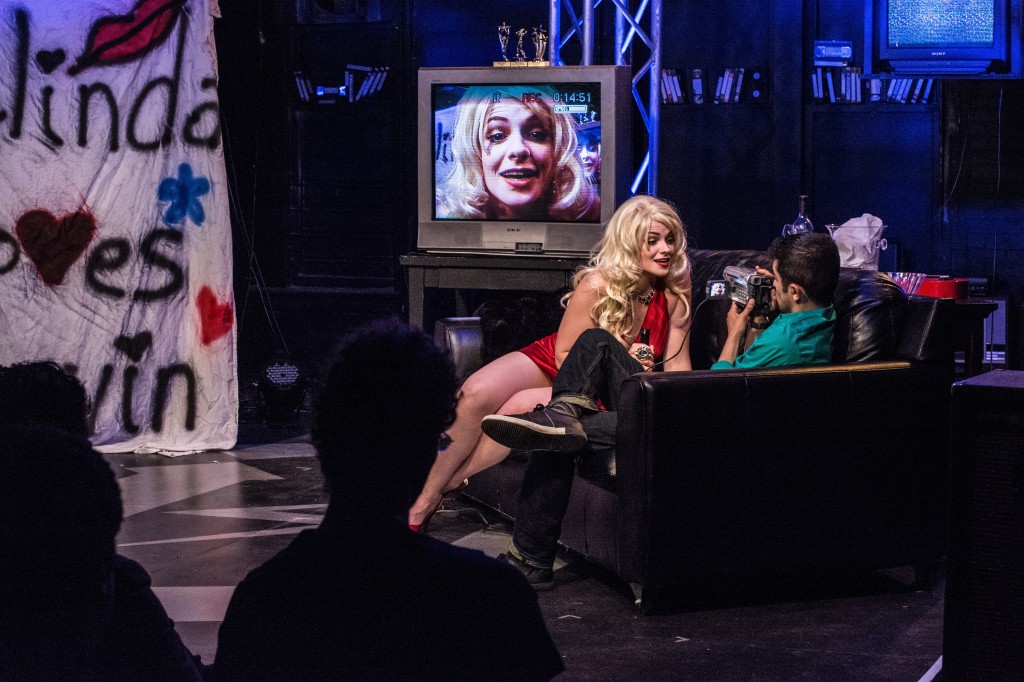 TVs are ugly and cold and the stage is full of them—the tube type to be specific, positioned where a VJ would want them and rigged as needed. The title treatment on the program is uber-metal and the pre-show atmosphere among the audience is like a bar or club. Finally, as with a particular sort of good night out, there’s a celebratory climax. Such is the skeleton of The Inconvenience’s production; the flesh follows. And, yes, there is flesh.

The precise set design evokes backstage at a rock show as pictured on the cover of a VHS tape. The stated locations shift, and roadies work between scenes to move pieces in and out. Near the end of a blaring stretch of introductory propulsive metal, the TVs get signal and reveal the angular vector logo of massive eighties heavy metal band Umlaut. With all those glowing, eye-grabbing screens, stage space for a human must be staked out and claimed commandingly. Possessing the requisite energy and an inviting but disturbing conviction in her obsessive fan tactics, Mary Williamson’s Melinda won’t surrender the audience’s attention to a screen unless she’s on it. And quickly on-screen she is, via a camcorder in the hand of an audience participant cast in the role of hapless ex. And as quickly, she owns the screen space too. At times the staging forces you to choose between watching the actress in person or on-screen, imposing the personal (live theater; love letters) into the impersonal space of television. Other viewing angles allow you both perspectives simultaneously. The audience-patsy-turned-former-lover has been enlisted to shoot Melinda’s sloppily intimate, revealing, inebriated, debatably-unhinged video love letter to Umlaut guitarist Kevin. About the first half of “Love Tapes” functions as a one-woman show for Williamson and she immediately wins over the eagerly willing audience, getting laughs with nearly every line in her opening minutes though none are even punchlines. What originally seems like a club crowd begins to sound like a laugh track. This entire first segment works as setup for the laughably desperate yet still captivating and fun bare-all hula-hoop striptease in which it culminates as Melinda’s all-out attempt to convince her rock idol to actually contact her.

Melinda, no longer dolled up but rather dressed increasingly like the x-ray technician she is, continues to make love tapes with the assistance of additional audience recruits and it becomes clear these tapes are part of a conversation. The pattern thus far is then repeated as co-star Chris Chmelik unveils the male half of the conversation. It’s a bit predictable the second time around, and loses some bite since the male lead, though socially awkward, does not exhibit the hint of madness/suggestion of stalker unreality that Melinda exudes on first sight. Throughout, the pair seek approval from each other and from the audience participants. Frequent breaks provide more metal music, often in spoof videos and VH1-style interviews on those prominent displays.

Eventually the love tapers meet and Melinda’s no longer willing to cede attention to any screen, especially if she’s on it. Hence the allure of stardom that initiated their meeting is dismissed and these two are compelled to see each other face-to-face.

The abrasiveness, the often thunderous volume and the full nudity might shock certain theatergoers but for the comfortable and demonstrative opening-night crowd it adds up to light entertainment. Director Shade Murray anchors the musical hard-rockin’ moments (whether boxed in on-screen, sung vulnerably to an unmanned camera or weighted down by a low-hung bass) while setting the interpersonal moments free to spill into chaos and off stage or stumble to a near halt. Both as out-of-bounds fan and demanding in-person first date, Williamson’s unnervingly forceful yet fragile Melinda displays some provocatively extreme behavior. But the show is mostly concerned with being a feel-good love story aimed at an audience with an ironic taste for hair-metal and an appetite for burlesque. Ironically, in the years since Penn Jillette and Steven Banks wrote this script, that target audience has likely become quite at home on FaceTime. (Raymond Rehayem)