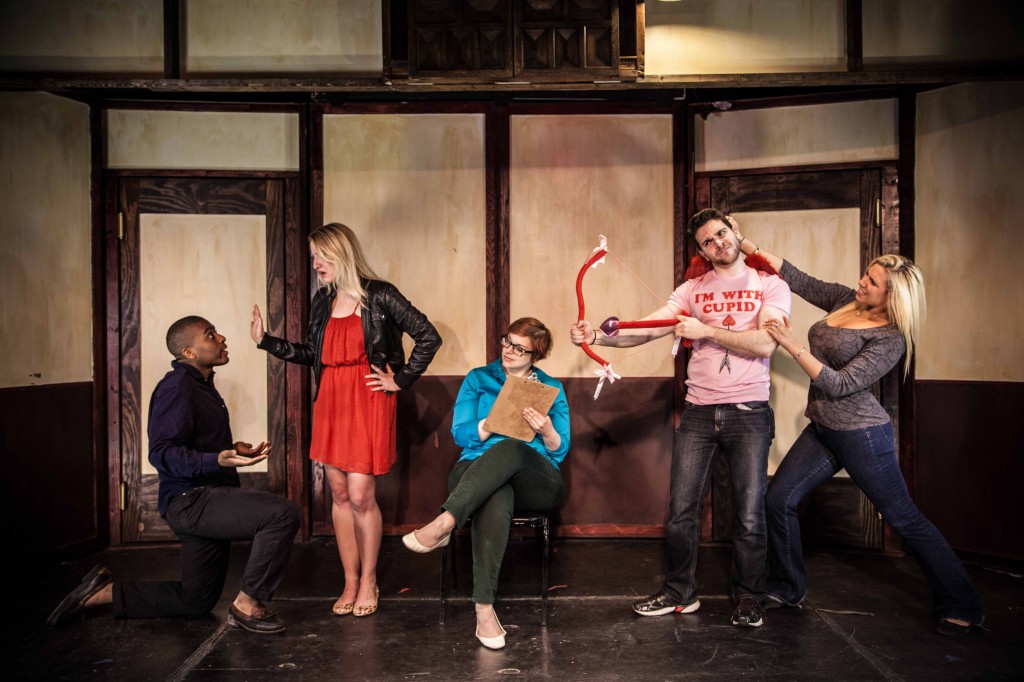 Looking for love can be a daunting task. With scores of social media and internet dating sites to choose from, most people find it easy to create a profile and start a conversation with someone online. Sometimes, internet-based relationships work out. Sometimes they don’t. But what if Cupid, that little Roman god of love, still existed and he could help make a “perfect match?”

This is the idea behind “Love Me, Tinder,” written and directed by The Public House Theatre’s artistic director, Byron Hatfield. Cupid (Mike Schiff) has turned into a grown man wearing a diaper and fake wings because internet dating sites have destroyed him and his child-like innocence. But one day, the dating site Tinder starts creating perfect matches by accident. Cupid becomes aware of this when the lovelorn Stephen (Londen Shannon) creates a Tinder profile and the first person he sees is Jen (Ashley Stein) and he immediately becomes smitten. Cupid, however, swipes her profile to the left, which blocks them from making a connection.

Jen’s friend, Linda (Mal Marcus), introduces her to Tinder and she decides to give it a try. When Stephen’s profile comes up as her first match, she is infatuated. Linda, however, swipes his profile left to show Jen that there are plenty of guys on the site and she doesn’t have to fall for the first one she sees.

This match sets off the “Tinder-sphere” and Esmeralda, a.k.a. the goddess Chaos (Jessica Kent), can’t allow that to happen. She is running Tinder and is set on destroying Cupid for sleeping with her daughter and abandoning her. She wants to destroy all perfect matches, leaving profiles that are “close but never quite right” so people keep using the site, ignorantly believing that their next swipe right could be the love of their life.

The show is funny. It’s full of stereotypical dating profiles (the homemaker, the undercover freak, etc.) which are shown on a TV screen above the stage. However, it’s stereotypes like the ones shown that the show relies on to make it work. The story doesn’t feel as fully developed as it could be and leaves a lot of unanswered questions—like why Cupid, who is so obsessed with helping people find love, is himself sleeping around and not taking relationships seriously. The show’s strongest theme is its focus on whether or not love at first sight, site or in this case, swipe, really exists. If that motif were more fully developed, it would probably be easier to swipe it to the right. (Mary Kroeck)