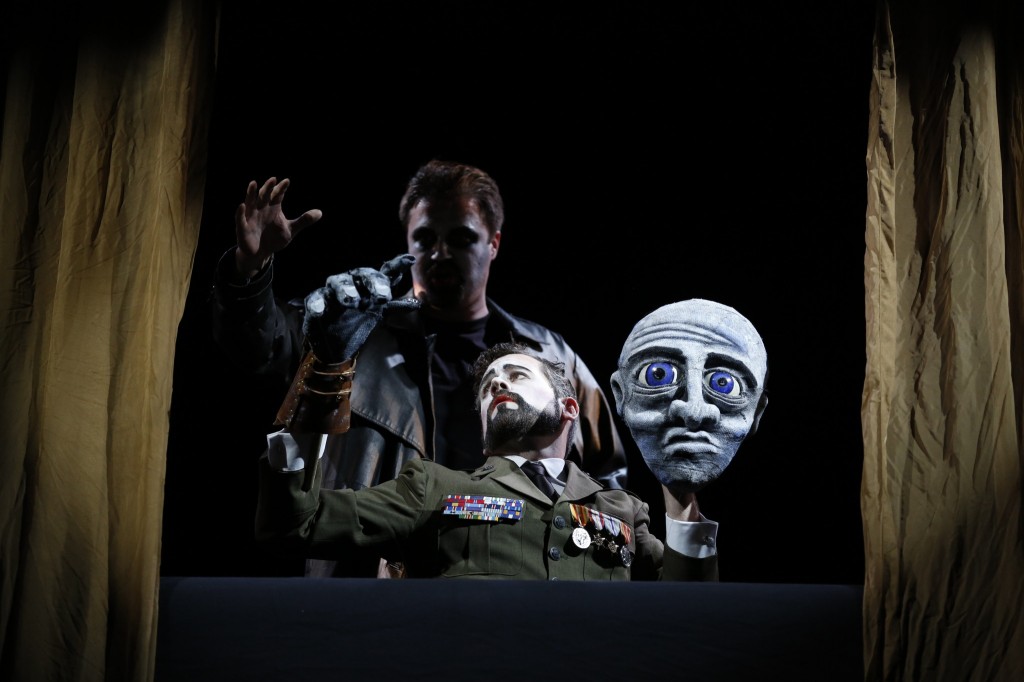 With a double bill of Viktor Ullmann’s “The Emperor of Atlantis” and Carl Orff’s “The Clever One”—two one-act pieces beautifully matched, with stories revolving around misguided rulers bungling theatrically in the year 1943—Chicago Opera Theater’s director Andreas Mitisek continues to drive the company to explore new directions and dimensions. Ullmann’s opera was penned in the concentration camp of Terezin; a rehearsal heard by the wrong people caused him to be moved to Auschwitz, where it is assumed he died in the gas chamber. Carl Orff, celebrated and living in great comfort in Germany, whether miraculously escaping censure due to political alliances with the Nazis, or sufficiently hiding his resistance work, was given a pass after the war by the American de-nazification authorities. In extraordinarily differing circumstances, these two composers found harmony in their musings about death, life, sufferance, authority and, along with their librettists, either out of interest or necessity, cloaked it all in broad strokes of humor.

Multi-gifted Mitisek, able to pull both directing and conducting out of his basket of tricks, directs the two with ample injections of commedia dell’arte, vaudeville and burlesque. Pantomime, dumb show, mask and puppetry are employed, along with speaking and choral speaking so compositionally integrated that they could have been germane, or have been borrowed by any number of performance traditions. These ample resources do much to lighten the load of an evening that includes the character of Death, imprisoned peasants, and blatantly celebrated misogyny.

While entertaining, the beauty of any of these formats and their indicators lies in meticulous delivery; the movement and speaking need to be so concerted between performers that they look effortless, appearing so easy that an audience member might believe they could run up to the stage and join in on the second chorus. If even one player is off even a fraction of one beat, the smoke and mirrors of the comedy is betrayed. An extra or missing beat can kill the attendant laugh. Sadly, at the performance I saw, it was clear that insufficient rehearsal, not surprising for an opera company undertaking such a highly physicalized endeavor using performers whose first discipline most likely was not movement, kept the comedy from its full potential. Sean T. Cawelti’s work as video and puppet designer must be happily recognized, and then I must leave the reader completely in the dark. On initial inspection, the set looks like COT received change back from their $5; I promise you will be taken in by Cawelti’s work, perfectly in keeping with Mitisek’s concept.

Conductor Francesco Milioto draws the sort of bright, heart-wrenching color from the orchestra for the Ullmann piece that it is easy to both hear and to feel, in the film scores of their artistic compatriots that fled oppression for asylum in America, and turned the music behind the flickers into an equal partner in that artistic dance. In the Orff opera, Milioto’s players enunciate seemingly simplistic oddities as if the music has been assigned to the very best, most-practiced junior-high-school students; the joy in the percussive effects of every section of the orchestra is palpable.

But with all of this largesse, the young singers are the stars of the evening. All sing intelligently, and are possessed of strong technique and unique voices of individual character. Of special note is David Govertsen, whose large, lyric bass-baritone voice, along with his extremely tall stature, make him a natural for the character of Death, which he imbues with both gravitas and a sense of ribaldry. But it is as The Peasant in “The Clever One” that he shows off his growing sense of comfort with his own physicality and the potentials of his ever-progressing vocal prowess by opening the piece with an angry, wild patter that has him throwing himself about the window of his jail cell with almost as great a speed with which he elucidates Orff’s expected repetitive, whirlwind vocal antics.

Joy bounces off tenor Bernard Holcomb like a skylight beacon accidentally aimed at an individual instead of a cloud, and even when playing a sad moment, the pleasure he draws from his art is always bracing. Andrew Wilkowske as the two rulers brings a theater sensibility along with a masculine presence to his roles, and warms them in an easy, spinning baritone, and as the sopranos Emily Birsan delights with a rounded tone that glides effortlessly into the stratosphere. I took particular pleasure in hearing William Dwyer, whose ardent tenor graced the role of The Soldier in Ullmann’s opera, make himself the comic master of his instrument when, as one of the mechanicals in the Orff piece, he drunkenly attempted to imitate the morning cock’s crow. (Aaron Hunt)