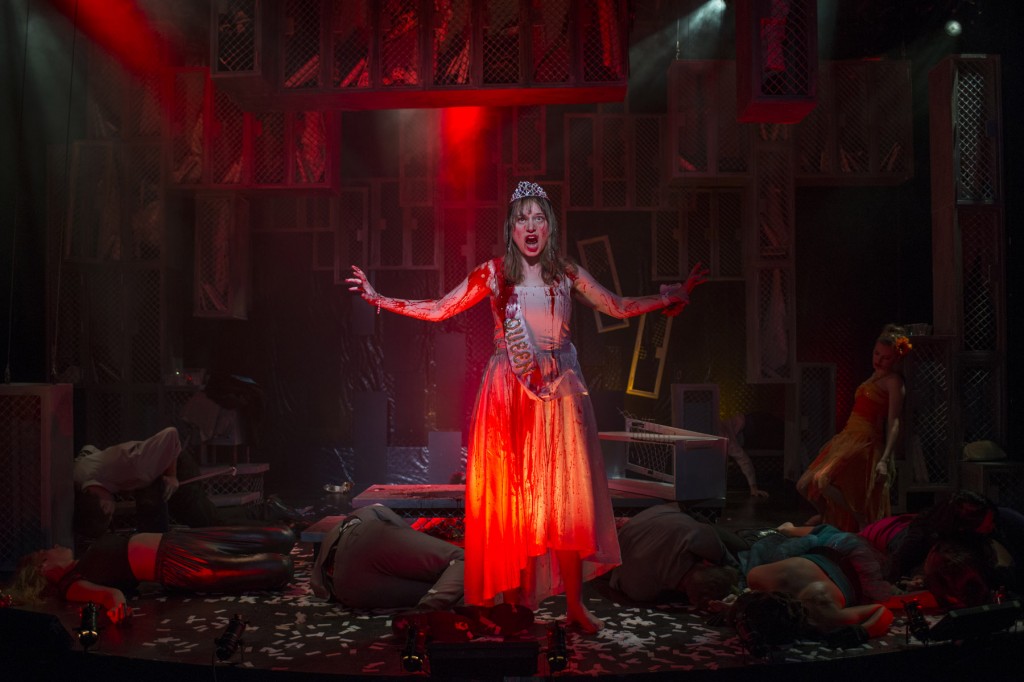 Mention to any fan of the American musical theater the musicalization of Stephen King’s novel “Carrie” and I guarantee you will enjoy a visceral response; anything from the lift of an eyebrow to a physical readjustment of the entire body-frame will indicate their awareness of, and feelings regarding, the Michael Gore/Dean Pitchford/Lawrence D. Cohen show. A little background: according to The Huffington Post, “Carrie” closed in 1988 “after five regular performances, lost $8 million and became the most expensive flop in Broadway history at the time.” The reverential mounting by Bailiwick Chicago belies the piece’s subsequent camp-cult status. Aside from a few laughers, the audience took the show quite seriously on the night I saw it.

However, director Michael Driscoll and his production team did not lift it from its prom-night blood and ashes. Hampered by a pop-rock score that offers mediocre melodies with the occasional musical hook, repeated without reinstatement or change in meter, key, or even lyrics, and a book that can’t decide whether it is telling the story of a family-life gone horribly awry or a high-school experience rife with interpersonal dreadfulness and finding itself unable to tell the two stories at the same time (the success of which might have saved the entire debacle), only solid delivery can save this show. How can a story resonate with an audience engaged in a discussion of bullying and gun control, where the bullied telekinetically murders both her foes and her allies, knifing the audience anew with never-to-be-erased pictures of schoolchildren dead from high-powered weapons? Carrie herself mentions desiring vengeance in her first musical moment, losing potential sympathy, and the character of her friend Sue is insufficiently highlighted at the top of the piece, and then over-studied in Act II; at first we miss her as the Everyman she might portray, as our window in, and later we wish she would shut up about her boyfriend so we could get to the prom.

The majority of the singing here is unconscionable. While it is perfectly true that this style of pop-rock requires speak-singing and a ringing belt, that belt must move into a controlled vibrato both to relieve the tension on the vocal chords that is there, regardless of the level of vocal technique and talent on display, and to give the character, and therefore the audience, release. We are still dealing with the Broadway musical form here, live singing, not something mixed in the studio, later to be lip-synched. Loud, unmixed straight-tone singing will not win the day; the audience should never be afraid for the longevity of a performer’s gift.  Five years earlier with “Baby,” Maltby & Shire lit the way; same style, safe delivery. Only in Kate Garassino’s gym teacher, Katherine L. Condit’s mother, and Ryan Lanning’s double turn as Mr. Stephens and Reverend Bliss did I see and hear performances equal to the level of this company’s reputation.  (Aaron Hunt)

Aaron – your review includes great verbiage – but misses the mark in casting a reliable review. This production is the one Stephen King should see. King would appreciate the transformation from his literary medium, not bowdlerized in its emotional fervor, to a visual and audible repertoire that resonates with tangible feeling! Callie Johnson and Katherine Condit are sensational – perfect. Their relationship is raw and manic – but so well done. The entire cast brings the story off the page and onto the stage. Well done – a must see.