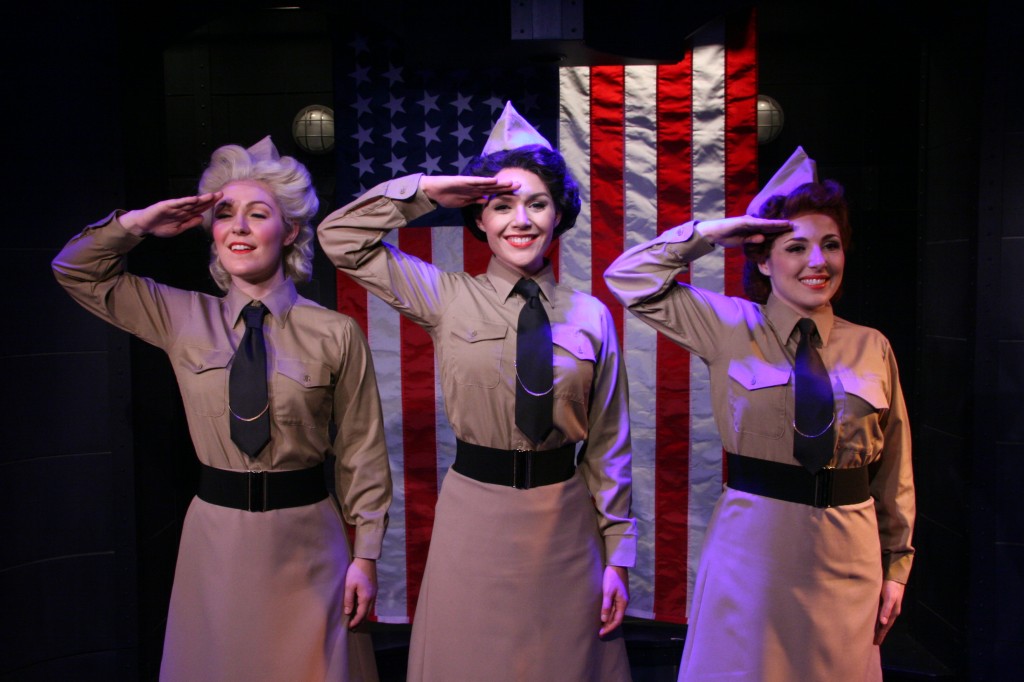 Few things incite feelings of patriotism in the average American like USO shows and the performing of staple military ballads like “Anchors Aweigh” and “Marines’ Hymn.” Arguably, no one sang the aforementioned tunes to soldiers of the World War II era in a more delightful way than the Andrews Sisters. It is their charismatic and cheerful tone that the performers at Theo Ubique Cabaret Theatre aim to exude in “A Musical Tribute to the Andrews Sisters.”

Sarah Larson, Casi Maggio and Jordan Yentz emulate the Andrews Sisters three-part harmonies, channeling the 1940s charm that the trio was known for through both acts, while the ensemble plays to the audience and evokes memories of days gone by with their poise and vocal stylings.

For the first act, the audience is aboard the “USS Anywhere,” which is fitting, since that’s where USO shows were originally performed: anywhere performers could find an audience and set up a makeshift stage. According to the show’s emcee and male vocalist (William Lucas), the purpose of USO shows, like the one being presented, is to “remind the boys of what they’re missing back home.” The second act makes a transition from USO performance to cabaret. American flag centerpieces are replaced with tea lights at each of the floor tables and the cast goes from wearing military-style garb to evening gowns and jazz-inspired costumes, designed by Bill Morey. Likewise, there is a shift in the music, from mostly patriotic to numbers by some of the greatest American songwriters, including George and Ira Gershwin, Cole Porter and Harold Arlen.

The show, directed and choreographed by David Heimann, was conceived in conjunction with Fred Anzevino. The music is wonderfully arranged by Aaron Benham and directed by Alex Newkirk, which is essential since this show is more like a concert than a theatrical production. There is very little dialogue or chit-chat with the audience, but given that the Andrews Sisters recorded more than 700 songs—over 100 of which hit the Billboard top 30 (forty-six reached the top ten)—it is evident that the show’s creative team wanted to stick as much music in this show as they reasonably could.

Older audiences will enjoy classics like “Don’t Fence Me In,” “In the Mood” and the “Armed Forces Salute,” which includes “The Caisson Song.” However, audiences of any age can appreciate this show, which is truly a delightful tribute to the first all-female group to have a record go platinum. (Mary Kroeck)