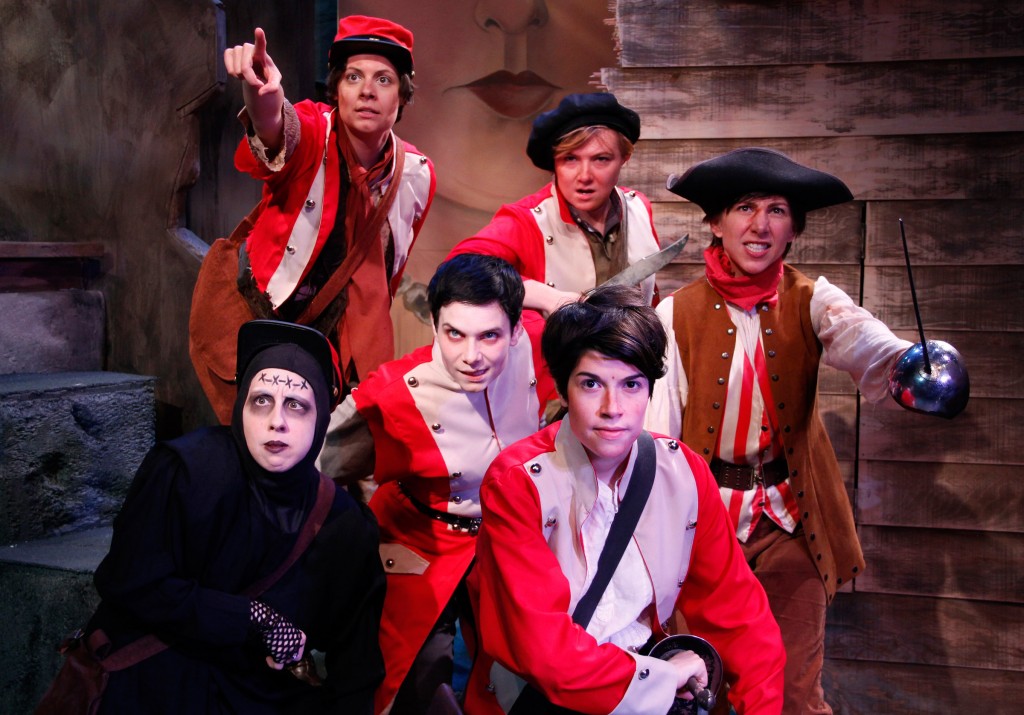 You might think being a rock troll, a vampire, a werewolf or a hunch-backed “Igor” would disqualify hopeful enlistees from military service. But in the fictional land of Borogravia, it’s just their gender that the unlikely female recruits of “Monstrous Regiment” are compelled to hide.

I was not familiar with the Terry Pratchett source novel when I took the assignment to review Chris Hainsworth’s adaptation of this satirical war tale, nor did I have the time to read the preceding thirty books in Pratchett’s “Discworld” series. So, from a fan angle perhaps, I entered Lifeline Theatre about as ill-prepared for what I was about to see as these characters are for battle. But while a Discworld devotee might glean additional pleasure seeing Pratchett’s work brought to life, I quickly recognized that the targets of the humor are universal, the show’s aim is decidedly true, and there’s nothing to keep the uninitiated from thoroughly enjoying this delightful production.

In the service of an unseen, frequently referenced, likely deceased Duchess and driven by a disparate set of personal motivations the young women—disguised as lads—sign up for a Borogravian army which has seemingly exhausted its supply of eligible males. Much of the comedy comes from the obviousness of the gender deception (though one can never be sure with a vampire, they’re just androgynous by nature…). Similarly the determination of these soldiers to overcome strictures of femininity and defy accepted societal roles lends the show much of its emotional resonance.

Director Kevin Theis orchestrates the flow of physical comedy and the delivery of the frequently funny dialogue impeccably. Timing, that essential key to comedy in fictional lands on the Disc and right here on planet Earth, is spot-on from start to finish. The sci-fi and fantastical elements work in service of the script’s main focus on providing commentary on war and social injustice while delivering laughs. Along with the ample jokes, there are occasional tender moments. The entire cast is crisp and undeniably likable. Among the oddball assemblage of gals-posing-as-lads, Sarah Price shines as our main hero Polly, a novice like the others but a born leader who initiates her plans by effortlessly convincing her laughably confident superior Lt. Blouse (Robert Kauzlaric) that he’s the originator of Polly’s tactics. Katie McLean Hainsworth is hilarious as a member of a race of Frankenstein’s assistants known as Igors. Michaela Petro is alternately aloof and seething as Maladict, a vampire with the self-discipline to substitute a steady stream of coffee for the traditional beverage of human blood. Justine C. Turner lumbers comically (both physically and verbally) under Emily McConnell’s wonderfully designed costume for Carborundum, a thick-skulled and thick-skinned troll. And Christopher M. Walsh is solid as the war-weary, gutsy Sgt. Jackrum under whom they all serve.

The Woman Power message is driven home a bit too bluntly and repetitively near the end of this nearly two-and-a-half-hour show, but otherwise “Monstrous Regiment” moves along briskly. The strength of the cast is itself an argument for gender equality as the women and the men in this winning production are all worthy of commendation. (Raymond Rehayem)