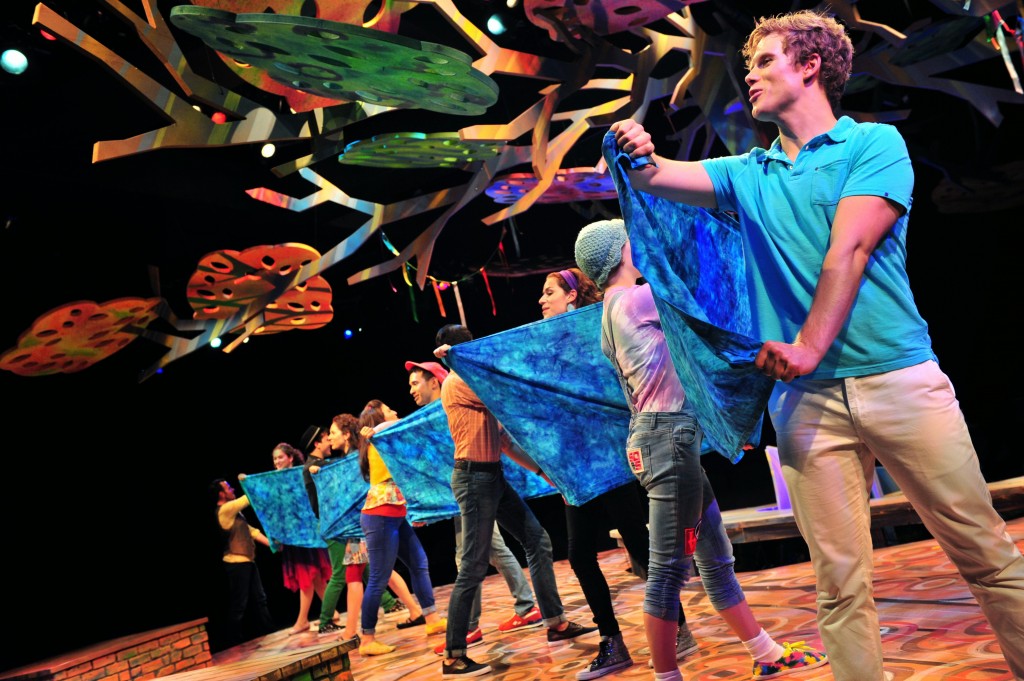 Those of an age to recall the 1971 version of the John-Michael Tebelak/Stephen Schwartz musical “Godspell” are in for some surprises while enjoying the 2012 revised version on stage at Lincolnshire’s Marriott Theatre. A score that, with one exception, fell on the ears as more folky-than-rocky, with gentle, repeating phrases that could lull an audience into a contemplative spell, coupled with a book that suggested youthful players swept up into the world of a Christ-figure teaching truths born of ancient doctrines, capable of firing the imagination and shaping the morals of the cast and the audience as well, tells the same story in director Matt Raftery’s production, albeit with a definite twenty-first-century sensibility.

From the top of the show, the company is introduced in the musically complicated, complex prologue—a Tower of Babel argued by philosophers—as contemporary business people dressed for Wall Street and arguing endlessly in a world of constant-contact; the moment the first cellphone appears, there can be no confusion that the cast is adult, and that they are us. Although the office attire is stripped away, revealing underdressed costumes that vacillate between the flower-children concept so often attributed to the show and the clown notion more in keeping with the original production, I found it difficult to accept them as innocents. The revised score suffers more electrically charged orchestration and more intricate vocal harmonies. Most disconcertingly, musical director Ryan T. Nelson’s singers offer vocal riffs that occur so soon after the first statement of a song that the melody can be obscured. The song “Beautiful City,” written for the 1972 film version and included in this updated version, offers no new information while slowing the plot’s trajectory to the expected finish. And for those of us accustomed to seeing some of the finest dancing anywhere in Marriott Theatre productions, this “Godspell” is devoid of any movement that most audience members would consider dance. 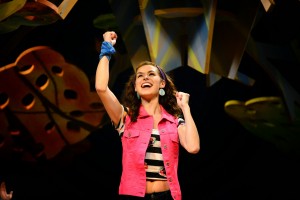 And yet, despite the switcheroos that left me missing my misty seventies, I sat surrounded by a sea of people—mostly unknown to each other, coming to the theater from very different types of days, with their own physical and fiscal aches and pains—turned into a congregation as the ten performers on the Marriott stage found each other, and fell in love—with each other and with the resonance of parables of love and acceptance. Shorn of fire and brimstone, and fired with compassion and acceptance, the message of this piece will turn any room of strangers into disciples.

Christine Mild was a wonder to watch, with a voice that can sing the entire piano. Lillie Cummings sang a plaintive “Day By Day,” and Samantha Pauly comically vamped her way through the vocally challenging “Turn Back, O Man” with aplomb. Devin DeSantis charmed as John, and made us cry for him as an entrapped Judas. Brian Bohr, a blond choirboy in a sky-blue polo shirt, gave a Jesus awash in joy, and then drowned in responsibility. Tom Vendafreddo’s pliant tenor melted us with “All Good Gifts,” and his on-stage keyboards delighted the parishioners both onstage and off.  (Aaron Hunt)