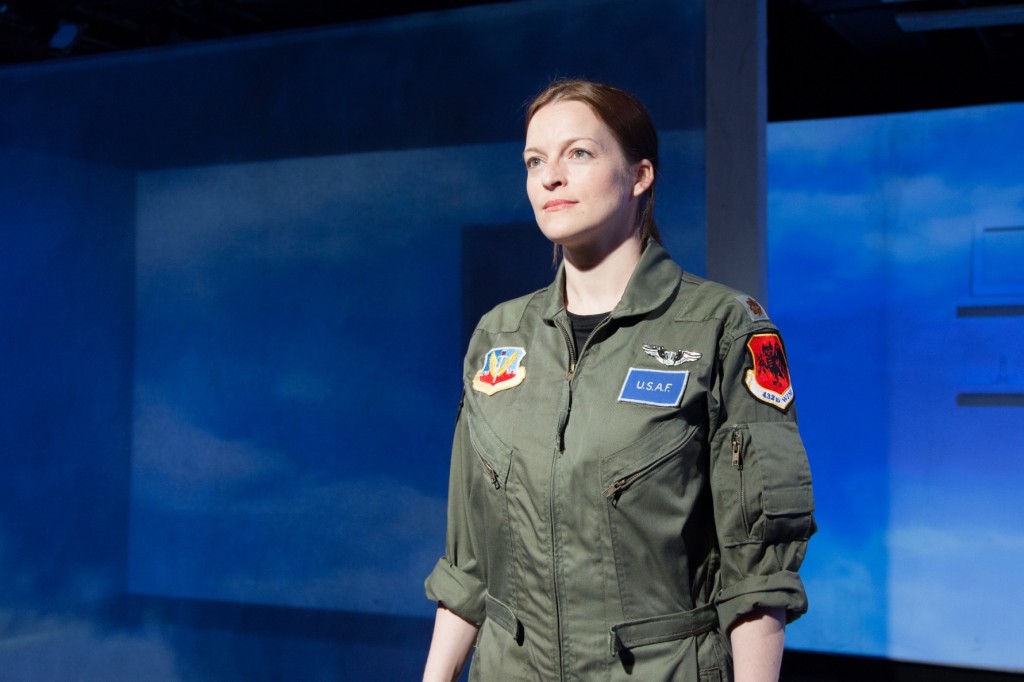 In a recent commencement speech given to Dartmouth College’s graduating class, award-winning writer, director and producer Shonda Rhimes addressed the question she is most often asked: “How do you do it all?” In a moment of raw honesty Rhimes offered the Class of 2014 these words:

“The answer is this: I don’t. Whenever you see me somewhere succeeding in one area of my life, that almost certainly means I am failing in another area of my life. If I am killing it on a ‘Scandal’ script for work, I am probably missing bath and story time at home… If I am at my daughter’s debut in her school musical, I am missing Sandra Oh’s last scene ever being filmed at ‘Grey’s Anatomy’… That is the Faustian bargain one makes with the devil that comes with being a powerful working woman, who is also a powerful mother.”

This Faustian bargain Rhimes speaks of is precisely the conflict that the protagonist in George Brant’s one-person play “Grounded” faces.

A nameless hot-rod F16 fighter pilot (Gwendolyn Whiteside) has worked her entire life to garner the prestige that comes along with her uniform. Unfortunately that pride is short-lived when she becomes unexpectedly pregnant. In what she sees as a punishment for becoming pregnant, she is ripped from the blue sky and repurposed to a colorless world of gray in a trailer outside of Vegas. There, for twelve-hour shifts, she flies remote-controlled drones in Afghanistan. Throughout this journey however, “The Pilot” learns more about war and herself than she ever imagined.

For seventy minutes, Whiteside is a one-woman powerhouse. She plays the role of “The Pilot” with such charisma and emotional complexity that any military mom would be proud she was the vessel chosen to tell their story.

“Grounded” is an exceptional homage to military mothers everywhere, dealing with the complexities of both life and war. (Loy Webb)