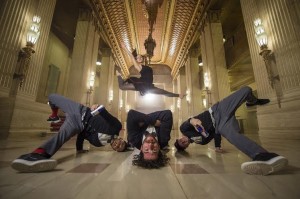 When it comes to courting crossover audiences, one most often sees dance companies trying to convince mass audiences that the art form isn’t just for the champagne-sipping opera-house set. In this case, the Berlin-based Flying Steps crew is showing opera-house season-ticket holders that breaking is an art form as worthy of attention from the butts in the red velour seats as the circle standing on the corner. In a world tour funded (handsomely, I’d judge from the preponderance of advertising on billboards, bus stops and internet ads) by Red Bull, the world champion b-boys (along with one cheeky ballet dancer from Sweden) pop and lock to Bach’s “Well-Tempered Clavier,” performed live by Christoph Hagel—a former student of Leonard Bernstein—in major concert venues around the world. The first and only stop in the U.S. will be at the Civic Opera House the last two weekends of June. Perhaps this high-profile marriage of classical and contemporary will spark curiosity in a whole new crowd for the vibrant street dance scene in our own city. (Sharon Hoyer)