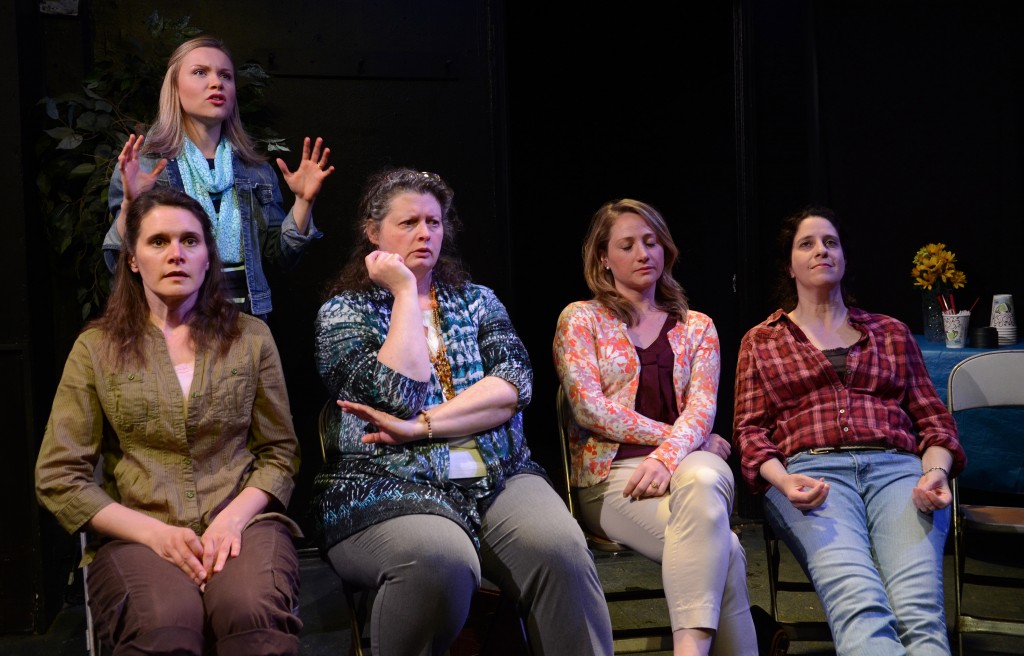 I’ll take the plunge and just say it: everyone’s got a sinking feeling in this play about military wives of submariners. There’s an encounter group full of them who meet at a submarine history museum. They vent about their jobs, complain about the people they meet, long for their husbands and occasionally cough up the true confession. Aside from the new girl (Amanda Lipinski), not one of them has a buoyant soul. They’re all quite desolate and looking to place the blame on just about anyone other than their husbands who are off serving the USA.

Elsewhere, their fellow sufferer Rebecca (Meg Elliot)—who is willing to place the blame on her absent spouse—languishes in her bathroom while penning missives to long dead Confederate Horace Hunley (Nate White), underwater pioneer and developer of early hand-powered submarines. Arriving to alleviate some of Rebecca’s misery—though in occasionally aggressive, angry tones—the Hunley character is the comic relief for the bathroom scenes. While across town—and across the well-utilized small stage of Side Project—the women in the support group get some laughs even at their most dour moments, their Prisoner of Woe pal Rebecca isn’t the slightest bit humorous. The tub in which she wallows may not have a drop in it, but she’s fully submerged in a murky swamp of self-pity and delusion from the moment we meet her. If she had any more self-awareness, she’d recognize Hunley’s appearance as her chance to either finally drown or instead come up for air. Lacking any such perspective, she needs a concerned visit from the other ladies to actually see what’s going on in and around her. It’s interesting that these women are all put upon by the patriotic endeavors of their Naval hubbies but the only military man they or we see or hear from is a traitor trying to save the day. Interesting, but wholly unaddressed or even remarked upon.

The performances in this pleasantly absurd dramedy are strong and the direction ably moves the action between Rebecca’s bathroom, the conference room where the other ladies meet at the museum, the car in which nervous Kate (Julia Daubert) drives the new gal, and the bedroom where Kate—nearly as delusional as Rebecca in this regard—spoons with a casually manipulative hairdresser (Mike Shields) with whom she imagines she’s having an affair. There’s also a subplot involving learning Japanese in a desperate attempt to redefine meaning.


A lot takes place in the tight confines of “Hello Failure” and a good deal of it is entertaining and thoughtful. But Kristen Kosmas’ thoughtful script falters in providing nothing to like about lead character Rebecca and yet very little to bother disliking about her. She’s self-pitying, unwell and unsympathetic; she seems merely a vessel for Hunley’s bemused and amusing return. The play ends as it starts, with the ladies looking to shift the focus away from themselves—this time not onto unseen other players but onto the audience. Somewhat confrontational and somewhat maudlin, the conclusion lacks the levity that helps keep the more engaging parts of the show afloat. (Raymond Rehayem)