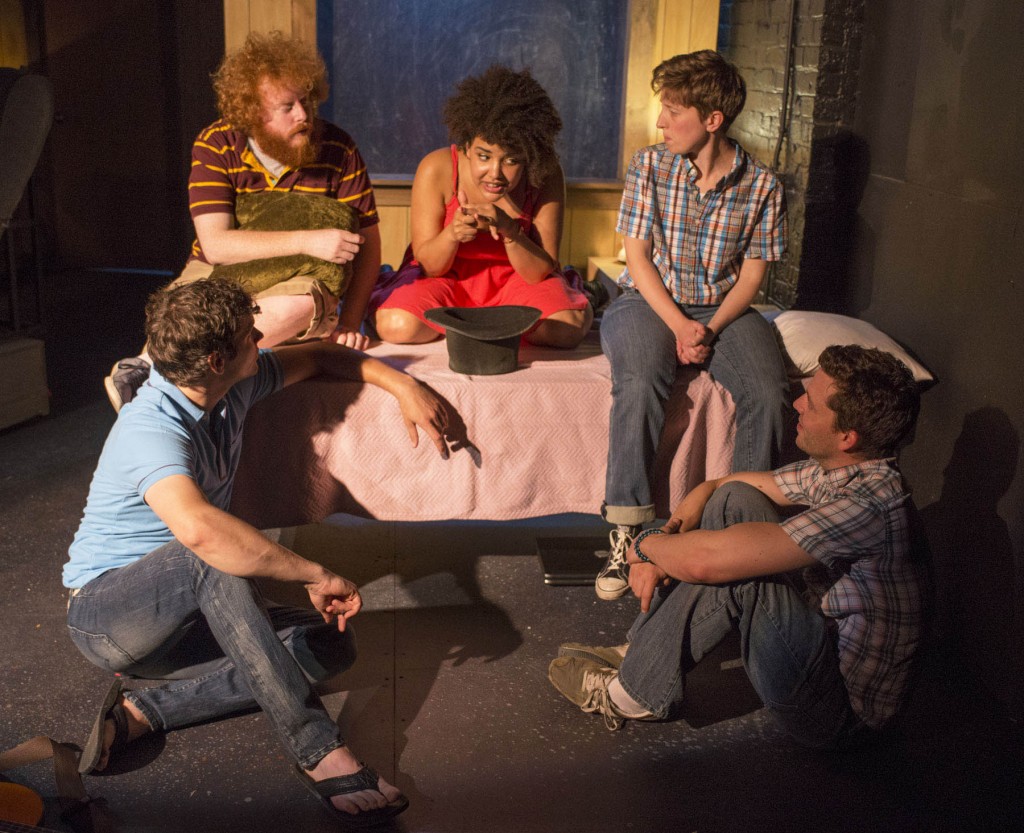 Co-artistic director of The New Colony Andrew Hobgood, who directed “Orville and Wilbur Did It!” comments on the type of creative progression that affords this work its charm at the same time as it creates plot and tonal challenges that are yet to be surmounted for the piece to reach its potential: “When we founded the company in 2008, our hope was to reach a point where playwrights from across the country would bring their ideas to Chicago to develop under the New Colony Process.” Playwright David Zellnik chimes in, “I love working the New Colony way. I had the idea for this play years ago but it was… the so-funny-my-cheeks-hurt days of structured improvs that really made the play come alive.”

The cast of Alex Grelle, Evan Linder, Jessica London-Shields, Morgan McNaught, Josh Odor, Joey Romaine and Kevin Stangler easily prove the point that dialogue born of director-led improvisation yields a rhythm and vocabulary unique to the actors involved, making for perhaps the most realistic delivery and timing possible. For this very reason many actors choose to paraphrase a playwright’s words, believing that breaking the author’s general notions down into words that they-the-actor might use, in combination and meter closest to their individual emotional and intellectual gait, will translate to the audience, producers and critics as true-to-life. The players here have created characters so grounded physically, emotionally and vocally that they inhabit the required skins with the utmost ease. And clearly the improvisation-workshop preparation for the piece made for riotous good fun. The actors know each other well enough to trust and be playful, and on opening night the audience roared at the comedy on the outside as much as the cast was guffawing on the inside. For silly, boisterous, sketch-like comedy, a good time was had by all.

But the rub is that “Orville and Wilbur Did It!” is promoted as a play, and not a sketch, or even a series of related sketches, and this switches up the requirements for an evening’s entertainment. In this particular case, either playwright Zellnik chose to go the route of plot development, or the actors found themselves on a story-telling road during exercises that resonated with a substantial number of the artistic crew involved in the project. And here things go awry. An audience who had laughed uproariously at everything from pot-humor to potty-humor was asked to transition suddenly to dying relationships, sudden trips to jail and hurtful sexual fumblings. Most troubling of all, this story of children’s theater actors, crossing the country on a bus tour of a musical about the boys often credited for sending us into flight, turned against their product and, in a moment of rage, robbed children of a true and honest story. Audience laughter which had begun to float away vanished in a cloud of lost-sympathy. (Aaron Hunt)