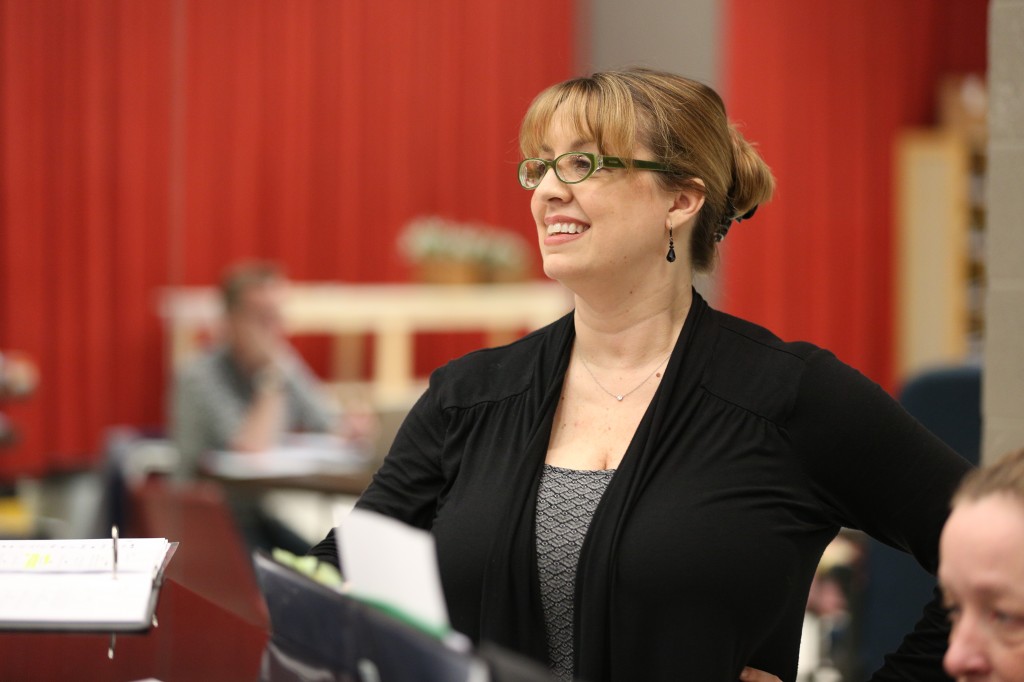 Rachel Rockwell in rehearsal for “Brigadoon”/Photo

Director and choreographer Rachel Rockwell seems to be the lady with the golden touch, the one with an uncanny talent for taking old classic shows that you thought you knew and giving them an entirely new luster.

Recognition for Rockwell’s extraordinary body of work via a run of musical theater successes at suburban venues such as Drury Lane Oakbrook, Marriott Theatre and Paramount Theatre is the milestone of Rockwell making her downtown directing debut at Goodman Theatre.

“It feels really good,” says Rockwell on a lunch break from rehearsals for “Brigadoon” at Goodman, “and it’s not lost on me at all what a big deal this is. I never worked at the Goodman when I was an actor and I always wanted to. And here I am!” she says with a genuine enthusiasm tempered with a charming humility.

“My Mom worked here,” Rockwell continues. “She was the Oracle in Mary Zimmerman’s ‘Pericles.’ The other thing I am so proud of is that the Playbill will be filled with names that will say, ‘making their Goodman debut.’ Almost every name. These are some of the finest musical theater talents in the city of Chicago who never get to work in their own theater district! That to me, is a real coup, that all of these brilliant people are doing a musical at the Goodman in this theater district for the first time, and we’re all doing this together!”

Was there ever pressure for Rockwell to use name performers in the show? “We went through a period of time where it looked like it might be names,” she admits, “so I’m so happy that we came back to the people who are going to tell the story the way I want it told. You never know if you will be able to get what you need out of somebody you don’t know, especially in this short of time. You’ve got to meet, fall in love and get married really fast as a director and an actor, to get the kind of deep work that is needed.

“The history that I have with these people is so invaluable in this process. We already have a strong sense of trust in one another: they know what I expect, they know how I work, and they will allow me to demand things of them because they know I will walk with them. That trust has been earned over a long time and we don’t have to speed date our way into a relationship!” 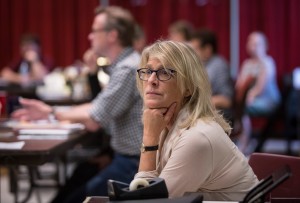 Liza Lerner in rehearsal for “Brigadoon”

It was no less than Liza Lerner, daughter of lyricist and librettist Alan Jay Lerner, who let Goodman know that “Brigadoon” with Rockwell was available. “How cool is that?” admits Rockwell. “Liza had started this project years ago and had a workshop but it didn’t come to fruition. Years later she was looking to begin it again and unbeknownst to me, I was recommended to her! We met at a little wine bar and started talking about the piece and ideas. ‘Brigadoon’ was not a piece that was ever on my radar apart from the fact that it has potential for tremendous choreography, the kind that I love to do. By the end of the meeting, she was like, ‘So, what do you think?’ ‘I don’t know, what are you asking?’ ‘Do you want to work on “Brigadoon?”’ So I’m walking back over the bridge to my car and I called my husband and said, ‘I think I just got “Brigadoon!” ’ It was all so random and awesome.”

Venues across the country were considered. “We were looking for a home for it for a while but we wanted to make sure it was going to the right home, because that can kill a project before it even begins,” says Rockwell, who admits that her usual area venues were never considered because “it felt like it needed to be in a slightly larger place.”

Curiously, Goodman had contacted Rockwell “about a year earlier and said, ‘We really want you here, but we don’t have a project for you right now.’ ‘All right, great, one will materialize.’ And indeed it did, right out of the fog! Liza called them and said, ‘We have “Brigadoon,” do you want it?’ They had just lost a show that was a musical and they said, ‘Yes, bring it along!’ ”

One of the reasons that Liza Lerner had wanted to revisit “Brigadoon” is because despite the show’s great success initially—which popularized the team of Lerner & Loewe who would go on to write such blockbuster shows as “My Fair Lady” and “Camelot”—it is not done with the same regularity as other works in their canon.

“Everybody says, ‘I love “Brigadoon,” says Rockwell. “But what they remember is the score and little about what gets you from point A to point B. I mean, the score is arguably one of the finest scores ever done for a musical: it’s glorious. Some of those ballads will tear you in half. We were trying to figure that out how to bring a balance back to the work without taking it too far away from what people think they remember about it.

“For me, it was about strengthening the rules of engagement, the fairytale logic and giving it a historical context. It always felt like a play about Scotland with very little Scotland in it, more like Disney Scotland, Scotland in Epcot. We wanted to give it more of a historical context. Mercifully, when I googled 1746 Scotland, it’s the year of one of the biggest battles in Scottish history, the Battle of Culloden. It was so fortuitous that that was when this work was taking place.

“Essentially, it was the disbanding of the clan system in Scotland and the identities of the people were forever changed. They were trying to assimilate, but essentially it was ethnic cleansing. There was retribution for anyone who fought in the Battle of Culloden so they went into all the villages and pulled out anyone whom they suspected of being involved in this conflict and either killed them, or drove them off their land and forbade them to wear their Highland dress, punishable by prison. You were no longer allowed to wear your kilt or any of the things that went along with Highland dress, no weapons of any kind.

“There’s debate about whether or not bagpipes were forbidden—they were so hypnotic that it lulled the opposition into submission so that they couldn’t fight properly. They were really just sour grapes about what great warriors the Scots were and wanted to make sure that they couldn’t do it again, that they could never rise up again. They had been inches from reclaiming the English throne. They got misinformation from a traitor and they turned back. They were right there and the French were almost there to help them.

“So there is a lovely parallel with all of these men just returning from WWII having just gone through a similar situation on a more global scale. The fact that the people of Brigadoon are fighting so hard to preserve their individuality and their right to express themselves and differentiate themselves by clan and the soldiers coming back who never wanted to ever be extraordinary again. They wanted to live in their little house with their picket fence with their kids and drink highballs and never be extraordinary again. It’s a parallel we explore without burdening the piece, because it needs to stay light. But there needs to be something to fight for or there is no real conflict and it makes for a pretty predictable evening.”

Had Rockwell ever done the original version of “Brigadoon?” “No, but I came close a couple of times. The fact that I never had is odd, that I never played Meg Brockie is astonishing to me. I never danced it either. I was obsessed with the movie as were all young ballerinas, that’s all we watched. And then you realize that has nothing to do with “Brigadoon” as a musical, or very little, anyway. Now, I go back and watch it and think, ‘Wow, that’s a lot of plaid!’”

Nonetheless, given Rockwell’s reputation for blunting structural weaknesses of pieces that she works on, would she have felt a need to have the book rewritten if that had not been asked? “I do enjoy the challenge of solving problems and dealing with a work as it is,” says Rockwell, “but I don’t get an opportunity like this very often, especially on this scale. We’ve tried to be really purposeful and make sure that every single line serves the journey. It’s never about how clever the writing is, but how does this get us to the emotional arc of this scene, which in turn gets us to the emotional arc of the play?

“When you look at it now, the stakes are so much higher than ‘Oklahoma!’ It has the same kind of appeal, the dancing conceits are similar, the scores are both lush and lovely. But now, there is a lot more at stake in the play, which I think is good. This is a village that appears for one day every one hundred years so it is never touched by any one century for long enough to change it. No one can leave or the village disappears forever. One person can change the fate of every single person in the village! The only way someone could stay is if they truly love someone in Brigadoon with a pure heart and no fear and no doubt. That’s a tall order for someone in love because we enter into all of our relationships with fear and doubt, especially now, when we rarely even relate to one another, it’s all internet.

“I mean, what would you do if you only had eighteen hours to be alive every one hundred years? And as you sleep, you hear the pain of the outside world in your consciousness and know that you are blessed because you are avoiding that. You wake up and live and love as hard as you can for eighteen hours and then you go to sleep again. The stakes are quite high!”