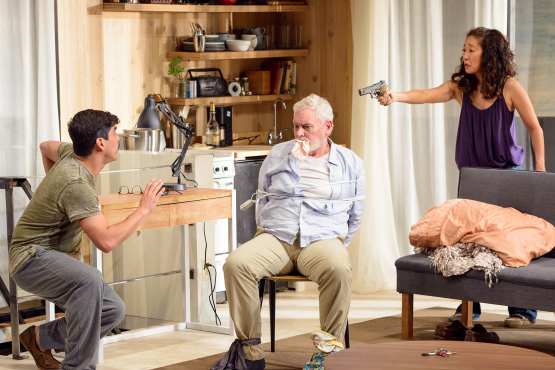 A not terribly interesting play about terribly important issues, “Death And The Maiden”—as seen in the current production at Victory Gardens—is most notable for a star turn courtesy of Sandra Oh and a set that turns courtesy of scenic designer William Boles.

The story starts with a bit of courtesy. Political cog Gerardo Escobar (Raúl Castillo) arrives home after a stranger assists him with a flat tire. When the stranger, Dr. Roberto Miranda (John Judd) arrives for an unannounced visit we soon discover that he may be horribly responsible for Escobar’s wife’s fragile mental health, a fragility Gerardo handles with repugnant condescension. The wife, Paulina (Oh) is certain that Miranda is the doctor who attended and increasingly orchestrated her torture during their unnamed country’s hideous recent past.

In the stiltedly expository opening, we learn both Escobars have no real faith in the new government’s truth commission, which Gerardo has agreed to join. So we’re not surprised when Paulina takes justice into her own hands, hands with which she carelessly waves a gun within potentially disarming reach of her husband, who verbally objects to her tactics but does nothing to stop her. With her supposed fragility instantly vanquished by the opportunity for vengeance, Paulina dictates the action for the only truly engaging parts of the show. She turns the tables on her presumed victimizer, tying him up, threatening, beating him a bit, all the while trying to convince both the doctor and her disbelieving, duplicitous spouse that a confession from her alleged abuser is the only way out of this escalating predicament.

Though the script seems to believe it leaves the question of the doctor’s guilt open to debate, there are at least a couple of clues that make it seem utterly unlikely Paulina is terrorizing an innocent man. It becomes clear that any final resolution will be left to the audience’s imagination far more than the truth of the doctor’s identity.

With his slick hair and placating posture, Castillo looks the part of opposition hero turned political tool. His delivery is often unconvincing but that fault largely rests with the dialogue, which is neither natural nor poetic—particularly in the case of Gerardo’s lines. Oh’s performance is strong—at times gripping—stepping up to the spotlight that’s on her. She’s best during the scenes where she’s got the doctor by the balls, unsurprising as these are the play’s most dramatic moments; Judd is quite believable as Miranda, whether he’s trying to procure information on the commission from Gerardo or plead with Paulina for his life.

The spinning set is effective, if distractingly noisy when rotating. It allows us to view the Escobar home from within and without, a terrace serving as sanctuary for the married couple and the indoors serving as a prison for the whole trio, regardless of who’s tied to the interrogation chair.

Ariel Dorfman’s script has been much lauded in the decades since its debut. But while it deals with monumental matters of responsibility, complicity, forgiveness, justice, victimization, duty and honesty, its language is so prosaic and airless I found the post-show discussion on these topics more illuminating, provocative and moving than the play itself. There are moments of dark humor that stand out as the show’s freshest writing, but they are too few to ever bring me to another staging of this examination of the horrors of home and homeland. (Raymond Rehayem)