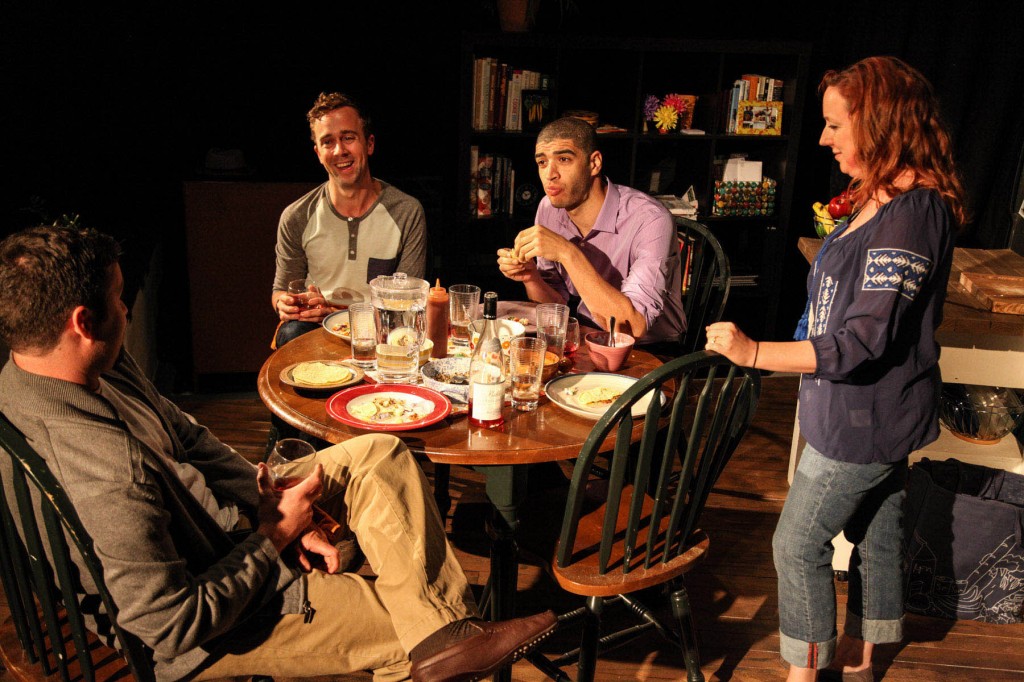 Waiting for LiveWire Chicago’s production of “Partners” to begin, my date and I talked about how much we would like an apartment that resembled Mike Mroch’s elegantly shambling set. After the show had ended, we discussed how uncomfortably our lives already resembled those of the show’s characters. For we too are over-educated, over-sensitive and over-indebted young people scraping that glass ceiling of early adulthood. Given what a mess these characters are, the parallels were unsettling.

“Partners” might strike one as a rather bland title for a play (and I’m not saying that it isn’t) but that blandness belies playwright Dorothy Fortenberry’s interest in examining every type of relationship that the word could imply. There is the marriage between Paul (Brian E. Crawford) and Clare (Lauren Pizzi). Then there is the business partnership (a food truck, of course) between Clare and her best friend Ezra (Will Von Vogt). And then there’s Ezra’s relationship with his boyfriend Brady (Blake Russell), a pairing that now comes with the right to marry and all of marriage’s attendant anxieties. As the play begins, the characters are all at a stable, if tenuous, equilibrium. But then Clare suddenly comes into a large sum of money. And when money is introduced into any partnership, things get complicated.

LiveWire’s production varies scene to scene. Von Vogt is a twitchy marvel as Ezra, a lovable loser who fears that his schtick is starting to wear thin. He infuses his scenes with a complex cocktail of charm and neediness and the scenes between him and Russell are especially absorbing. Unfortunately, director Kendra Miller has more difficulty with Clare and Paul’s scenes. The two are grating and dull and lack the intriguing little contradictions that make the moments between Ezra and Brady pop.

However, I think the fault ultimately lies with Fortenberry’s script. For as much as she gets right about millennial anxieties, her narrative clumsiness means the story keeps tripping over itself.  Clare’s windfall literally arrives out of the blue. A physical altercation escalates so quickly and ends so poorly that it beggars belief. But then there are enough winning moments that the show picks itself back up and keeps chugging. By the time Clare makes her big decision in Act II, though, you kind of wish the play had just stayed down. (Alex Huntsberger)