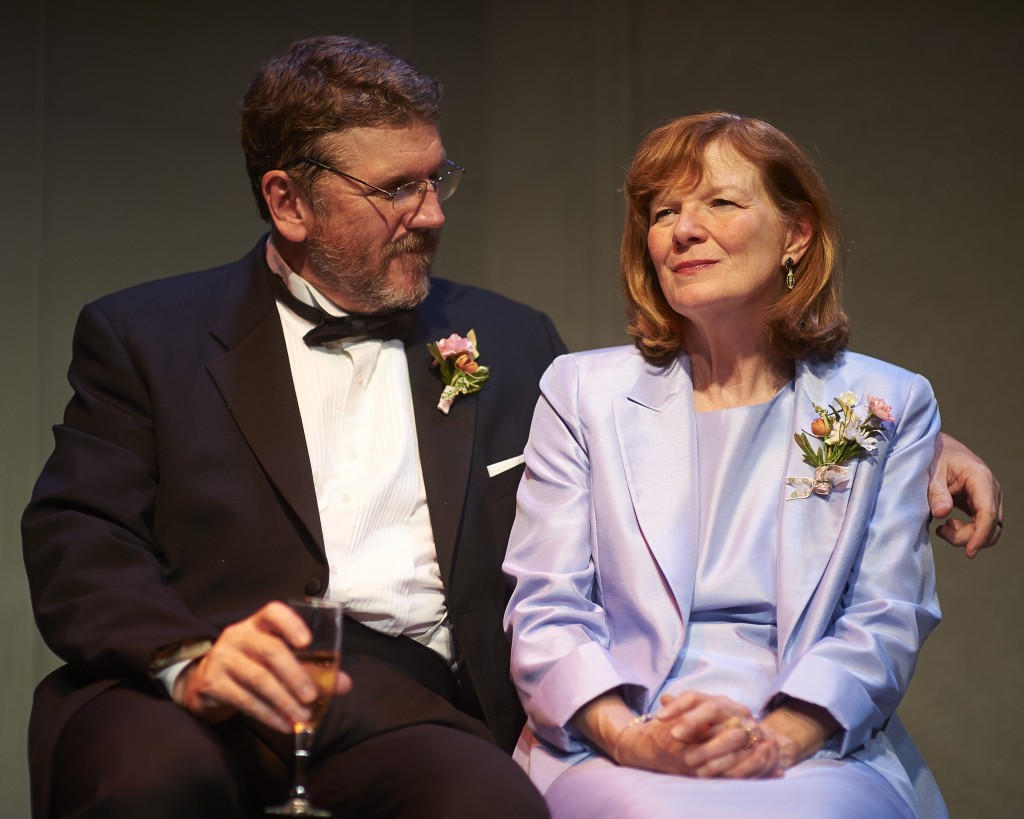 Lacking the spark to start even the most readily extinguishable blaze, “A Small Fire” is monochromatically akin to a handful of ash. The direction from Joanie Schultz is sharp, the sound design by Thomas Dixon is precise, and the cast handle the challenges before them admirably. It’s the material that, striving for the elegiac, feels instead like an obituary in the making. The script attains the sort of mundane conversational tone it aspires to without delivering a believable sense of reality. The worsening condition of the main character is successfully communicated by the aforementioned sound design, wise lighting and blocking choices, and the fine performance of Melissa Riemer in the lead, but the dialogue is distractingly stilted for a play rooted in familial exchange.

At the play’s start, we meet Emily Bridges (Riemer) a brusque, no-nonsense owner of her own business in the traditionally male-dominated construction field. Furthering such unremarked upon exceptions to workplace stereotypes, we later learn her right-hand man Billy (a likable James Allen), isn’t straight. He also races pigeons, in a subplot that feels like an undeveloped metaphor within the underdeveloped metaphor that is Adam Bock’s one-act play. Mr. John Bridges (an effective Robert Koon), Emily’s sensitive husband who appears both more motherly to their daughter and more concerned with the basics of housework and the feelings of others, validates their unlikely union by explaining it saves him from being alone. It’s not a convincing sell to his daughter Jenny (Julia Siple) whose dislike of her cold, judgmental mother grows as her own wedding approaches.

There isn’t initially any reason for the audience to like Emily either, and before we get to know her, Mrs. Bridges is mysteriously struck by a total loss of smell and taste. As if fearing that anosmia (unnamed in the script, but I Googled it) wouldn’t generate much sympathy from the audience—or, perhaps more rewardingly but more appallingly, would generate the kind of cheap jokes Jenny quickly turns to—Bock soon sheds Emily of her sight and then her hearing as well. It’s in this increasingly isolated realm that she becomes softer and more loving, but only to Billy and her husband who already overlooked her coarse demeanor. Her daughter, conversely, is driven further away.

One of the limitations of much non-musical theater, compared to say monster movies or a Jackson Pollock painting (which have their own limitations, of course) is the scarcity of action. It’s mostly a lot of talking. This condition becomes more pronounced when a character is robbed of her ability to perceive her surroundings and the play becomes a descriptive monologue for her doting but frustrated husband. Such a scenario could highlight how this limitation is also a strength, if the language were crisp, revelatory, or otherwise engaging—which it isn’t. With touch the only sense left to Emily, and a need for coupling John’s stated reason for ever being in this marriage, the release afforded by the sexual act with which the play climaxes comes off as merely inevitable, though I suspect it’s supposed to be life-affirming. (Raymond Rehayem)