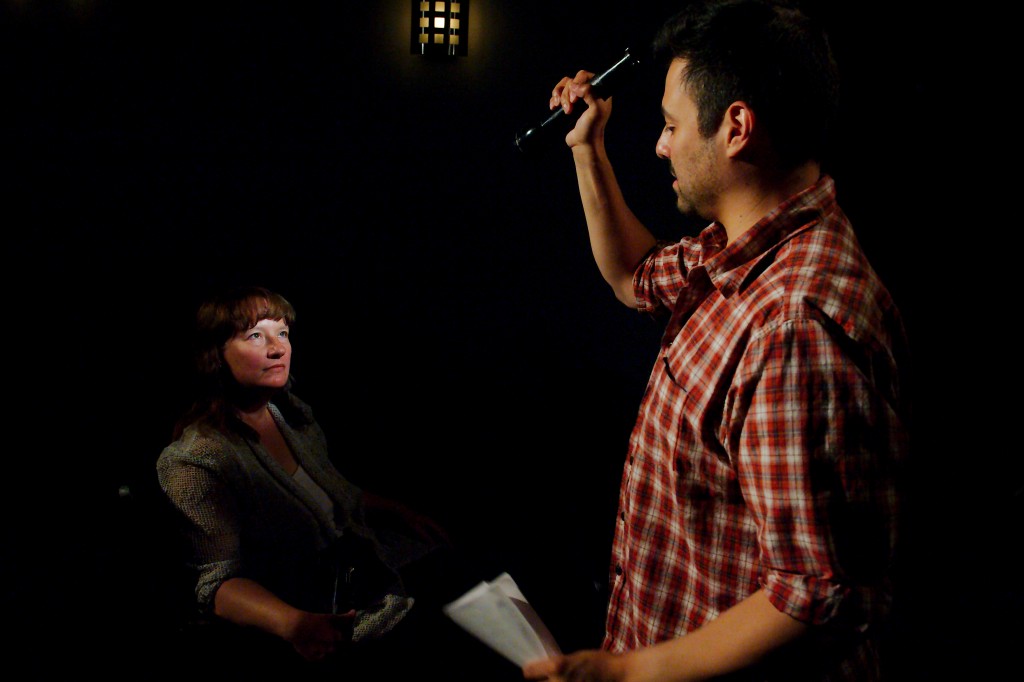 Everyone has an opinion about guns. And everyone has a “gun story.” Whether it’s tragic, a tale of survival or just something from the news, everyone has a story that deals with guns. “The Gun Show, ” directed by Kevin Christopher Fox, at 16th Street Theater explores various stories of one person, playwright EM Lewis, and her complex relationship with these weapons.

In this world premiere, 16th Street Theater artistic associate Juan Francisco Villa recites Lewis’ script exactly as directed in her rules: “1. Never put down the script. 2. Don’t leave anything out. 3. Don’t stop until the end.” It’s not often that a playwright is in the audience at every show to see if these rules are being followed, but in this case, the playwright is also the show’s main character; Villa was chosen to tell her story. There are several moments where a flashlight, like the kind a police officer would use, is turned toward Lewis—to call her out on something or to ask a question. When this happens, she never speaks, only gestures, and after a short amount of time, Villa continues to recite the script.

Though there is a script in hand, “The Gun Show” is unlike traditional theater. Villa acts with full emotion, breaks the fourth wall and relies on the unscripted reactions of Lewis to move the show forward. The give and take between Lewis and Villa is magnetic in a sense, as both need each other to give the show a heightened state of emotion. Because of their interaction, the audience is constantly made aware that Lewis didn’t write a piece of fiction. Her autobiography of guns is being acted out in front of them and the story is human, bold, sometimes funny, sometimes heartbreaking, but always honest.

The set is minimalistic—only a desk, a lamp and a chair adorn the stage. A few picture frames are taken out of a cardboard box from time to time, and an upstage door is slightly cracked open, providing a sliver of light. That ever-so-slight illumination from the doorway is haunting and feels symbolic of finding light at the end of a dark tunnel. Perhaps that is the intention: to imply hope for Lewis that she might eventually be free from her personal tale of passion and grief. Or perhaps it holds a greater significance: to suggest that even though the voices of those on the far left and far right of gun control laws are the voices that are most often noted, those who are in between—the vast majority—might be able to somehow be heard and solutions can be found. Villa clearly recites Lewis’ words, “We have a problem with guns in America. The problem is we really, really like them.” Like them, hate them, or feel somewhere in between, gun control is an issue that has more than one side. With a second act that allows the audience to share their thoughts and stories, this show is fostering a much-needed dialogue. (Mary Kroeck)