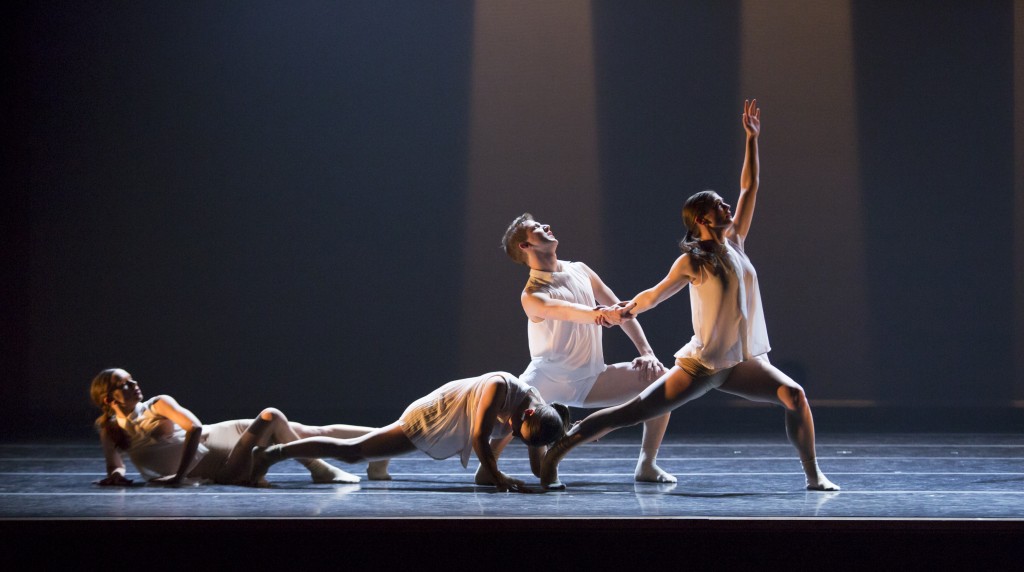 For dancers, summer is a season of creative experimentation and growth, with ample opportunities to participate in residencies and intensive classes both in the city and without. Summer is also the time when a few dance companies become incubators for new choreographic talent within their ranks. Thodos Dance Chicago was among the first in the city to offer budding choreographers in the company the opportunity to practice the craft backed by extensive resources, and to have the resulting works performed on a main stage. Melissa Thodos provides her company members audition and rehearsal space, a budget, a lighting designer and a panel of experts to provide feedback both early in the process and close to the performance. They get a taste of artistic production in the big leagues: auditioning, creating work, running rehearsals, gathering collegial feedback. I sat in on the second panel showing at the Drucker Center and got a glimpse of how seasoned dance professionals nurture and challenge the next generation of artists.

Panel days are long; ten choreographers show their pieces and have a good twenty-to-thirty minutes for feedback. Outside the studio, two long tables overflowed with food and drink to keep the panelists, dancers and guests fueled for a ten-hour day. In the studio, a table was set up opposite the mirrors and flanked by chairs. Behind the table sat four panelists; the other chairs held a shifting cast including the lighting designer, Melissa Thodos, the rehearsal director, Thodos’ PR folks, and guests like me who, judging from their Sunday brunch attire, included a handful of patrons and donors.

This year’s panel was comprised of Margi Cole, artistic director of the Dance COLEctive; Brock Clawson, a Thodos alum whose “Crossing Ashland” was recently performed by the Joffrey Ballet; Jeff Hancock, co-founder of River North Dance and longtime active collaborator with multiple companies around Chicago; and Zac Whittenburg, former dancer with Hubbard Street (amongst others), former dance editor of TimeOut Chicago and now communications manager for Hubbard Street—an observant and articulate critic whose dance writing I’ve followed closely from my first review.

In the hour and a half I spent in the studio, two choreographers showed their work and received input from the panel. The first, John Cartwright, presented a duet marked by spinning lifts set to rolling piano lines; Cartwright drew attention to the flexibility and grace of his female dancer in a fairly traditional male-female contemporary ballet duet. Feedback from the panel was every bit as interesting as watching the work. The panelists took turns complimenting strengths, pointing out specific moments that could use development or where a different choice might strengthen the piece and, most notably, asking Cartwright to question his assumptions. Clearly he’s resisting aspects of traditional ballet, but might he want to question some gender assumptions as well? A suggestion was made that Cartwright ask his dancers to write about their moods and motivations during the piece. Subtle and nuanced aspects of the performance were cited—the cast of each dancer’s gaze, visible anticipation of lifts—little things that individually would go unnoticed by the average audience member, but together add up to the overall atmosphere and success of a dance.

The second choreographer, Diana Winfree, danced in her piece along with three other women. Big, dark music by Murcof, Max Richter and John Nevin was matched by powerful, stretchy, gorgeous and grotesque lines; the mood reminded me of a sumptuously shot space horror film. Here, the panel dug into technical detail, offering critique to specific dancers about particular moments and choices, pointing out key images in the choreography that provide a thematic center to the work.

In each case, the choreographers and their casts sat on the floor, taking notes, asking questions, nodding. As an observer, I was fascinated by how the panel’s observations informed and broadened my own. I found myself wishing to see the pieces again, to pick up on little details I’d missed and see if I watched the work any differently. Happily, the opportunity will come this weekend at the Ruth Page Center.