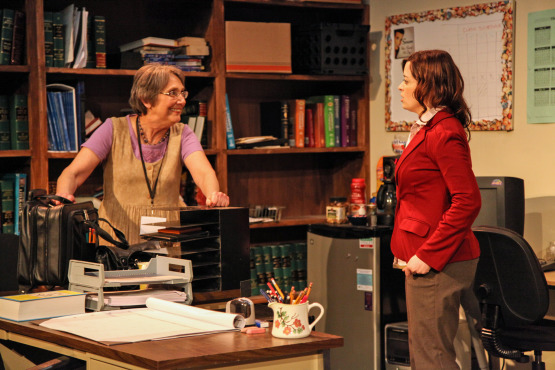 This summer Chicago audiences are given another chance to see “Principal Principle, ” a timely tale examining the potential polarizing effects of assigning corporate data-gathering systems to the educative process in an attempt to ascertain broad-based student “success,” while holding teachers responsible for the necessarily weighted outcomes. Set in a Chicago public high school, playwright Joe Zarrow, an artistic associate at Theatre Seven, has created characters that initially seem stereotypical, a useful device in telling what seems so complex a story. And yet they become beautifully fleshed, and these fulsome creations do not detract from the focused plotting of what might be expected to feel lecture-like; these are very real people, approaching a challenge they were never trained to meet, each in her own particular way, based on her skill set, while unable to fully commit to a system that considers each student a statistic rather than an individual, to be reached, positively affected and released into a world with some semblance of an academic and a social toolkit.

Four English teachers share, examine, cajole, quarrel and teach each other extremely hard lessons in their shared office. Working in a “middle of the road neighborhood” with a “ninety-five-percent African-American” student population, the women are widely varied in their approach to the onslaught of corporate Change Management that has travelled from the world of business to the public school classroom.

Ola (Elana Elyce), the department head, takes the path of least resistance, attempting to adapt to the new strictures while swallowing feelings that could be construed as complaints, and therefore modeling a lack of team cohesion. Denise (Barbara Roeder Harris), who will retire at the end of the year, holds her own during management confrontations, safe in her tenure and union support. Dynamic Shelly (McKenzie Chinn) searches for a way to secretly thwart the system. If we must choose a protagonist, it is Kay (Cassy Sanders) who leaves her corporate job and, after eight weeks of training, sets out to set the academic world on fire with her narcissistic drive to redefine her life as a molder of young minds.

Director Scott Bishop, a Stage Left ensemble member, guides his cast through the potential pitfalls of faulty pacing that could lead to the sullying of a message-play, hidden in a dark comedy, shrouded in a mystery. Zarrow’s play, based on his five-year experience as a Chicago public school teacher, at times amuses, but ultimately leads to the kind of open-ended finish that cannot help but spark debate. Ultimately, we are all waiting to see how this egg-scrambling of standardized public school education will affect the next generations and to find, accept and act upon our responsibility for the use of a business model for accessing teaching, what many of us understand to be one of the most complicated of art forms. (Aaron Hunt)