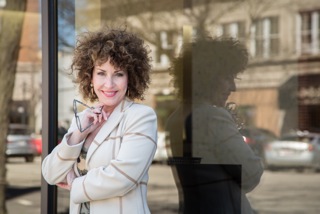 “Stoop Time, ” a new play staged by You&Me Productions, opens up with friends Jo (Angela Bullard) and Nora (Joni Arredia) having drinks, sharing laughs and recounting stories on Jo’s stoop. Their jovial drunken night is interrupted when a stranger, Reyna (Krystel V. McNeil), comes desperately seeking her lost necklace. Upon helping Reyna to find the necklace, Jo invites her to stay the night, but not without protest from both Nora and Jo’s ex-husband Wolfe (Colin Reeves). Wolfe reminds Jo that she always takes people in. Jo insists that Reyna is not a “stray,” that something is different about her. She turns out to be right. Reyna’s father Richard (Watson Swift), was the head doctor of the hospital Jo worked at while doing relief work in Haiti with Hut Outreach, when she was a nineteen-year-old student at DePaul University.

Through a flashback, we are taken to Haiti to get a peek at Jo’s experience. That experience consists of Young Jo (Kaitlyn Griggs), gaining a great affinity for a young sick girl she affectionately calls her “angel,” and falling in love with Richard. Against the opposition of her best friend Young Nora (Hilary Holbrook), Young Jo makes the decision to stay in Haiti. However, due to contracting malaria, she has to be flown back to the United States. Through a twist of fate, her little angel turns out to be Reyna.

What Joni Arredia has written comes from good intentions—to use her creative efforts to raise awareness and money to assist with the poverty in Haiti is truly a valiant effort—however, the story feels incomplete. The play spends entirely too much time on drunken banter, squirt-gun fights and the Western romanticism of relief effort. This Western romanticism consists of giving money or time for short periods then, afterward, the hurting nation becoming a complete afterthought.

We need outreach programs that allow students to go to impoverished nations and donate their time and resources. Yet, what happens when the donations and visits end? Jo searches for Reyna, but there is no mention of her making any other efforts to help Haiti.

In his Forbes article entitled “Haiti Doesn’t Need Our Help,” Tim Maurer discusses a similar question posed to a woman who came to Haiti on a temporary relief mission. Haitian farmers asked, “Are you coming back?” It was then that she realized, “Haiti doesn’t want or need our help. They want our collaboration.”

The same article states that the Haitian Revolution is to be thanked for the progression of freedoms of all people by being one of the first to chip away at the African slave trade. It would have been beautiful to see Haiti celebrated on that stoop, and see Jo and Reyna join forces to not just abandon a place that brought them together, but develop plans to get Haiti back to the nation it used to be. (Loy Webb)