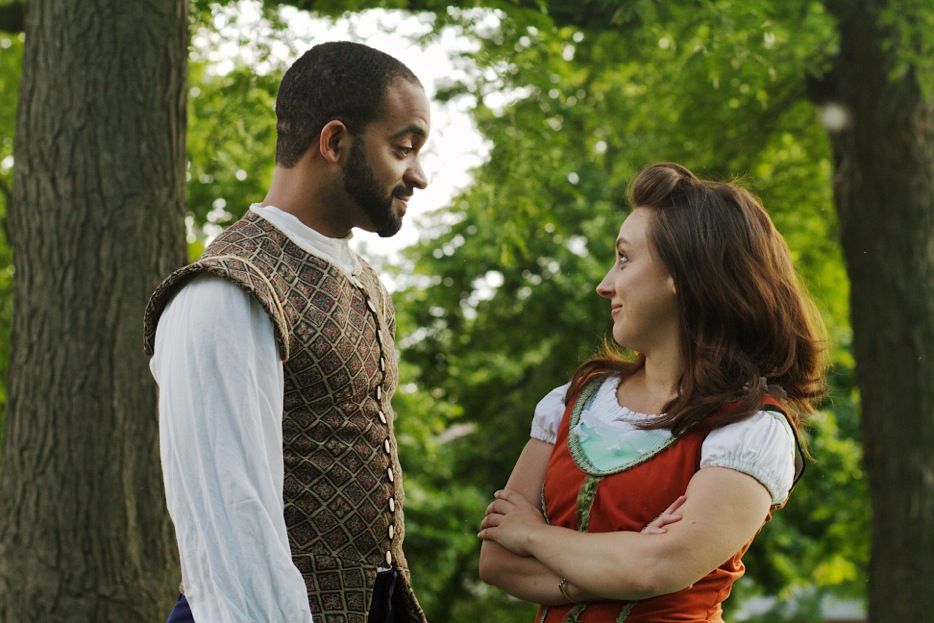 Some of the nicer things in life really are free, such as Shakespeare served al fresco on a summer evening by the talented and community-minded Midsommer Flight theater collective. Now in its third year, the troupe is presenting a rollicking, high-energy “Much Ado About Nothing” at Schreiber, Gross and Touhy Parks on the North Side.

I saw the production at Schreiber, an unpromising square of hardpan near Clark and Devon. The feng shui could have been better. Performing without a backdrop or well-defined stage, the actors struggled at first against the background hubbub—including one ad-lib moment when a passing cyclist, noting the kiss planted by Benedick (Martel Manning) on the pretty Beatrice (Ashlee Edgemon), shouted with perfect comic timing, “Give her another for me!” But once the plot picked up steam after a halting, exposition-laden opening, the audience became hooked on Shakespeare’s trenchantly comic take on the war between the sexes.

The trick to staging the most difficult-to-follow playwright in the most distracting of settings is to visually underscore the action. Director Beth Wolf gives us a good example of this in a scene between the literal and figurative bastard Don John (played with fine saturnine glower by Frank Sawa) and his henchman, Borachio (Jason Markoff, whose character and accent never quite jell). The two are working out a scheme to harsh the mellow of just about every upper-crust person in Messina, Sicily, where the play takes place. They fence as they devise their dirty work: first plant false stories about bride-to-be Hero (Vivian Knouse); then stage a phony nighttime tryst with Hero’s attendant, Margaret (Meredith Ernst) for the benefit of Hero’s fiancé, Claudio (the rubber-faced Adam Habben) and Don John’s legitimate and therefore hated half-brother, Don Pedro (Chris Smith); finally, manipulate Claudio, whose “honor” (read vanity) is wounded, into jilting and humiliating the innocent and loving Hero. The complex dialogue is synchronized with a well-executed series of thrusts, parries and feints. Meanwhile, we witness the difficult courtship of Hero’s cousin Beatrice and Benedick, two human porcupines brought together by another theatrical device, whereby their friends loudly discuss the supposed deep, unrequited love each has for the other, pretending not to notice that they are overheard by the subjects of their mischievous matchmaking.

It is during the aborted wedding scene that “Much Ado” switches abruptly from lighthearted romantic comedy to something far uglier and more disturbing. As Hero reels under the false accusations made against her and Beatrice rages impotently, we see the hidden face and true cost of a system that simultaneously idealizes and commodifies women. Hero’s father Leonato (Scott Olson) is ready to cast aside his own daughter for the alleged loss of her honor-bestowing virginity—a literal nothing. Only the intervention of the quick-witted Friar (a trouser part played by Sheila Willis), who orchestrates yet another staged gambit to clear Hero’s name, prevents this Sicilian idyll from spiraling into a full-blown blood feud. Having seen “Othello” (at Gift Theatre) and this play within one week, what strikes me is how similar the two plots are, with Othello conned by Iago into making much ado about a hankie, while the gullible Claudio, manipulated by Don John, becomes the Boor of Messina. 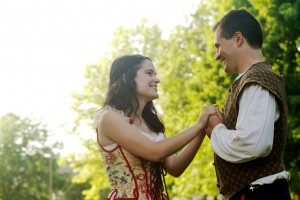 What differentiates the two plays is the comically serious relief of Dogberry (given a puppy-like turn by Jared Dennis) and his loyal crew of night watchmen, who save the day by overhearing Borachio’s drunken confession. While salt-of-the-earth Dogberry mangles both language and legal protocol, at one point literally tying himself in knots, he—unlike his betters—retains a tight hold on reality, and knows villain from victim.

The plot has holes, never explaining why Don John conspires against people he hardly knows or why Margaret fails to clarify that it was she and not her mistress who appeared at Hero’s window. But it all works, somehow, as the play shifts gears yet again at the end from a barely averted catastrophe back to romance, this time at a much deeper level of emotion and awareness. More than a battle of wits or a comedy of manners, “Much Ado” is a sentimental education, portraying the stages of relationship from generic infatuation to disillusionment to reconciliation to true marriage of mind, body and soul.

It’s Beatrice and Benedick who come the farthest over the course of the five acts, evolving from the lonely safety of bachelorhood to acceptance of their own incompleteness. Ashlee Edgemon and Martel Manning offer us convincingly zesty, bawdy versions of the two lovers, but both seem at the beginning a little too young and open, and Beatrice’s climactic line—“Kill Claudio”—would be more effective delivered in a quieter, more hissingly deadly manner. But such nuances are indoor stuff. Midsommer Flight gives us the meat of a marvelous play in a form that all can enjoy, for one evening turning a nothing scrap of city park into an imaginative something to behold. (Hugh Iglarsh)