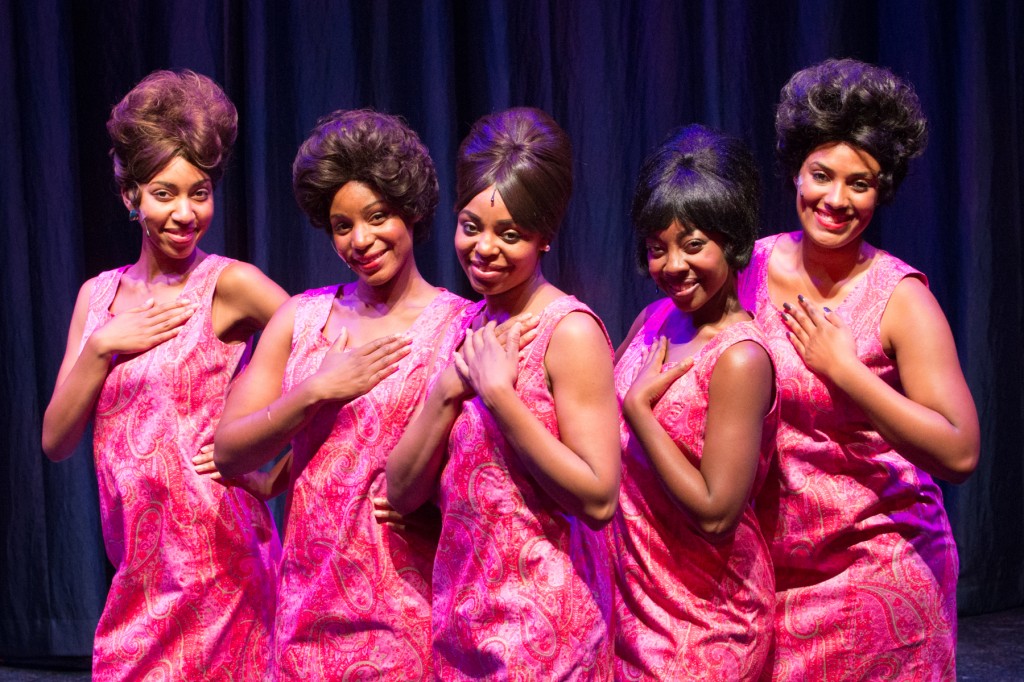 When Mary Wilson of the Supremes came through town late last fall, she recalled that the Supremes had no less than seven flops before catching on while another Detroit all-female group, the Marvelettes, had five consecutive hits, including Motown’s first-ever No. 1 hit.

This is history seemingly long-forgotten nearly fifty years later, that there was a time when Motown Records’ founder and president Berry Gordy was actually attempting to model the Supremes on the success of the Marvelettes. So much so, in fact, that he brought the Supremes to the same songwriting team that had written hits for the Marvelettes before the Supremes began charting.

While the Marvelettes have been largely relegated to an early footnote and a chorus of that first hit, “Please Mr. Postman” in Gordy’s own vacuous and self-serving “Motown the Musical,” leave it to Black Ensemble Theater to out-Motown Gordy himself by offering a three-dimensional portrait of Gordy and the inner workings of Motown in its world-premiere production “The Marvelous Marvelettes” by Reginald Williams and directed by Rueben D. Echoles.

No punches are pulled as we meet the teenaged Casinyets (“Can’t Sing Yets”) performing at a 1961 high-school talent show in Inkster, Michigan, where despite winning fourth place, their teacher Mrs. Sharpley (Ereatha McCullough) is so impressed that she brings them to the attention of Gordy (Robert N. Isaac).

All of these scenes of the past are presented as flashbacks at an airport where two former Marvelettes Juanita (Rhonda Preston) and Katherine (Deanna Reed-Foster) have a chance encounter and revisit old times. They act as a moral compass to the story, offering wry commentary and sage and mature 20/20 hindsight that stands in direct contrast to the puerile naiveté of the girls which Gordy exploits. “My door is always open, Motown is a family,” Gordy tells them, a metaphor for access which will always be in direct proportion to the girls’ obedience and successes, not necessarily in that order.

As their story progresses and the girls are dragged across the country from show to show with no rest or recovery time yet always singing their hearts out, the drug of fame along with all of the other pitfalls of show business are revealed in chapter and verse detail. The Act I finale has Georgia (Marquecia Jordan) fainting onstage from exhaustion.

The scene where details of the Marvelettes’ contract are revealed says just how little anyone in the group received for their trouble while, in essence, Gordy owned everything and had complete control. One by one, each member falls away when they cannot take any more. If this sounds depressing, the commentary of the elder Marvelettes together with the amazing body of music presented in first-class form make this a very life-affirming show.

From when we first see the Casinyets as a quintet to the first quartet and various incarnations to follow—including the Marvelettes as a trio and a grand finale where all younger and older Marvelettes sing and dance up a storm together—the point is made that what made every one of them special despite personal issues was an inability to express themselves any way but full-out and without anything less than integrity and collegiality.

These are not the sappy show voices and the sterile pit band of “Motown the Musical,” these are first-class singer/dancers playing each part with tight vocal harmonies accompanied by a killer band led by drummer and music director Robert Reddrick. (Dennis Polkow)